Upon returning from an extended holiday stay on the idyllic shores of Vancouver Island, the Duke and Duchess of Sussex decided to start the new year off with a bang. The couple shared on their Instagram page that they were stepping back from the roles as senior members of the royal family. While many were left shocked and stunned by the announcement, the Sussexes seem to have been moving towards a separation from the monarchy for some time. Their new website SussexRoyal.com was created by a digital agency based in Toronto and registered 10 months ago (the same company that helped Meghan create her ‘Tig’ blog). Along those lines, Meghan and Harry had been in the process of trademarking some clothing items along with educational materials and printed pieces like magazines and newspapers.

In addition, rumors of rifts and ongoing tension within the family is thought to have also played a part in the couple’s decision to branch out on their own. Meghan and Harry also have been showing signs of separating from the Crown as they hired their own PR firm Sunshine Sachs based in New York City, as well moved into Frogmore Cottage away from the other members of the royal family at Kensington Palace. Furthermore, the couple seemed to be carving out their own identity with their very personal documentary and popular Instagram account.

There was no indication based on Meghan’s appearance at the National Theatre that the couple were planning to release a new website along with a historic press release via their channels. Nothing seemed amiss apart from the fact that some royal watchers noticed Meghan was not wearing her wedding ring at the theatre–but the duke and duchess showed off considerable PDA at Canada House the day before and thus, proved they were still happily in their newlywed bliss bubble.

Following their ‘break the Internet’ press release of sorts, the media barrage began and the couple were celebrated by some who declared they had gotten back their ‘freedom’ and essentially removed themselves from the royal fishbowl–while others were not in agreement with the tact used to make such a groundbreaking move. Rumor has it the Queen told Harry to consult with the Prince of Wales before making any final decisions, and despite sending his father a draft of their proposal, it appears the couple largely decided to release their new plans and website without full backing from the Firm.

For now, many questions are raised about the Sussexes future within the monarchy and whether the couple can live in North America part-time and still retain their royal status. One thing is clear: Meghan and Harry are keen to carve out a progressive new role and extricate themselves from some of the restrictions of the royal rulebook. A seasoned blogger and royal expert told Oprah Magazine that the couple will maintain ties to the royal family and in addition to keeping their titles, the Sussexes will sustain other elements of royalty. “They’ll still live in Frogmore House. They’ll still have their security because it’s mandated by their positions. It’s sort of like the best of both words,” stated Royal Musings author Marlene Koenig. With 1.5 million likes on the Sussexes extraordinary statement, it’s clear many people support the couple and their hopes for a happily ever after. 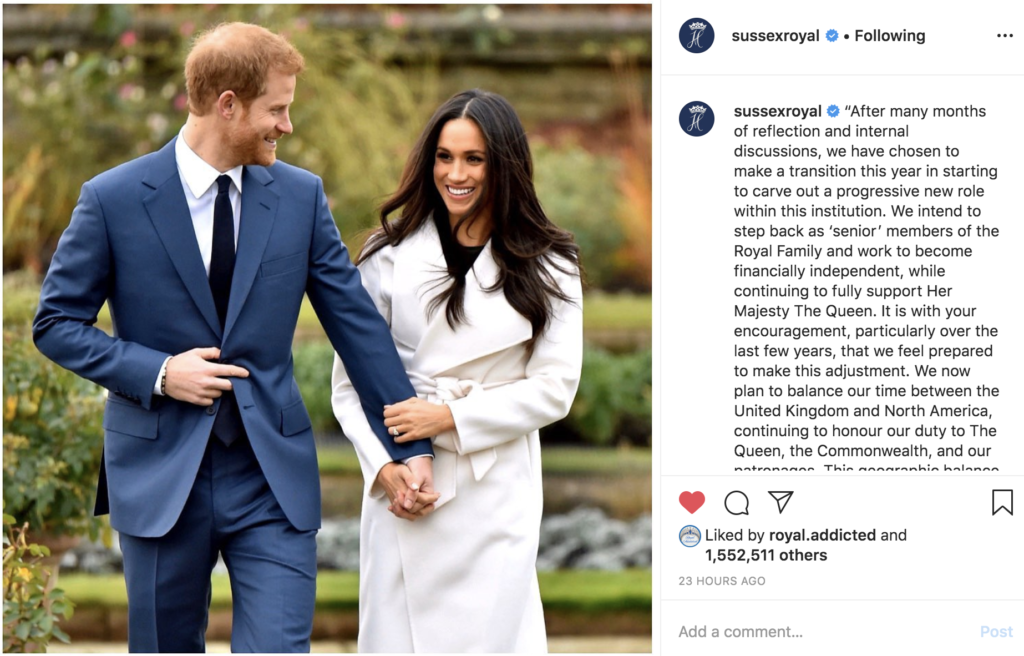