Before she was a worldwide fashion icon, Duchess Meghan was already setting the stage for her sartorial superstardom with a lead role on the TV show Suits. The now mom of one played Rachel Zane, a savvy and smart pencil skirt wearing paralegal with a killer wardrobe and closet full of posh pieces. The character was often styled in designer outfits and luxury labels which allowed the California born beauty to fine tune her fashion prowess and familiarize herself with brands like Gabriela Hearst which would later become a part of her royal rolodex.

Rachel Zane looked fierce in her standard uniform of fitted pencil skirt and button down shirt. For this scene, Meghan donned a sexy but sophisticated Burberry lace Prorsum skirt and carried a Yves Saint Laurent bag. The series costume designer Jolie Andreatta explained that this she believed that top-quality items were required for Rachel as a paralegal as she would be an investment buyer. 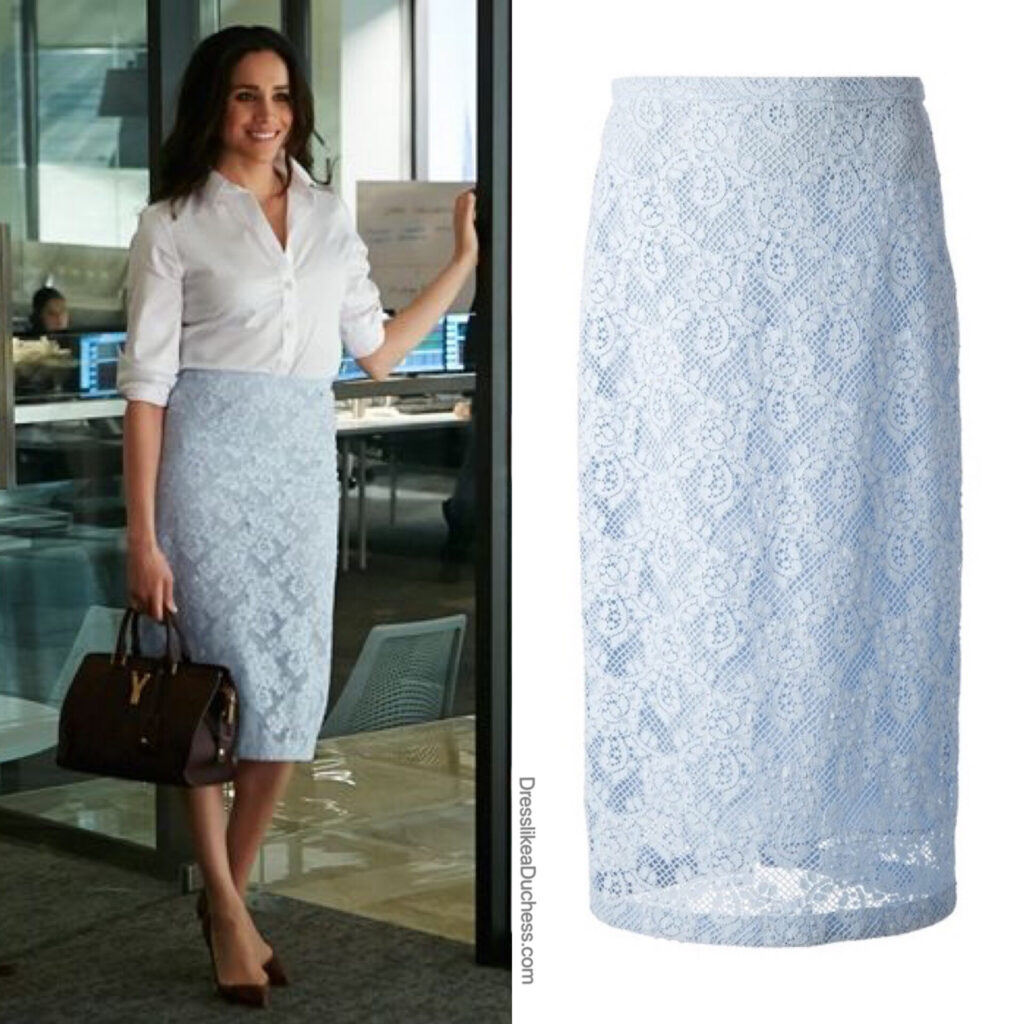 While Suits was a legal drama it also had plenty of romance and Meghan’s character was often filmed for bedroom scenes in checked robes, cozy cardigans and soft jersey pajamas. The monogrammed ‘Gisele’ set was perfect for career-minded Rachel when she was relaxing at home away from the hustle and bustle of the corporate ladder. 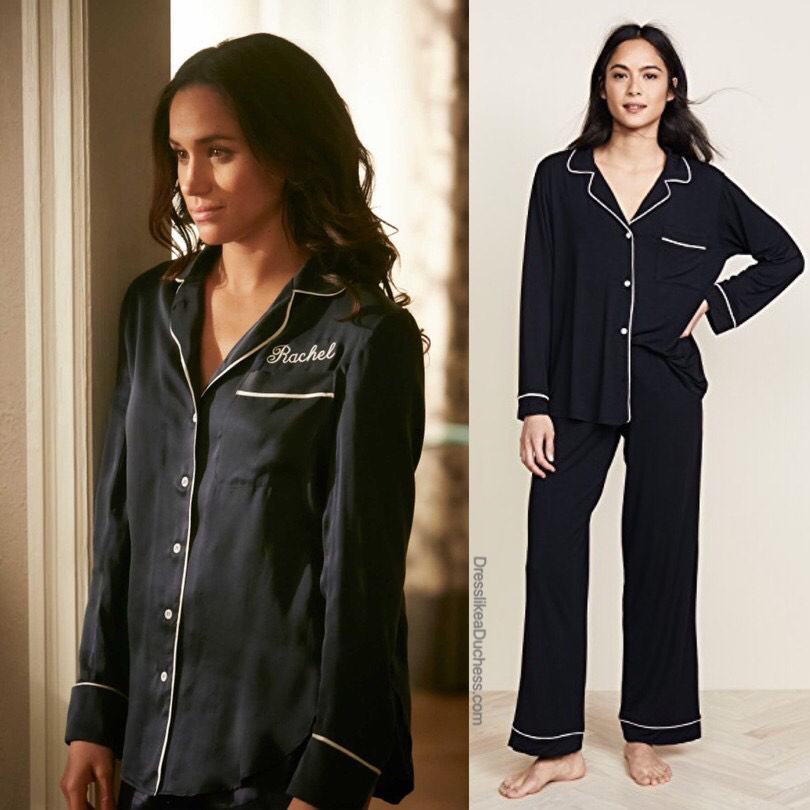 For a scene at her fictional home, Meghan was filmed in a cozy Gunnersbury cardigan by Gabriela Hearst in Season 7 Episode 5 “Brooklyn Housing.” Made with Italian yarns, the cashmere and silk blend cardigan has a collarless neckline and oversized fit perfect for staying in and writing legal briefs into the wee hours of the morning (SIMILAR). 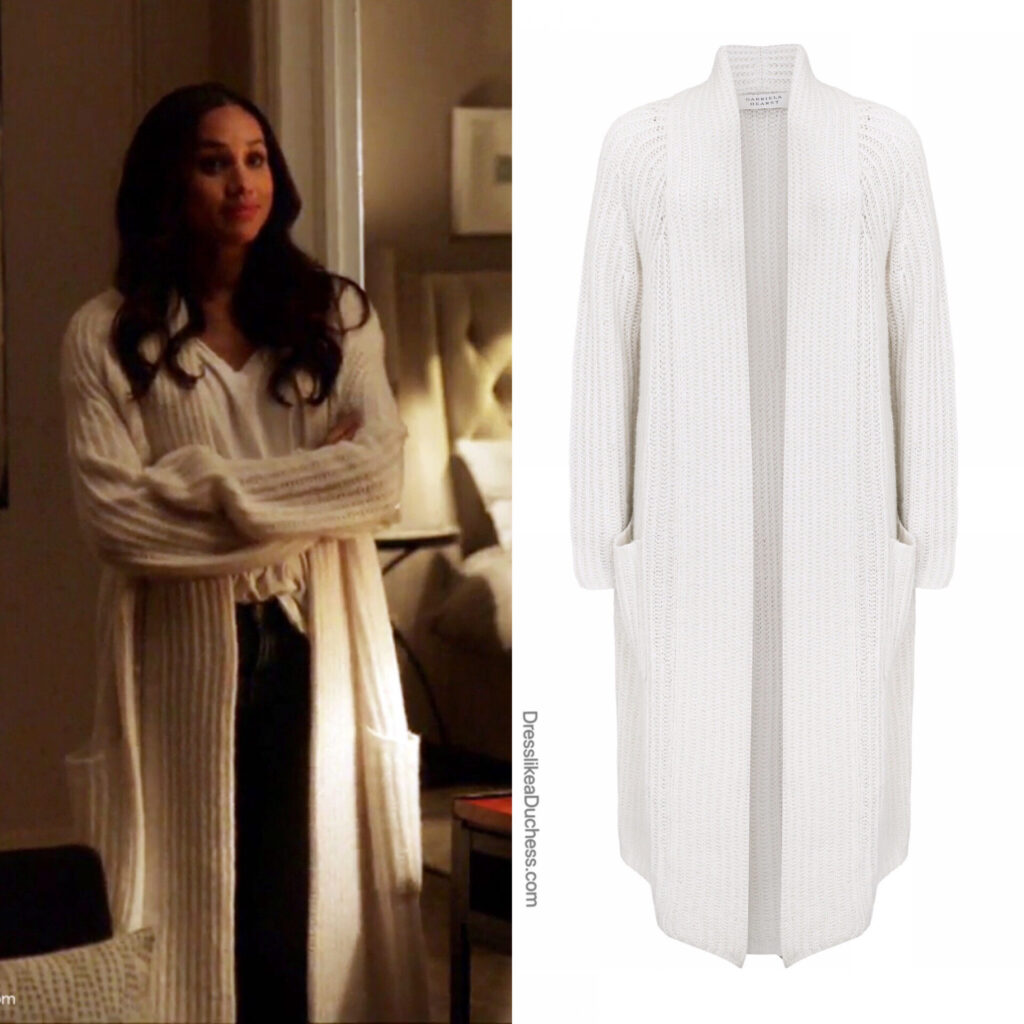 The duchess wore this elegant 14k gold necklace on Season 4, Episode 6 of the USA Network TV program. Later, she showed off the edgy wolf face motif necklace on her Instagram page alongside a Khai Khai Zodiac necklace as well as wearing the accessory for a helicopter ride. 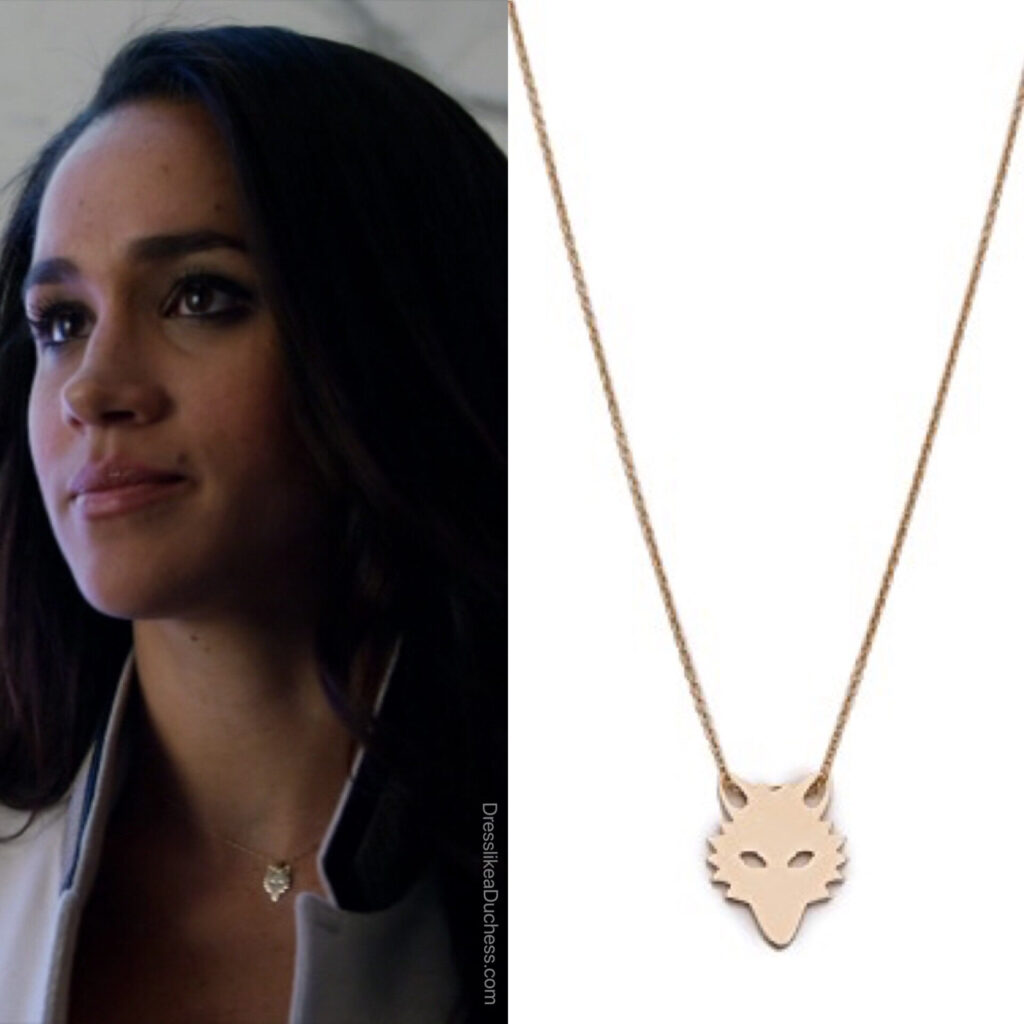 Dressed to kill or dressed to thrill, Rachel Zane’s character was all about sophisticated chic with a sprinkle of ardent ambition. One of the most memorable shots of Meghan’s character was from Episode 5, Season 7 “Home to Roost”  where Rachel Zane confronts boyfriend Mike Ross over his secret keeping and having to lie to Harvey. The actress was outfitted in a cashmere knitted sweater from Le Kasha. 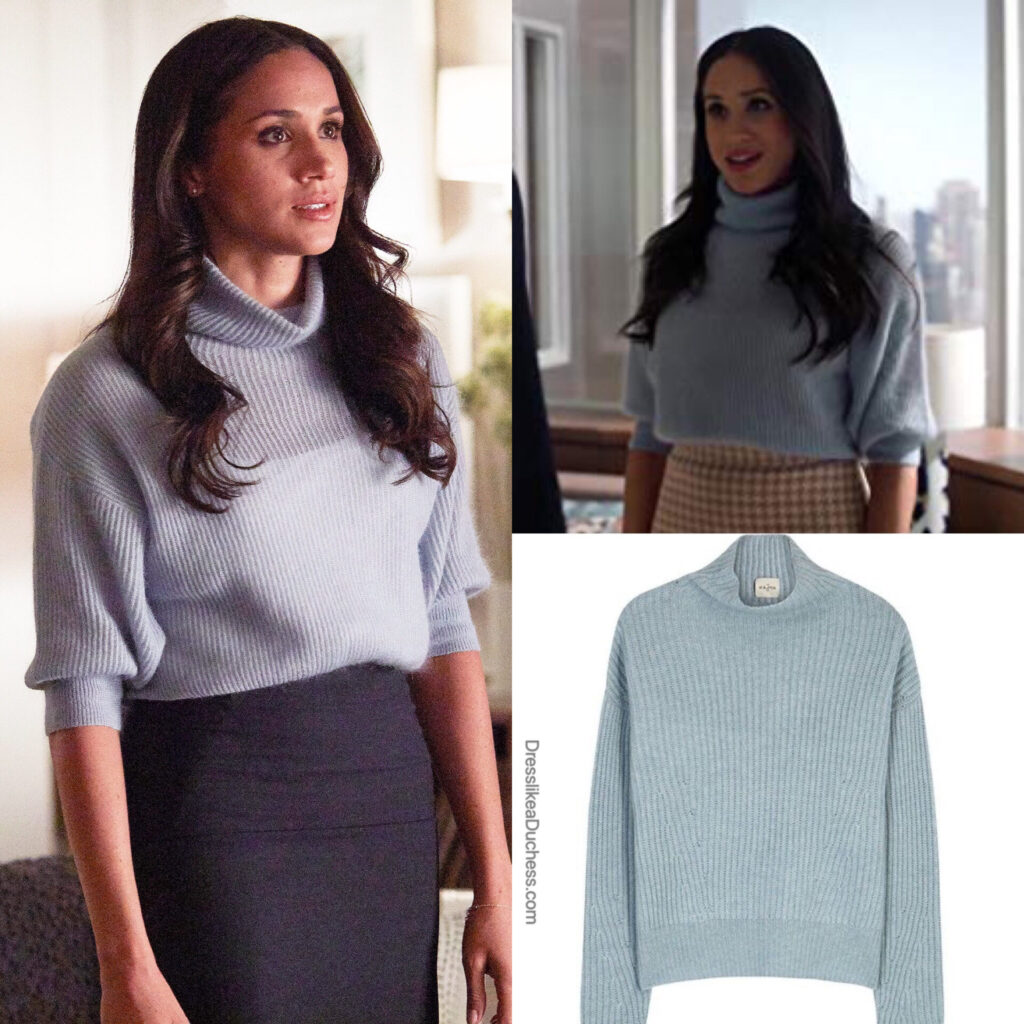 Meghan’s character was seen in multiple Burberry clothing items during the Suits series run and wore this white cashmere Northcombe coat from the British luxury fashion house in Season 4 Episode 6 “Litt the Hell Up” (perhaps a bit of fashion foreshadowing as Meghan would soon be crossing the pond to see her prince in Great Britain). 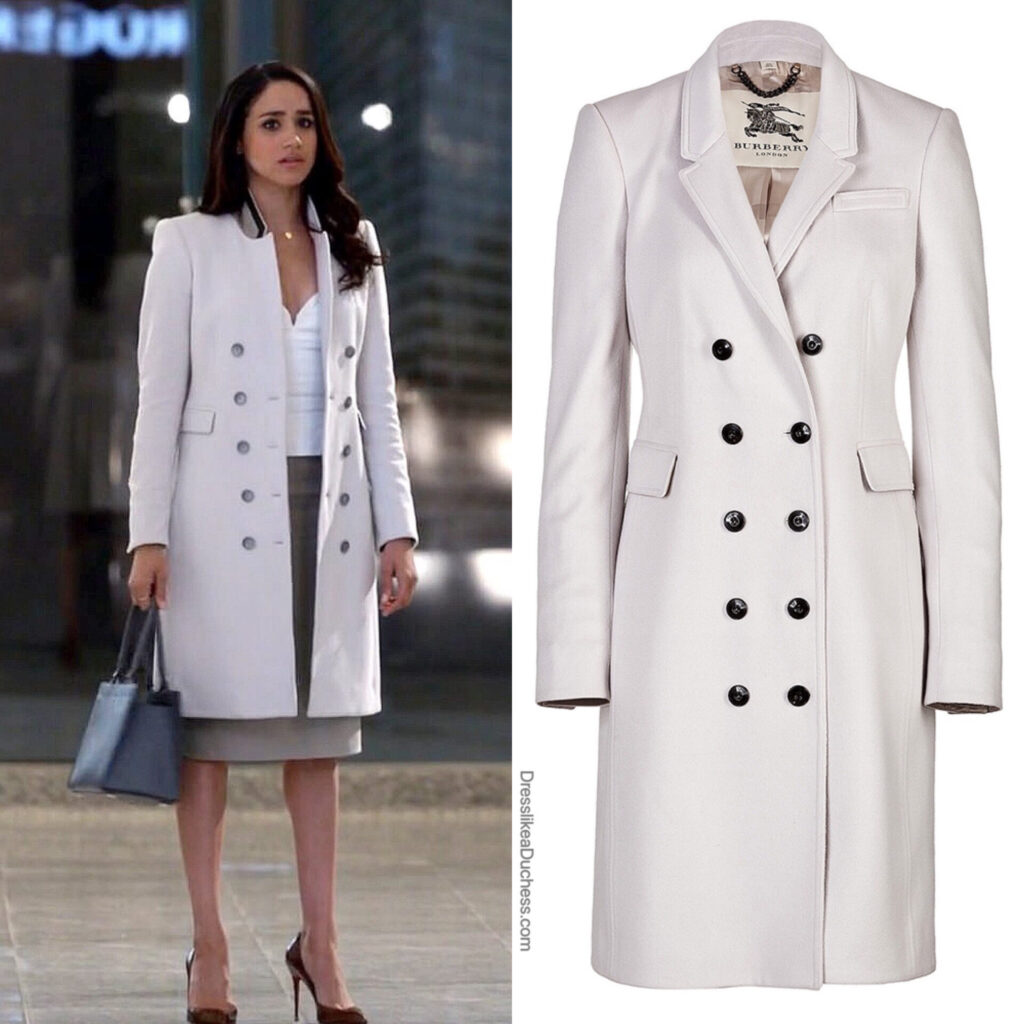