Moving day has come and gone and the Sussex twosome have officially moved into their newly renovated Windsor love nest. While the couples’ country home has received a major facelift, it’s likely Meghan and Harry will continue to make upgrades over time and after the arrival of the baby. As a foodie, Meghan’s kitchen is likely a work and progress and different gardening and outdoor projects may arise as the seasons change. Still, their new abode has already undergone some serious changes and is now family friendly!

The old Frogmore cottage was somewhat dilapidated and had very little security on the grounds. Staff quarters were described as ‘run down’ and the grounds likely needed major landscaping to be royal ready. If anything can be gleaned from the before and after photos of the property, the builders have accomplished their mission in giving the home a serious and stylish overhaul.

Meghan’s health conscious lifestyle will be very evident to visitors of the restored property and it’s been reported the duchess has opted for non-toxic paint throughout the residence as well as an eco-boiler and a floating spring floor for yoga sessions. The couple also have installed a custom dining room with both California and English influences as well as a “huge” gourmet kitchen designed by Meghan herself. It’s also been reported recently that Harry and Meghan have added an organic vegetable garden to the grounds of their private 10-bedroom dwelling.

Meghan and Harry’s custom cottage underwent a major exterior and interior design refurbishment and the duke and duchess had a little style assistance by way of Vicky Charles, the designer behind the Soho brand look. Charles has worked with George and Amal Clooney as well as Victoria and David Beckham previously. It’s been reported that Meghan is a fan of the 1920s and 1930s style of the Soho clubs with a bit of retro glamour and likely used the Soho stylist expertise in giving her and Harry’s home that old-school charm.

Meghan and Harry won’t need to get to London for passionate getaways as they will have plenty of quiet open space for a romantic retreat near their own home. Indeed, the royal lovebirds can have much more privacy away from staff and family at Kensington Palace but still be just a stone’s throw from one of the Queen’s primary private residences (a five minute walk). The dynamic duo can also take their newest Sussex squad member on enchanting mulberry picking excursions, lush lake walks or for a visit to have tea with Harry’s grandmother.

Meghan and Harry have already begun entertaining at their newly updated abode and have hosted Meghan’s wedding makeup artist, Daniel Martin. The cosmetic guru posted pictures on his Instagram story of the Windsor Royal Shopping Centre (just steps away from Frogmore Cottage) and a Windsor jewelry store and street corner.

Royal reporter and journalist Omid Scobie reported exclusively on Twitter that Harry and Meghan were “extremely happy” with their new home and thoroughly enjoyed their first full day on the property. A serendipitous start to the new Sussex sanctuary! 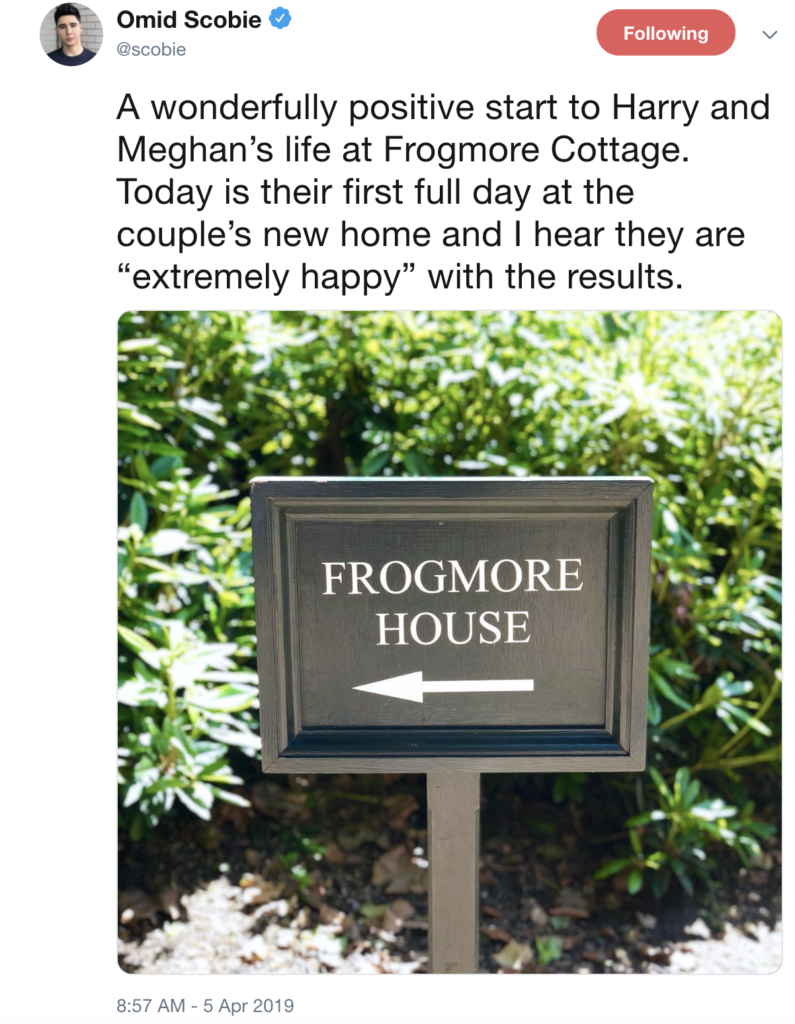