While the Duchess of Cambridge and Duchess of Sussex are practically flawless at nearly every engagement and hardly ever seem to make even the slightest style slip-up–they’re still human like the rest of us and occasionally will have a fashion flub. But let’s not forget that both ladies are seen at hundreds of engagements a year so it’s only natural (and normal!) for the occasional clothing or shoe mishap to occur. So in the interest of feeling better about ourselves, let’s take a look at some of the garment gaffes we’ve witnessed from these two impeccably dressed women.

While not technically Kate’s fault, the duchess likely felt a bit awkward when she dressed in an identical Missoni coat as one of the guests at a wedding she attended with Harry and William in Gloucestershire in 2014. 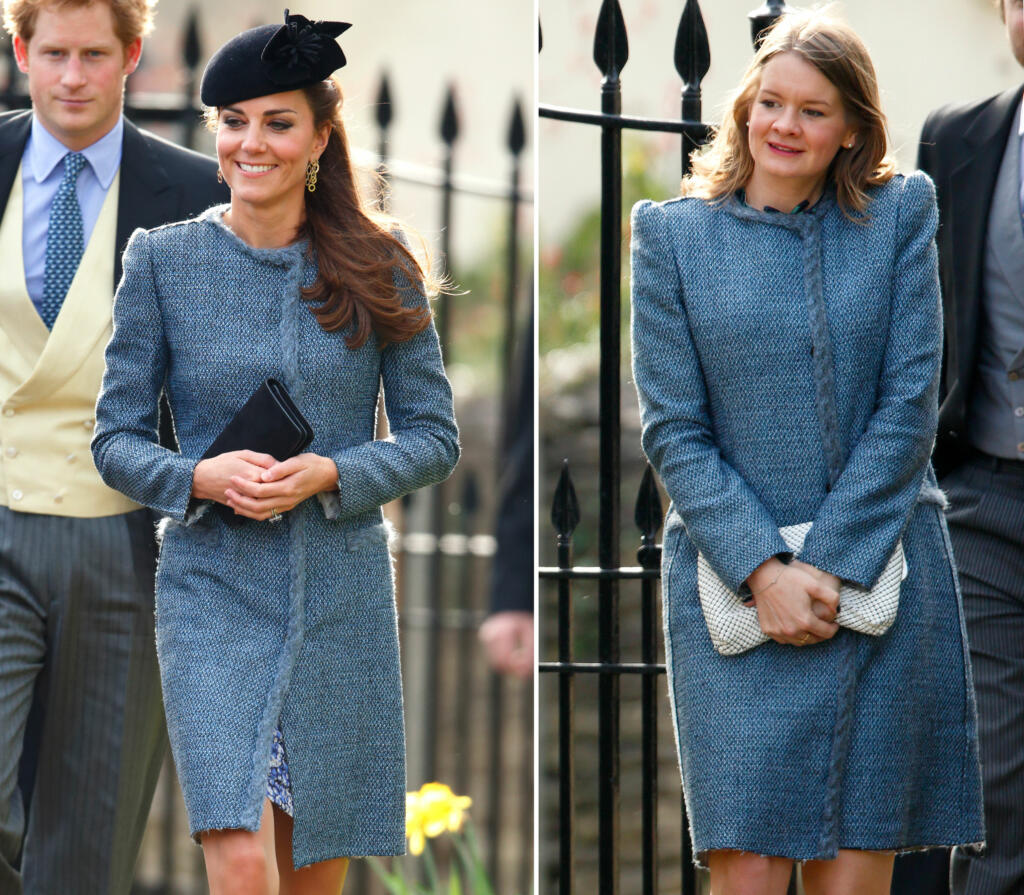 Meghan and Harry’s Royal Tour Oceania was a non-stop two week travel blur and Meghan changed outfits many, many times. As such, it’s totally relatable that after all that jet lag and some serious sleep deprivation that she would forget to remove a tag from one of her dresses.

Kate Middleton rarely makes a style snafu so it was slightly surprising when she opted for a light colored bra underneath her black Temperly London dress for a gala in London in 2014. In defense of the duchess, the flashbulbs from the cameras likely illuminated her undergarments otherwise no one would have been the wiser.

The Duchess of Sussex was undoubtedly a little nervous when she and Harry landed in Dublin to undertake her first royal tour, thus, it’s not surprising she experienced a little bit of forgetfulness and didn’t remove the plastic from the protective metal feet of her Strathberry tote. While eagle eyed royal watchers may have noticed, it was hardly obvious Meghan’s bag was still under wraps. And indeed, the Meghan effect took over and the bag sold out within hours. Get Meghan’s Dublin outfit style HERE

Even with every precaution taken, the weather or the surroundings can cause a serious style struggle. Kate and William as well as the Irish guards seemed to have a little laugh when the duchess got her heel stuck in March 2013 in a drain during St Patrick’s Day festivities.

A temporary stitch was hardly a wardrobe malfunction of epic proportions but a few media outlets noticed Meghan’s J.Crew coat had not had the white X tailor tacking removed prior to her walkabout with Prince Harry in Birmingham. The stitch looked like a purposeful design element so this happy accident is totally forgivable and may even start a new trend.