The Duchess of Sussex stepped out at Trooping the Colour with the royal family to make her first official debut as a new mom. As one of the biggest days on the royal calendar, the appearance created a media frenzy and many were excited to see Archie’s mom for the first time in a month. While Meghan’s return to the spotlight was heavily anticipated, the Duchess of Cambridge had a similar experience when she made her first appearance following the birth of her first son, Prince George.

The Duchess of Cambridge gave birth to Prince George on July 22, 2013. The new mom greeted fans and well-wishers at the Lindo Wing immediately following the birth but did not make any public appearances until August 30, 2013 when she accompanied Prince William to Holyhead, Wales. Reportedly, Kate opted not to leave her new bundle of joy in the care of a nanny but rather had grandma Carole Middleton tend to the newborn while she and Will attended the Ring O’Fire Coastal Marathon.

For the outing just five weeks after giving birth, Kate opted for a casual but smart ensemble. The outdoorsy event called for a blazer and Kate wisely selected a Ralph Lauren hacking jacket. She paired the tweed topper with a printed Zara top featuring a bow. It’s believed Kate finished the look with Paige Denim Skyline skinny jeans in black; according to the rumor mill Kate returned to her pre-pregnancy wardrobe and did not wear Topshop maternity jeans as some suspected. Finishing off the look, Will’s wife opted for Pied A Tierre black wedges. For accessories, Kate selected diamond earrings by Kiki McDonough called ‘Grace’ and added her Gucci watch. 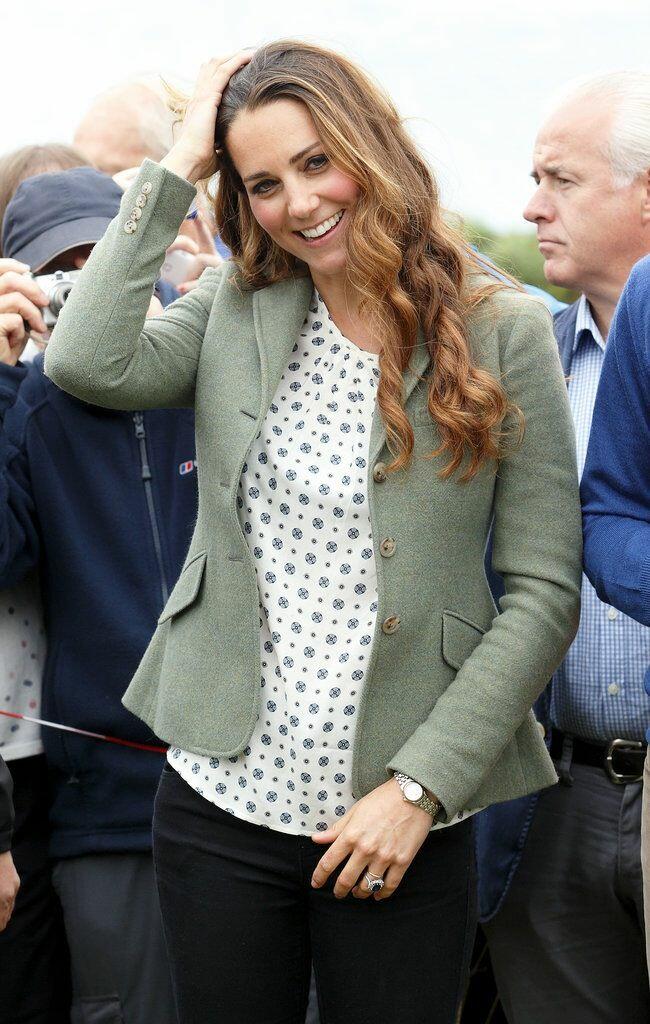 While Kate looked beautiful as usual, perhaps most striking about her appearance was her voluminous hair which appeared very curly with the help of a little seaside humidity.

It’s also of note that Kate’s official appearance was not the first time she was photographed post-delivery. In fact, Kate visited her local Waitrose supermarket in Anglesey in a classic striped long sleeve shirt by Ralph Lauren, Sebago Bala boat shoes and simple dark skinny jeans and sunglasses. Locals didn’t seem to notice they were in the presence of a princess (ok, duchess)! Kate stopped by the market on August 27, 2013 just four weeks and a few days after having her baby boy (and three days before her first official royal engagement).

Duchess Meghan’s first post baby appearance following the St. George’s photo call where she and Harry presented baby Archie came last weekend at Trooping the Colour. The Queen’s birthday parade is a special occasion for the royal family and Meghan’s appearance was a nice way for the duchess to show her respect for the monarch. Archie Harrison Mountbatten-Windsor was born on May 6th, thus, Meghan’s only been on maternity leave for four weeks as the celebration took place on June 8th.

The new mom looked beautiful in a custom cape dress by Givenchy. The blue color appeared to be a rich navy and was in perfect coordination with Meghan’s Noel Stewart navy fascinator featuring blue and white feathers. Meghan accessorized with leather gloves and emerald cut stud earrings as well as a new sparkly silver ring (possibly an eternity band and present from Prince Harry). The duchess later removed the cape to show off her Givenchy dress with white contrasting sleeves which seamlessly matched her feathered fascinator. Perhaps in homage to recent D-day tributes, Meghan’s dress featured a military style detail with gold epaulets.

Kate and Meghan both looked beautiful for the first official outings as new moms and their fashions were perfect for their respective occasions.