The Revealing Body Language at Trooping the Colour

Rumors of a royal rift have dogged the Cambridge and Sussex families since Prince Harry brought his new lady love into the family but is there really tension between the ‘Fab Four’ or is this all hearsay, gossip and rumor? Well, lets take a look at Kate and Meghan’s latest outing to see if their body language reveals clues into their dynamic.

The first very noticeable difference for this year was that both the Duchess of Cambridge and Duchess of Sussex were in the same carriage along with the Duchess of Cornwall. Some people claimed this was deliberate so the Sussexes would not be booed at the parade, while others say it was an effort to ensure Kate, the future Queen consort, was most heavily photographed. While all this speculation is driving sales and clicks, it’s not necessarily based in truth. In fact, with both duchesses in the same carriage–there was a sense of great unity and friendship.

Some media outlets claimed the Duchess of Cambridge showed signs of tension with her posture indicating a bit of ‘self-diminished’ curling rather than a projection of confidence and ease during the ride down the Mall, but this was hardly accurate. In fact, the mom of three appeared especially comfortable and was laughing and giggling (along with waving) during the festive jaunt.

Meghan looked especially jovial and seemed excited and eager to participate in the day’s celebrations. She did not look angry, upset or unhappy. She was even seen gesticulating and chatting with Kate–possibly about newborn baby Archie!

This year there was another major difference–Kate and Meghan stood on opposite ends of the balcony. In the previous year, the Duchess of Cambridge was front and center near the Queen directly ahead of Harry and Meghan. 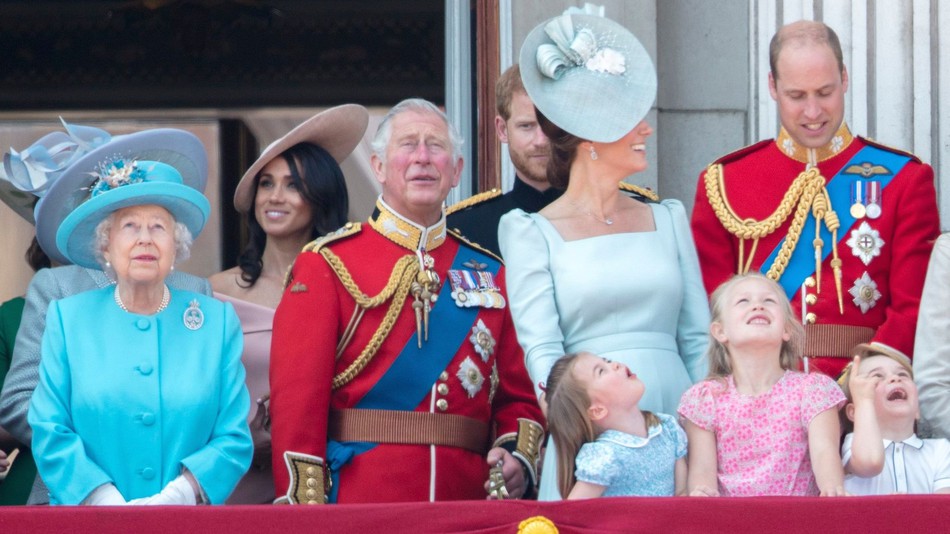 Like the previous year, Prince Andrew and Prince Charles acted as ‘bookends’ around the monarch.

As Kate and William’s family grows, it’s hardly possible to keep them in the front of the balcony, plus, hierarchy dictates that Kate and William are positioned ahead of Harry and Meghan due to their future roles within the monarchy. As the senior royal, William is expected to be more prominent. This year the Cambridge family took the spot to the right of the Queen.

Some outlets claimed Meghan was “shuffled to the back of the balcony” but this is not true either. Due to the line of succession, Meghan and Harry are not going to be side by side with the Queen or the Cambridges. Plus, Prince Andrew stood next to his mom this year as a replacement for his father the Duke of Edinburgh as he did in 2018, thus standing ahead of the Sussexes. On the balcony, Meghan looked relaxed and comfortable and was spotted chatting with her husband and smiling before the fly past.

Clearly, many news outlets want to create sensational headlines but the truth is that Meghan’s presence at Trooping the Colour signified her importance within the family structure and her inclusion was more than enough of an indication that there’s no feuding or fighting but rather familial solidarity.