The Duke and Duchess of Sussex have made no effort to hide their love and often put on tactile displays while performing their royal duties. As smitten newlyweds and new parents, it’s no wonder their love is overflowing. Still, even for these two royal romantics there are moments that seem extra special.

With little baby Archie due any moment, Harry and Meghan couldn’t hide their affections on stage at Wembley Stadium. The nuzzle wasn’t there only traces of touchy-touchy behavior as the couple also held hands and shared serious love gazing at the We Day UK event.

The Duke and Duchess didn’t try to hide their couple cuteness at a baseball game outing where the duo were canoodling in the crowd and doing some serious hand holding.

Despite his rather sweaty state, Prince Harry was excited to see his love in May 2017 when he took a break from playing the field (literally and figuratively) to kiss his girlfriend.

Captured showing more than a little affection at an Invictus Games event, Prince Harry and Meghan Markle’s chemistry was off the charts. The couple appeared to be flirting and laughing all night long during a Bruce Springsteen performance in the executive box at Toronto’s Air Canada Centre in October 2017.

Meghan and Harry didn’t try to hide their love at a public polo match as the two did a little bit of sly snuggling and exchanged a few pecks this summer. 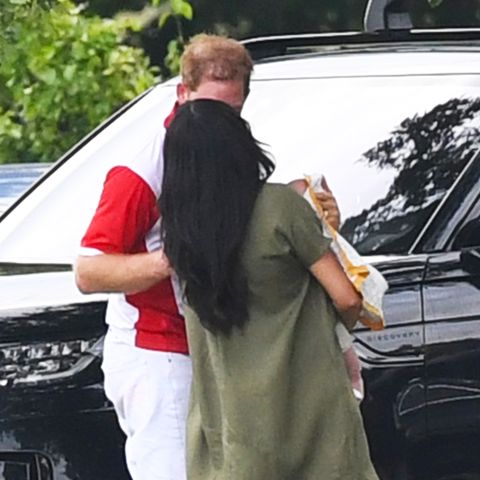 The Sussexes were seriously packing on the PDA at a charity Polo match and gave the world a sneak peek into their fairytale love story.

The day they announced their pregnancy to the world was a very special day for Harry and his missus–the couple looked loved up at Princess Eugenie’s wedding on the day of the big news.

No matter where they are in the world, Harry and Meghan seem to share a special bond. The duchess frequently holds Harry’s hand while also pulling his arm close as a way to draw him into her space and keep their unity extra strong.

Following their wedding, the royal lovebirds couldn’t keep their hands to themselves and got carri-aged away with their sweet smooches.