While sporty Kate might have more of affinity for sneakers and sweatpants, the Duchess of Cambridge is a pro at going glam. From lavish banquets to regal receptions, the mom of three knows how to dress to impress and often finds herself wearing the heavy headpieces with no sign of struggle. Even on her wedding day, the duchess looked chic in a pricey piece which emphasized her veil and perfectly complemented her McQueen gown. Thus, it’s easy to see why Kate is a dynamo when it comes to carrying off a crown.

For a white-tie reception in December 2013, Kate looked stunning in the Lotus Flower tiara (which originally belonged to the Queen Mother) and was actually made from the stones of a necklace. The duchess donned a pale blue eyelash lace Alexander McQueen dress for the private reception and no other photos emerged of Kate’s gorgeous gown! The event marked the first time Kate wore a sparkling topper since her wedding day.

In October 2015, the Duchess arrived at Buckingham Palace for ‘courtside’ seating next to President of China Xi Jinping as well as the Queen, who was also seated at the head table. For her first state banquet, Kate wore a red sequin Jenny Packham gown to represent the Chinese flag and pay tribute to the culture. On her head, the duchess opted for the Lotus Flower tiara (which is often called the Papyrus tiara) which she had worn for the palace party in 2013.

At the state banquet in June 2019, Kate looked angelic in a a white ruffled gown with cap sleeves by Alexander McQueen. The stunning gown looked even more resplendent with a little twinkle from the royal’s Queen Mary (Lover’s Knot) tiara featuring diamonds and pearls. 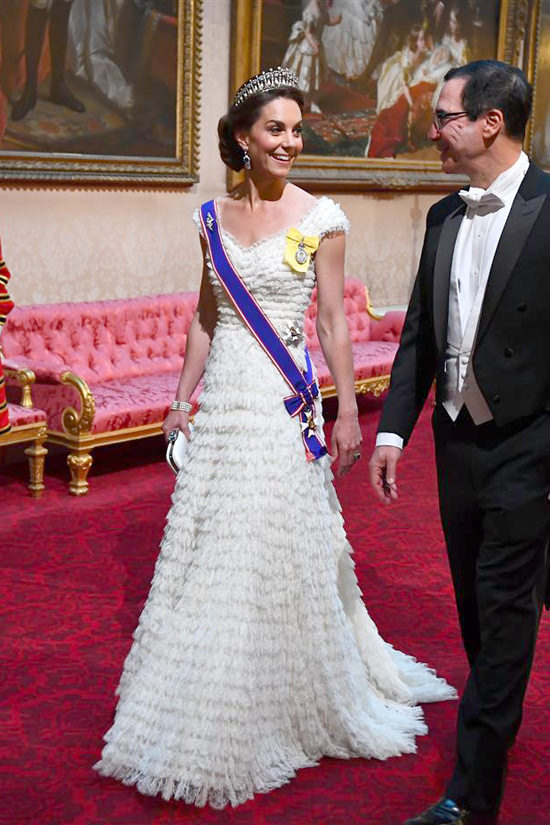 The future Queen consort dazzled in an icy blue Alexander McQueen gown for a state banquet for the King and Queen of the Netherlands in October 2018. The mermaid gown was a perfect choice for the glitzy affair as it perfectly coordinated with the Lover’s Knot tiara.

In all likelihood, the Duchess of Cambridge paired her frothy fairytale Jenny Packham gown with a pair of glass slippers as the look was so reminiscent of the pale blue dress worn by Disney favorite Cinderella. For a reception for the Diplomatic Corps in 2018, the British beauty opted for Princess Diana’s Lover’s Knot tiara once again.

The duchess gave royal watchers Grace Kelly vibes in a slinky midnight blue velvet dress with a sweetheart neckline for a glam reception at Buckingham palace in December 2019. For added luster, Kate topped off the look with the Lover’s Knot tiara as well as a statement necklace, the Queen’s earrings and a stunning new diamond ring.

For her wedding day in April 2011, the duchess wowed in a lace dress by Alexander McQueen as she wed Prince William in front of millions! The iconic dress was hardly the only breathtaking part of her bridal ensemble as she also borrowed the Queen’s Cartier Halo tiara for the momentous occasion. 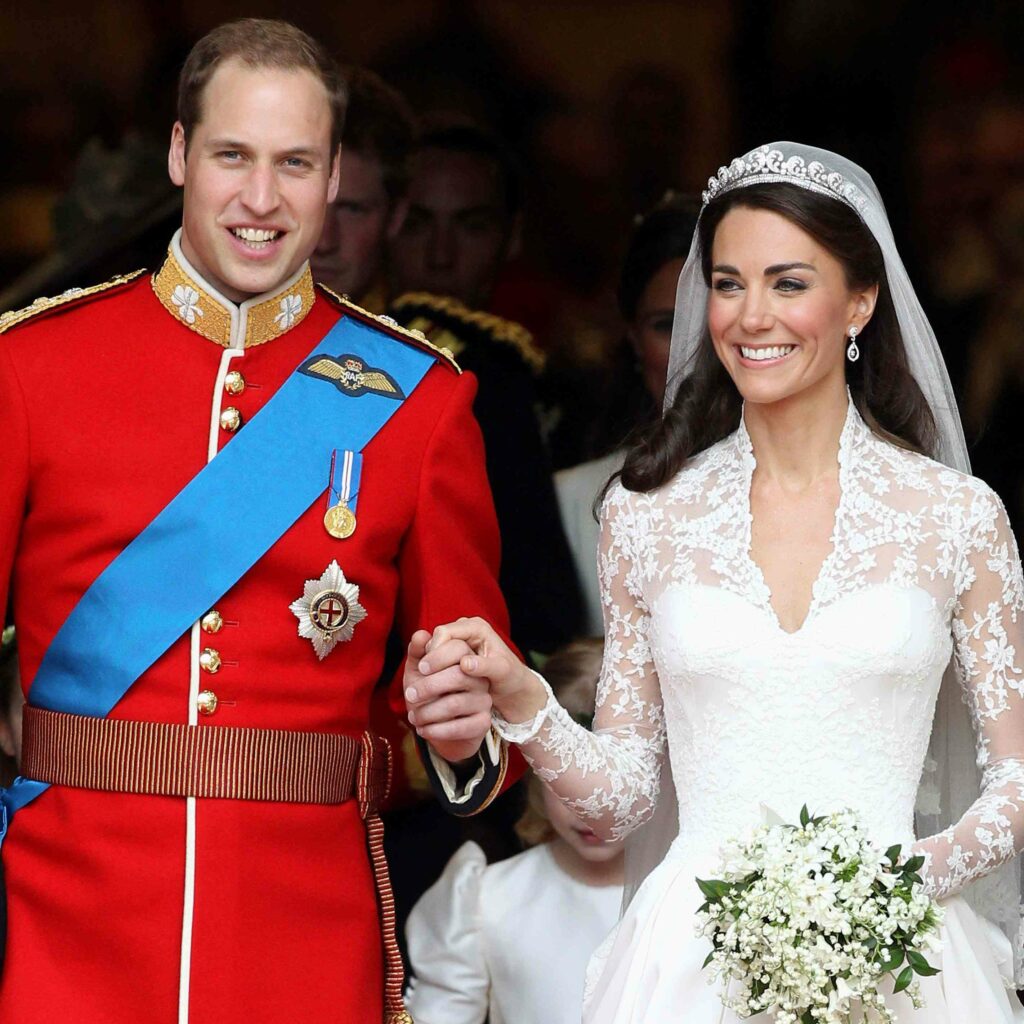