Dress Like a Duchess identified it first! Meghan Markle appears to be wearing the Cromford Top and Arreton Skirt from Roland Mouret’s new Exclusive Collection in the never-before-seen portrait of her and Prince Harry observed in the background of the Queen’s Audience Room at Her Majesty’s London residence.

Hello! reports that the portrait is presumed to have been taken by Alexi Lubomirski sometime in December and shows the couple in a sweet pose with Meghan’s hand across Harry’s chest. It appears to be a part of the couple’s engagement photo session which took place in winter of last year.

In the displayed photo, Prince Harry is seen in a perennial favorite–a classic blue suit while Meghan is wearing an icy pale pastel blue dress. We believe we’ve identified the dress as a Roland Mouret design.

It would come as no great surprise that Meghan would wear the famous French designer for official photos as he was seen on Meghan’s now-deleted Instagram before her days as a duchess.  Meghan even affectionally called the designer ‘Roly’ on her social media. 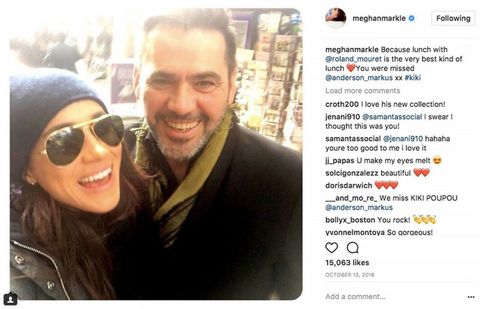 It would also make sense that Meghan would wear another Roland Mouret design as she recently stepped out in a navy Barwick dress by the designer and personal BFF on the night before the royal wedding. The newlywed was even rumored to have considered a Mouret wedding dress creation for her evening bridal look but instead wore all-female designers like Clare Waight Keller (for Givenchy) and English designer Stella McCartney.

In the Queen’s framed photo, the Duchess of Sussex’s pale blue sheath style looks similar to some of Meghan’s other figure flattering favorites with cap-style sleeves and a slim fit. The style also has some of the ruching details that Harry’s wife loves as well as the pencil skirt style she is known for wearing as her character Rachel Zane on the USA cable television show Suits.

Roland Mouret posted a picture on Instagram of the new separates only two days before the picture was spotted in the Queen’s room at Buckingham Palace. 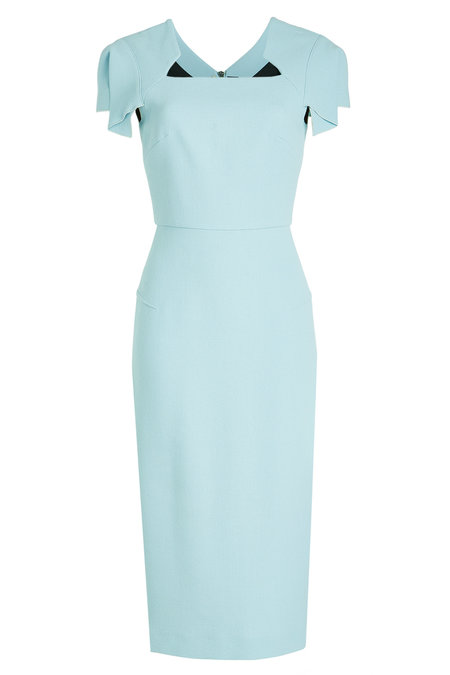