Some were surprised when the Duchess of Cambridge stepped out at Prince Harry and Meghan Markle’s wedding in what appeared to be a cream colored dress coat. While certainly not a style sin for an ordinary formal event, it appeared to miff those who argued that wearing the color white is long understood to be a fashion foul for a royal (or regular) wedding. 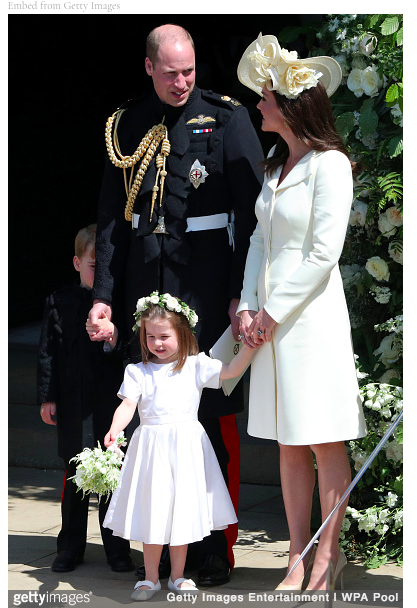 But turns out after all the glitter settled from the storybook wedding–the whole Kate Gate was merely fake news. Indeed, Kate elected to wisely blend into the background on the much anticipated day with a ‘primrose yellow’ wool silk tailored coat by Alexander McQueen.

Some were so startled by the light snowy style that they even questioned whether the yellow design was swapped out at the last minute for another outfit. Many had assumed the Duchess wore her vanilla fit-and-flare number by McQueen which she had recycled for Charlotte’s christening, to Belgium in 2017 and to the Trooping of the Colour in the past. 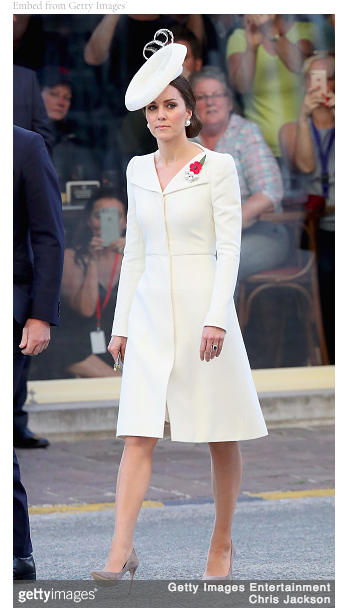 It turns out that after all the fuss and fury–it appeared as if the Duchess of Cambridge pulled a bit of a Houdini act and created a pregnancy style that mirrored her recycled coat but was in fact a new light yellow design. Why recreate a wardrobe piece you already own and have worn numerous times? Well, it was Kate’s way of shunning the style spotlight and letting the bride, the new Duchess of Sussex, take center stage.

In addition, Kate likely selected a summery frock that will feel very light and airy for the warm day at Windsor Castle. Many of her favorite blue styles might have felt a bit heavy or dark for a celebratory occasion. Also, the McQueen dress coat is very plain and simple. No print, no fancy embroidery and no sequins or other eye-catching embellishments which would garner attention and steal from the highlights of the day, namely Harry and Meghan. 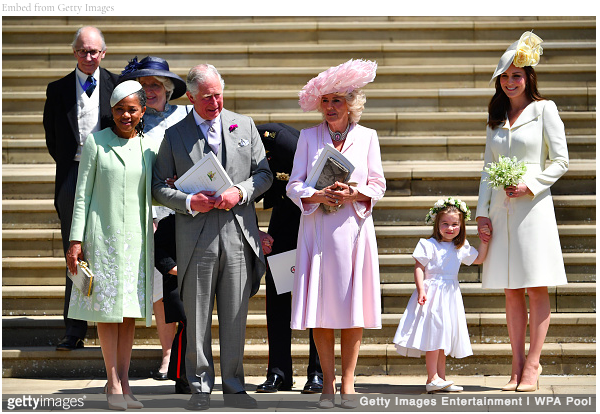 Kate is not one to shy away from having multiples made in her beloved style favorites. She has the same Amanda Wakely dress in three colors including pale blue and forest green and she has worn the same Emilia Wickstead pleated skirt dress on more than one occasion in pink and blue.

Kate’s royal wedding style had giveaway fashion clues that it was not the same as the old Alexander McQueen cream coat. For one, style sleuths figured out that Kate’s new coat has buttons on the sleeves and more pronounced pockets on the older style as well as darts on the bust being spaced differently between coats.

In all likelihood, Kate needed a dress to fit her size and shape after only a few weeks post-partum but she didn’t want to wear anything new or flashy. As the ultimate act of sisterly love, she wore a ‘pretend’ repeat so as not to distract from Meghan Markle’s big day.

Kate’s final royal wedding style consisted of a yellow coatdress by Alexander McQueen, Philip Treacy hat and Jimmy Choo Romy 100 pumps. She wore Kiki McDonough lemon quartz earrings and a citrine ring which may have been a gift from Prince William after the birth of Prince Louis in April. Though some media outlets say the ring is actually a recycled sparkler from Catherine’s collection of shiny things and may have been an accessory she wore in 2008. The Duchess certainly has a lot of style secrets!