Meghan Markle never got the chance to meet her late mother-in-law but it doesn’t mean she can’t honor her in all sorts of ways and namely through her sartorial salutes. In fact, Meghan is already mirroring many Harry’s mother’s style choices and has even worn her aquamarine ring as well as her butterfly earrings and cuff bracelet. And Meghan will likely continue to select outfits reminiscent of Princess Diana as she progresses in her pregnancy. 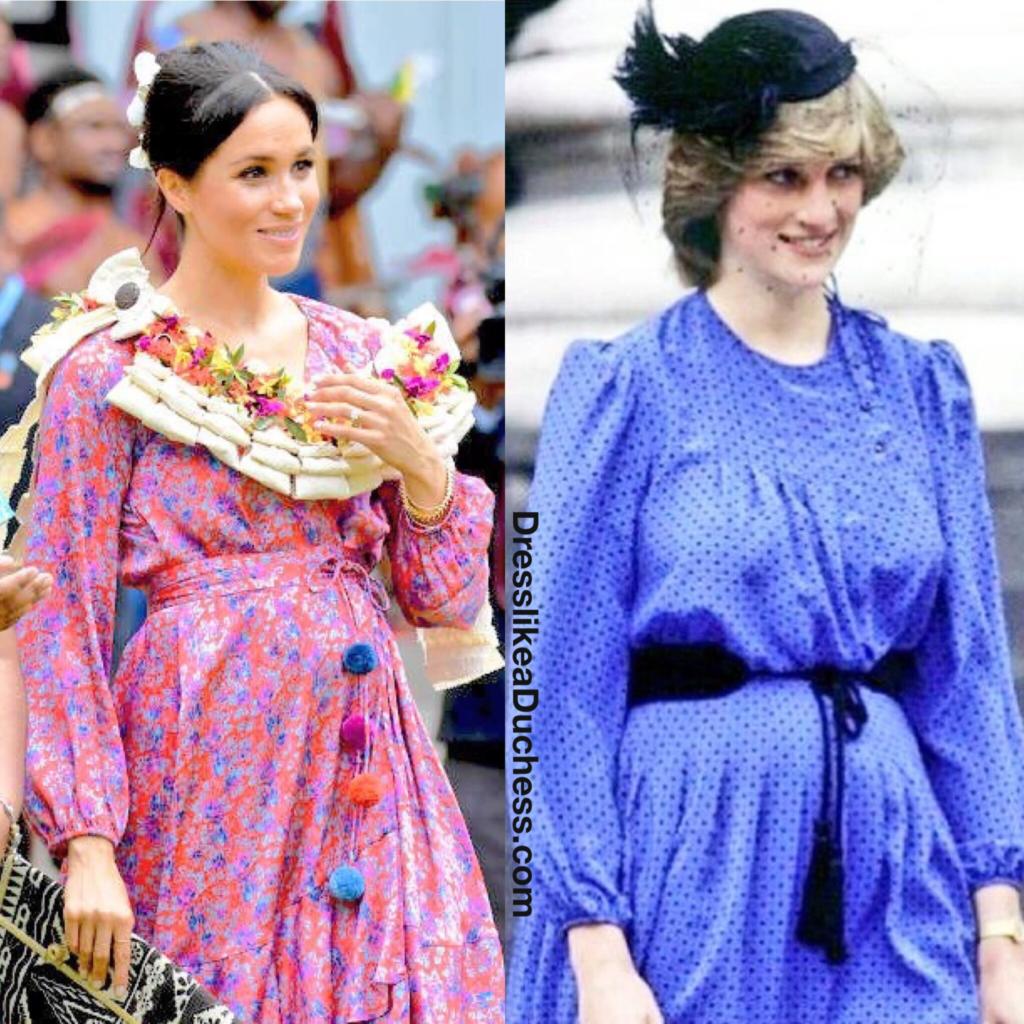 Many royal watchers were surprised when Meghan Markle opted for a very feminine and colorful Figue dress in Fiji. A major style departure from Meghan’s typical fashion fare of navy, gray and black, the silky dress even featured pom poms. Diana selected a very similar dress with polka dots (instead of florals) when she was pregnant with first son Prince William in 1982. Diana’s dress also had a unique belt with a tassel decoration very akin to Markle’s stylish waist accent. 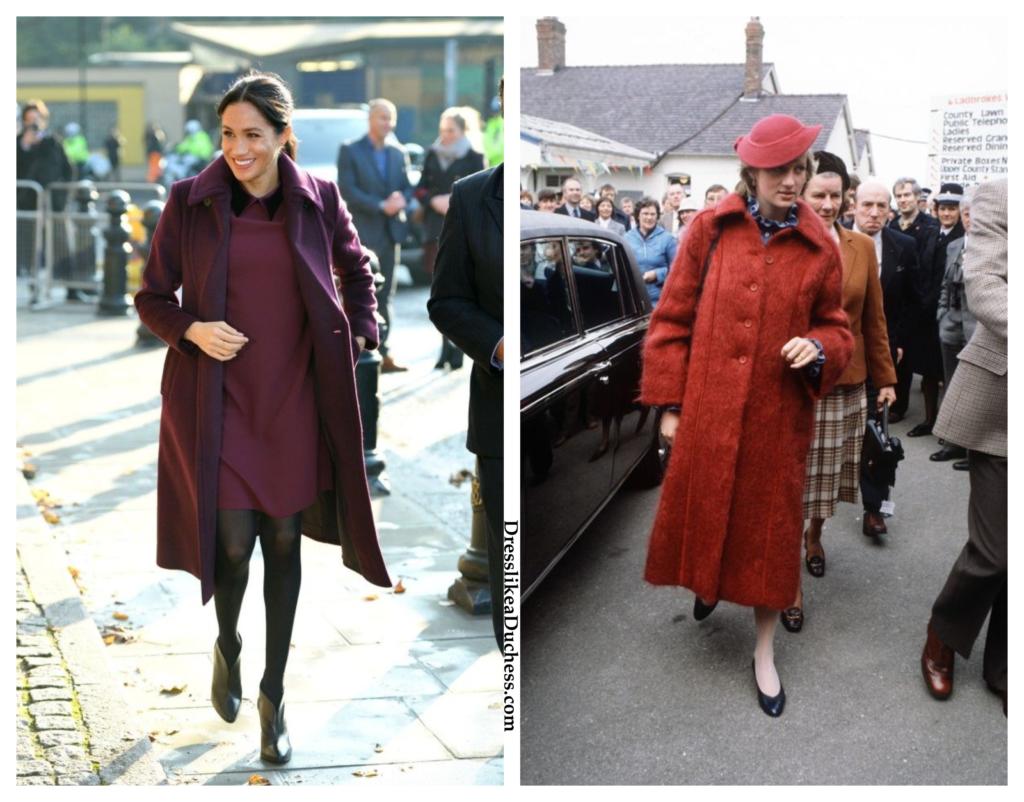 Both Meghan and Diana love a good winter coat in a berry hue. Diana wore this red wool number while pregnant during the cold season and Meghan opted for a similar wool coat in burgundy on a recent visit to the Hubb Community Kitchen. 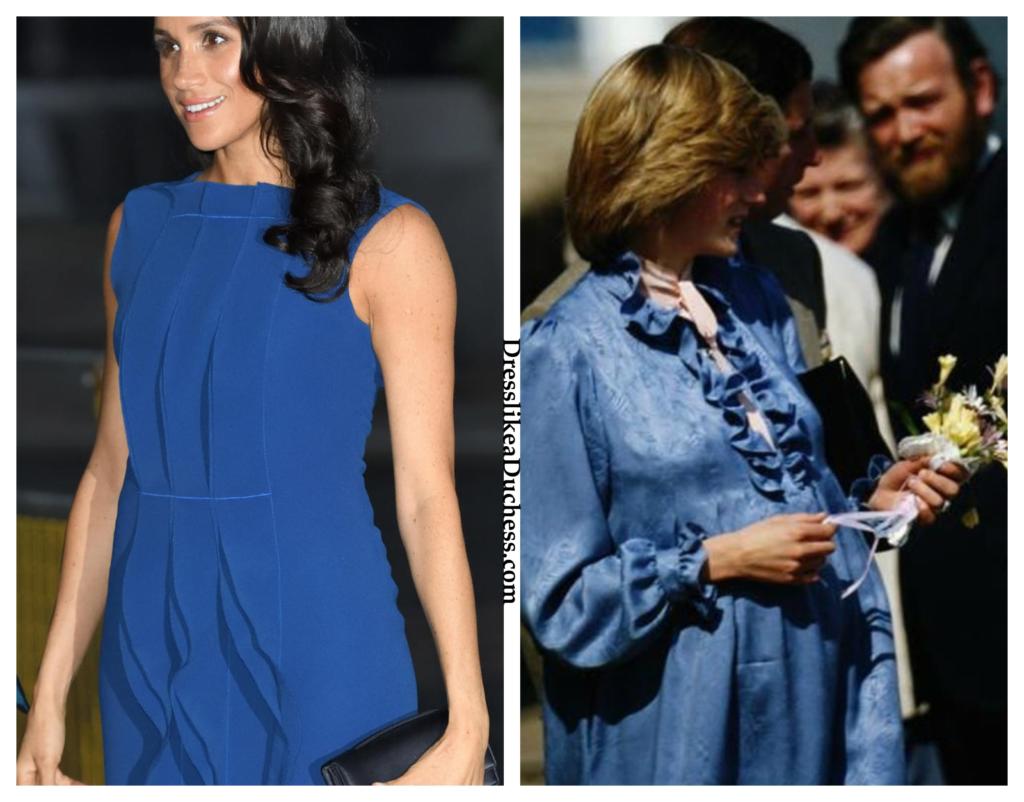 Meghan’s ruffled royal blue Jason Wu dress caused quite the stir. Pre-pregnancy announcement this style statement seemed to drop a baby bombshell without saying a word. Lady Diana opted for a similar blue ruffled dress during one of her pregnancies. 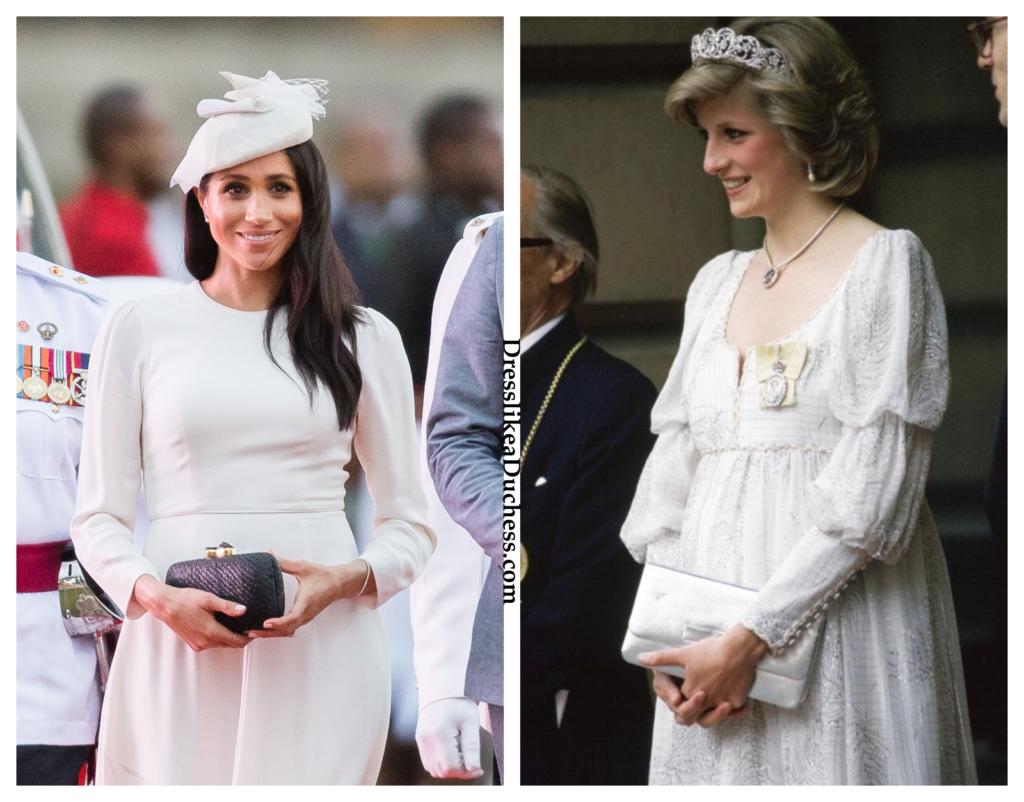 Princess Diana selected a glittery white ensemble during her pregnancy. Duchess Meghan opted for a similar all white Zimmermann dress on the royal tour with Prince Harry. The angelic color highlighted the fact that both women had a serious motherhood glow in the early days of their pregnancies. 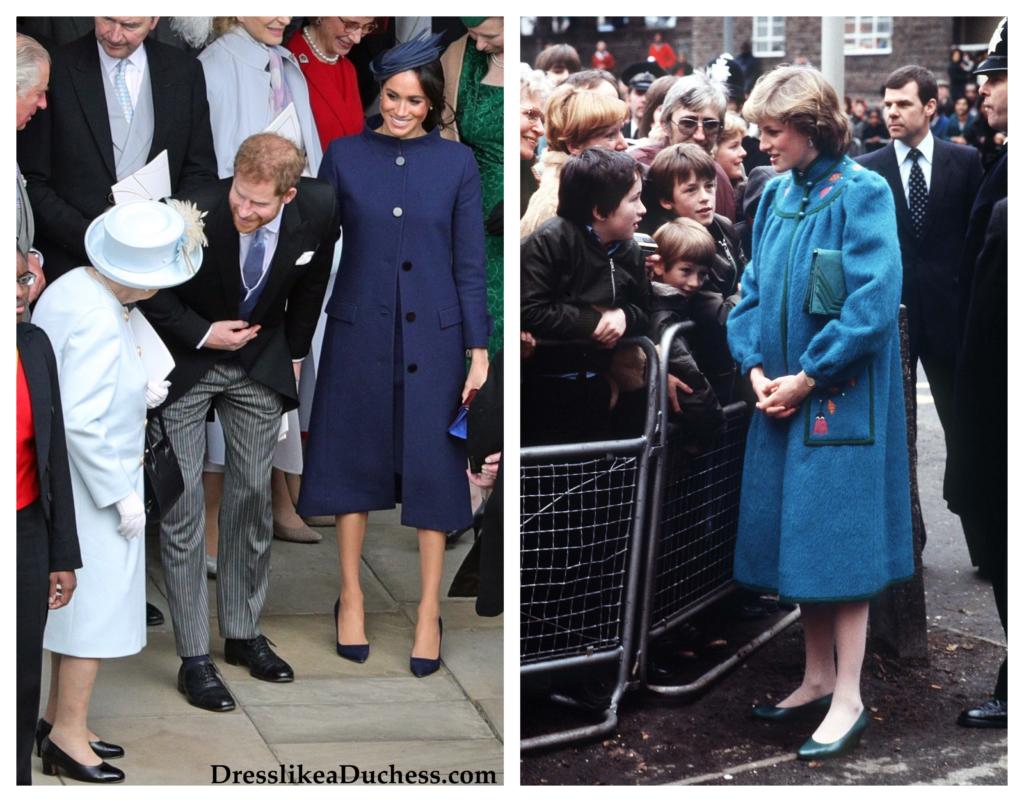 In 1982, Diana opted for a long blue button coat, the Duchess of Sussex repeated the trend with a midi length navy Givenchy number for Princess Eugenie’s nuptials at Windsor Castle. 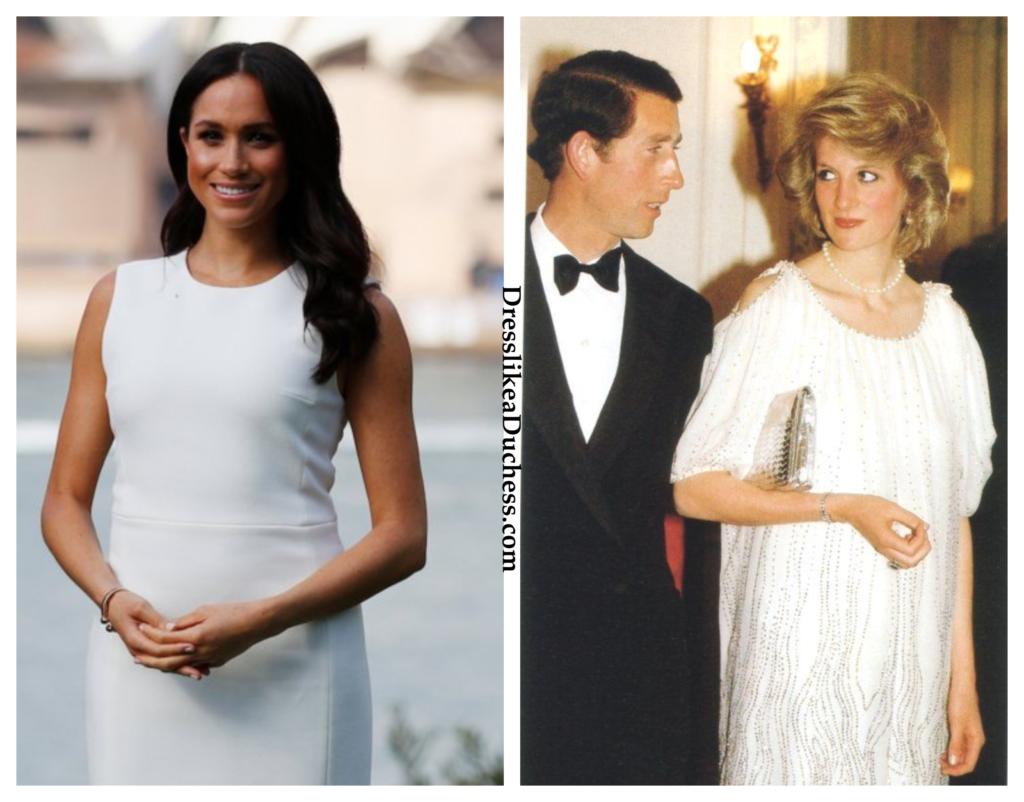 The Duchess of Sussex was wearing Princess Diana’s jewelry on her first day in Sydney and she also opted for a dress called ‘Blessed’ by Karen Gee during day one of the royal tour. The first day of the two-week trip down under was also the day Harry and Meghan announced they were expecting. No doubt Meghan was paying tribute to her late mother-in-law as well as trying to symbolically include her in the celebration of their baby joy. Diana opted for a similar all-white dress while she was expecting a baby with Prince Charles. 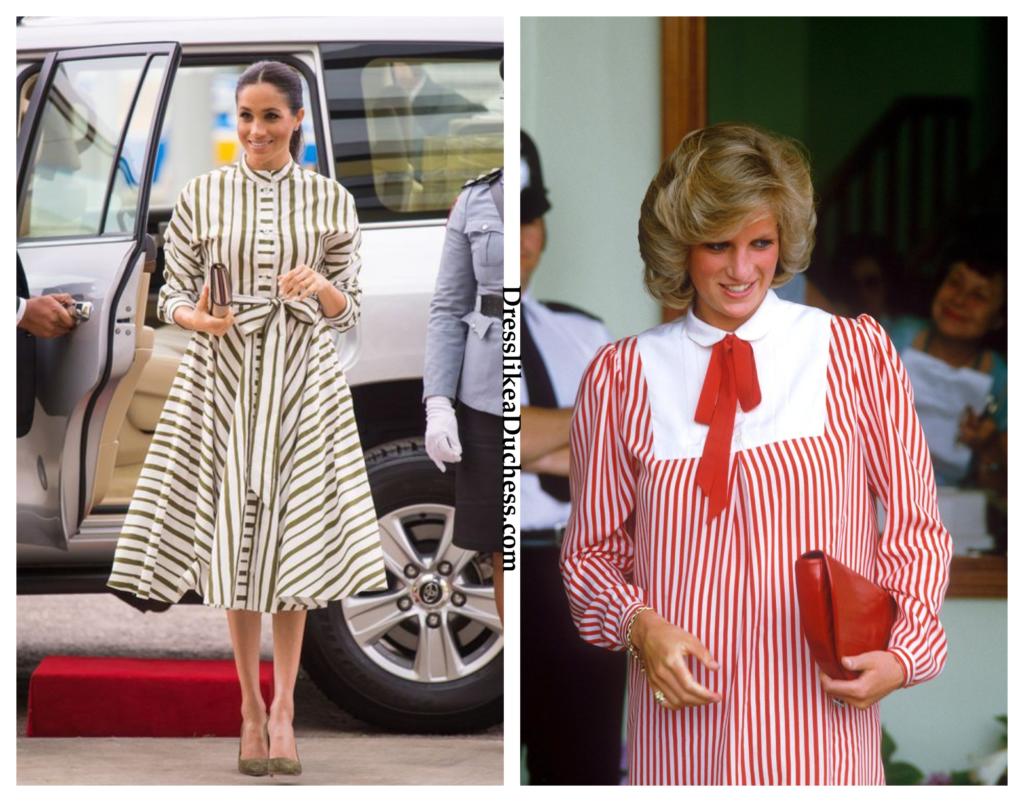 Meghan Markle wore a striped green and white Martin Grant shirtdress to meet the Prime Minister of Tonga. Princess Diana opted for a similar long sleeve dress during her pregnancy during the 1980s but selected red and white stripes. 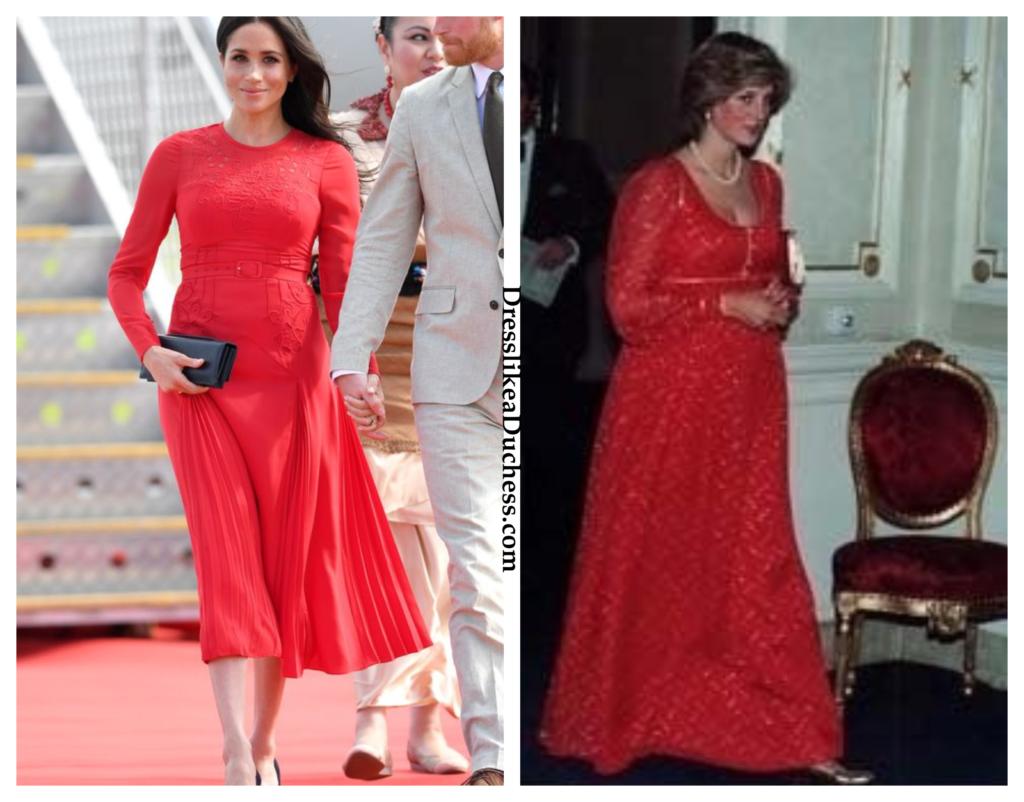 Meghan Markle and the late lady Diana both look equally stunning in red dresses. Meghan and Diana’s ensembles were both cinched at the waist and featured an intricate lace like detail.