The Duke and Duchess of Sussex and the Duke and Duchess of Cambridge took part in a weekend devoted to Remembrance events honoring and commemorating fallen soldiers and veterans from World War One. Thousands of people across the globe gathered in capitals, beside monuments and in front of their leaders to mark the 100th anniversary of the end of the First World War. The Armistice commemorations began on Saturday evening for the Festival of Remembrance Service at Royal Albert Hall.

The evening marked the first occasion Prince Harry and Meghan Markle made an appearance since returning from their whirlwind 16-day Oceania tour. While Kate Middleton has participated in remembrance events since 2011, this weekend is the first time Meghan has taken part in the special services. 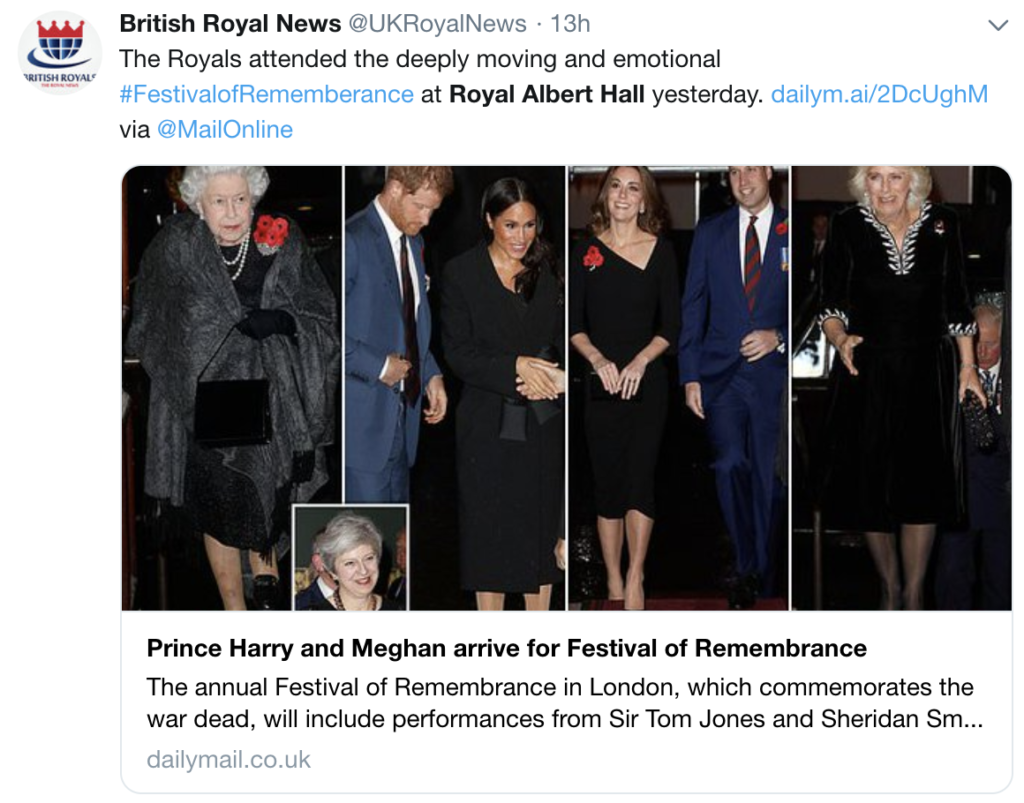 For this occasion, the Duchess of Sussex recycled a Stella McCartney coat she had worn previously in Cardiff, Wales. 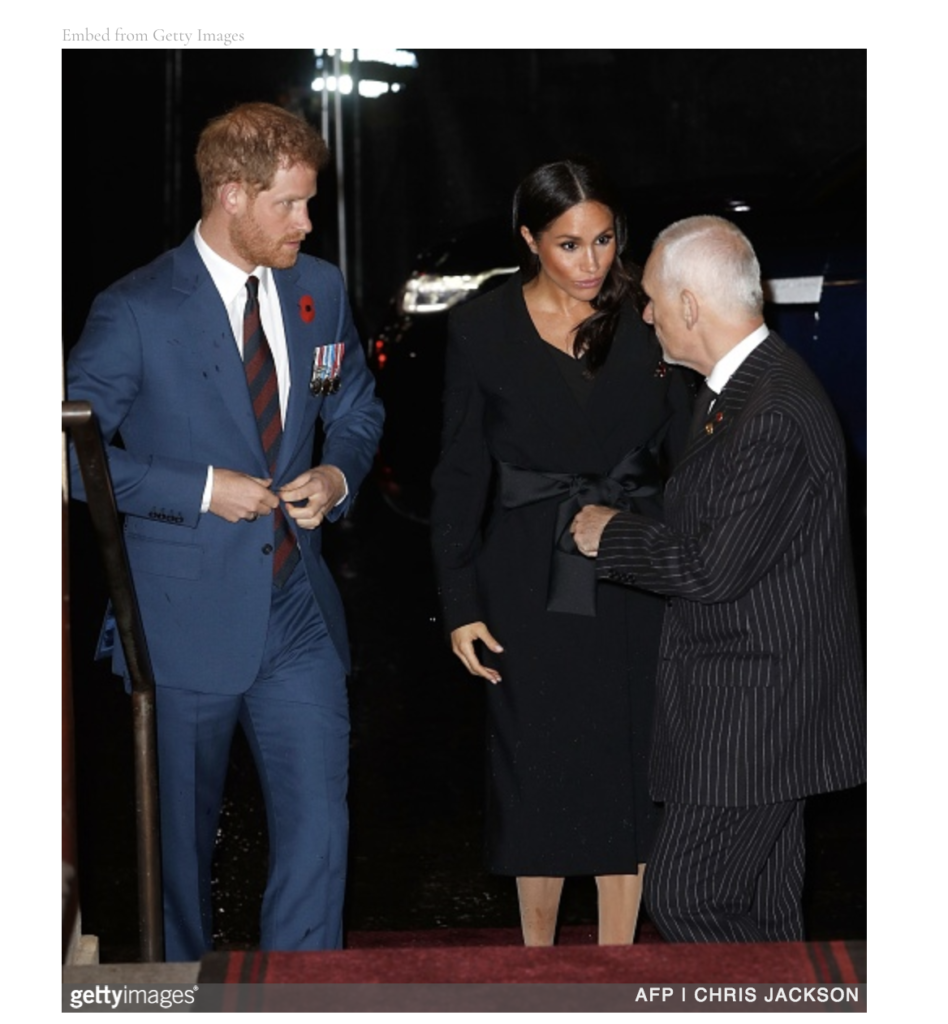 The tie-detail black coat features a wool blend design with peak lapels and an exaggerated self-tie front. She paired the coat with a Shaggy deer crossbody bag from the British label which is still available for purchase. 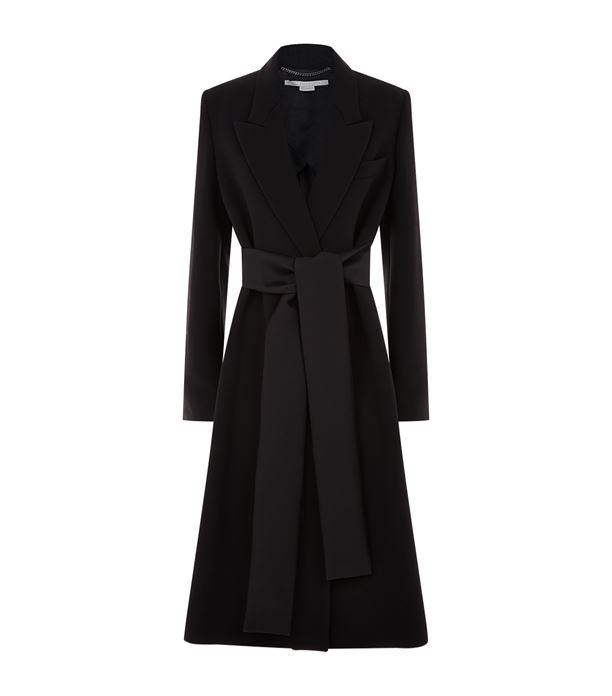 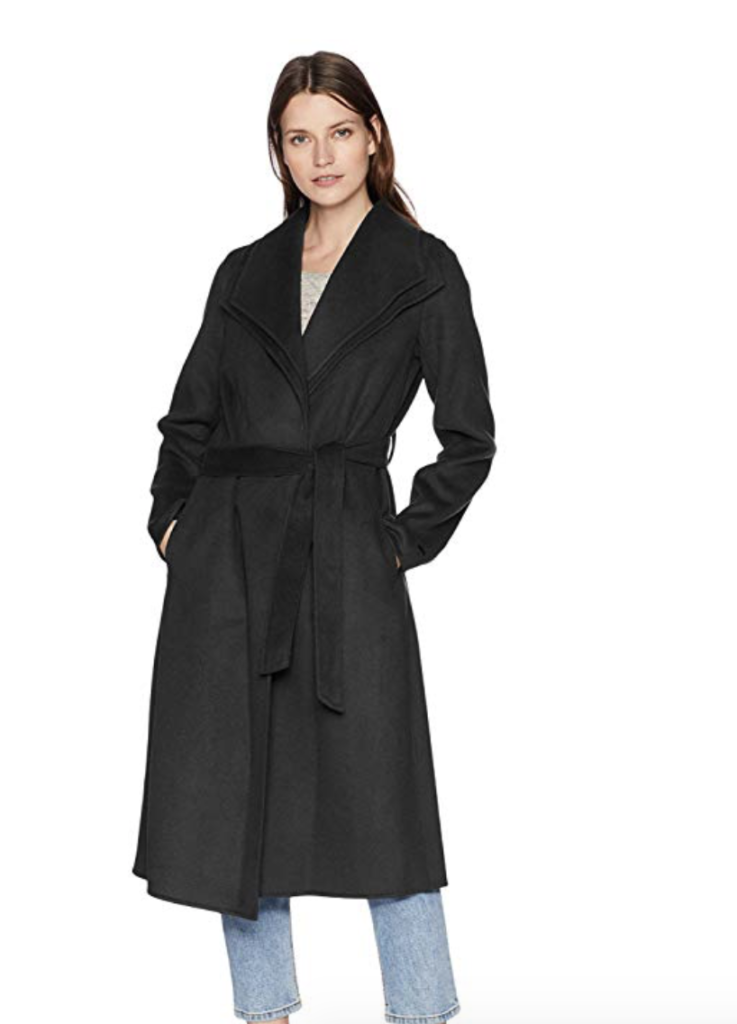 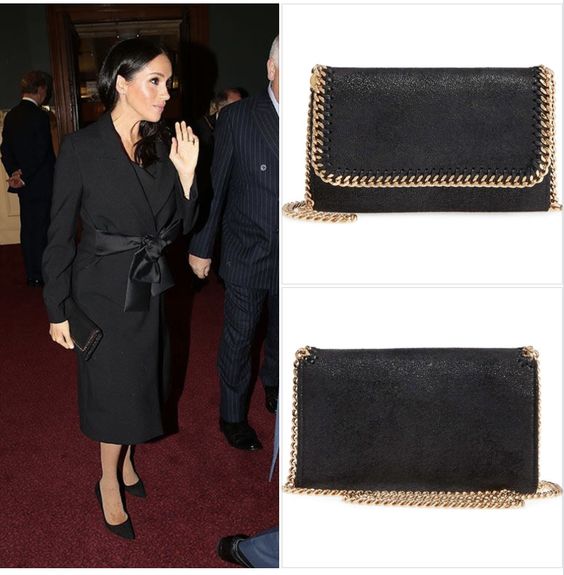 Harry and Meghan were seen inside the theater.

While there were few images of the Duchess of Sussex without her black wrap coat, one image revealed her dress to be a structured black likely midi-length style with a v-neckline and short sleeves now confirmed to be a dress by Marks and Spencer. 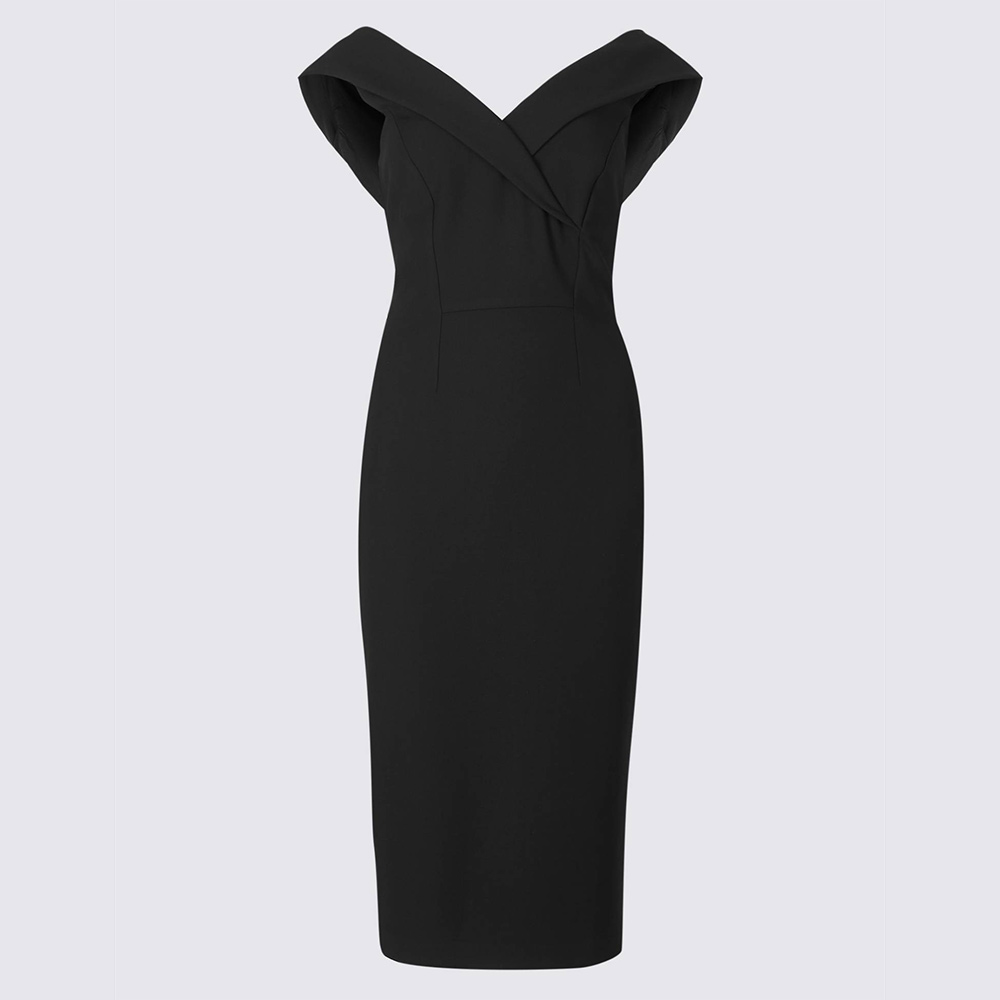 Meghan opted for a very affordable midi dress for this occasion. 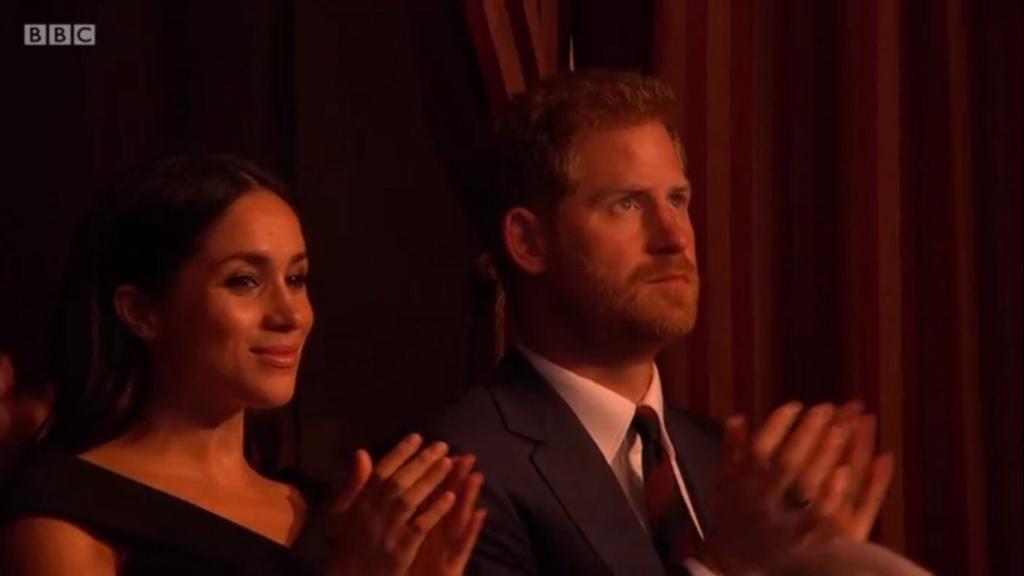 Meghan attached a poppy brooch to her M&S black dress. 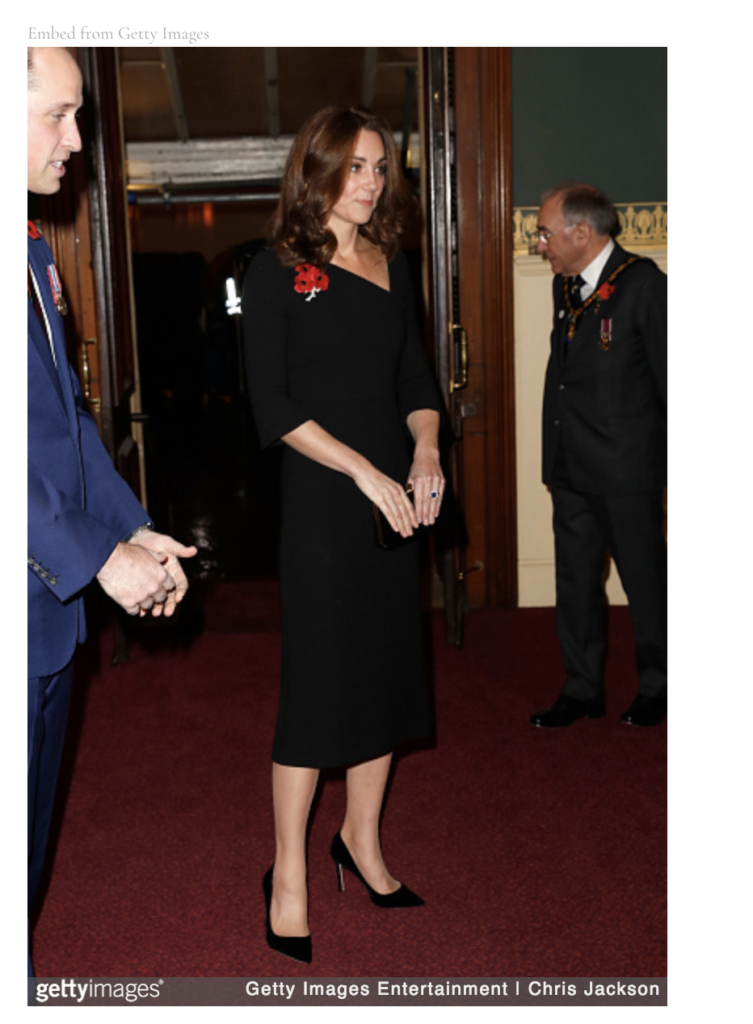 Or find a similar style on Amazon 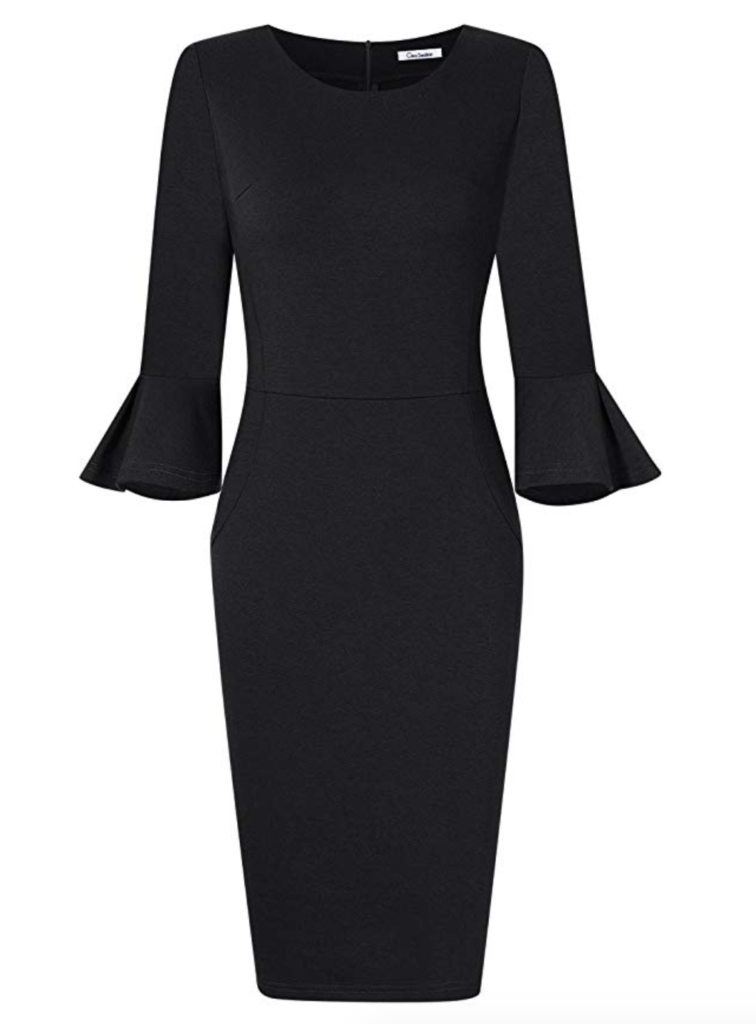 Kate accessorized the look with new pieces by Jimmy Choo. She carried the Celeste clutch in black velvet. The bag is made to order in velvet but can be found in suede HERE. Kate owns the bag in ballet pink, navy suede and a bordeaux suede. 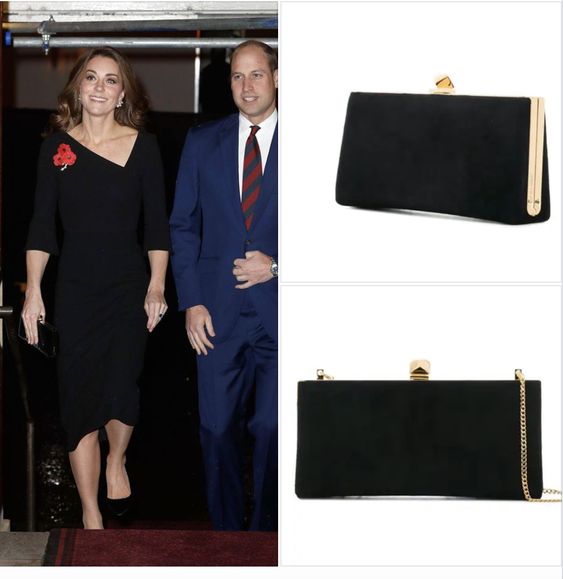 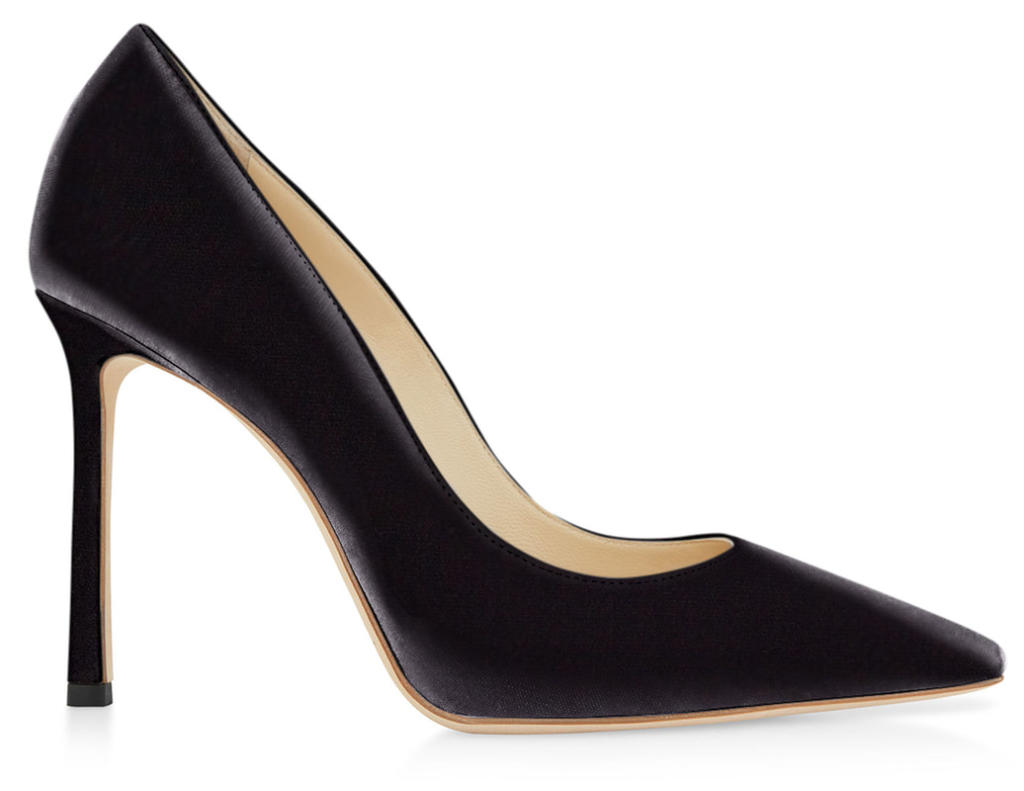 For the following morning, the duchesses paid their respect at the Cenotaph where they were once again joined by senior royals and the Queen. Kate wore her women of the First World War brooch and a bouquet of poppies on her lapel (Princess Diana also used to wear multiple poppies and pearl earrings for Remembrance events).

For this occasion, the Duchess of Cambridge opted for an Alexander McQueen coat which could be a a custom creation based on the Military Lace Insert Jacket by McQueen as suggested by Perths Fashion. The jacket features a virgin wool composition along with a cropped silhouette and forms a tailored fit with metallic button fastenings. 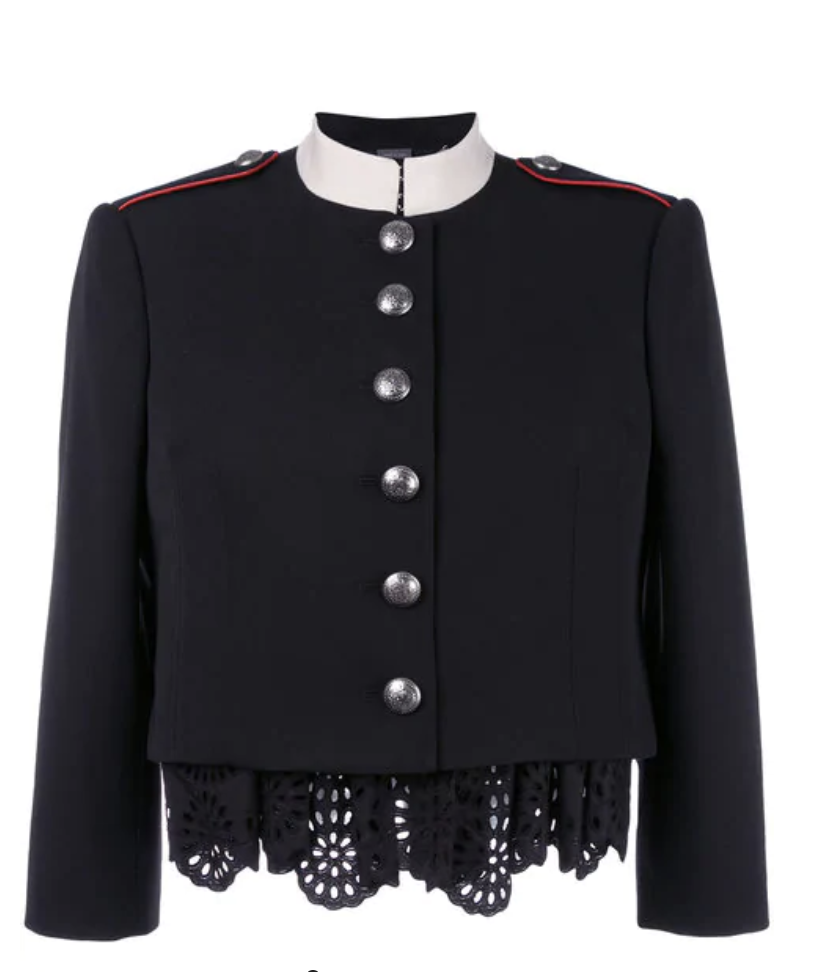 It was suggested on social media that Kate’s jacket may have been inspired by WW1 nursing uniforms (as seen here: pictures of a WW1 Canadian Army Medical Corps Matron (left) with a Service Dress and Nursing Sister).

A similar style jacket can be found on Amazon HERE 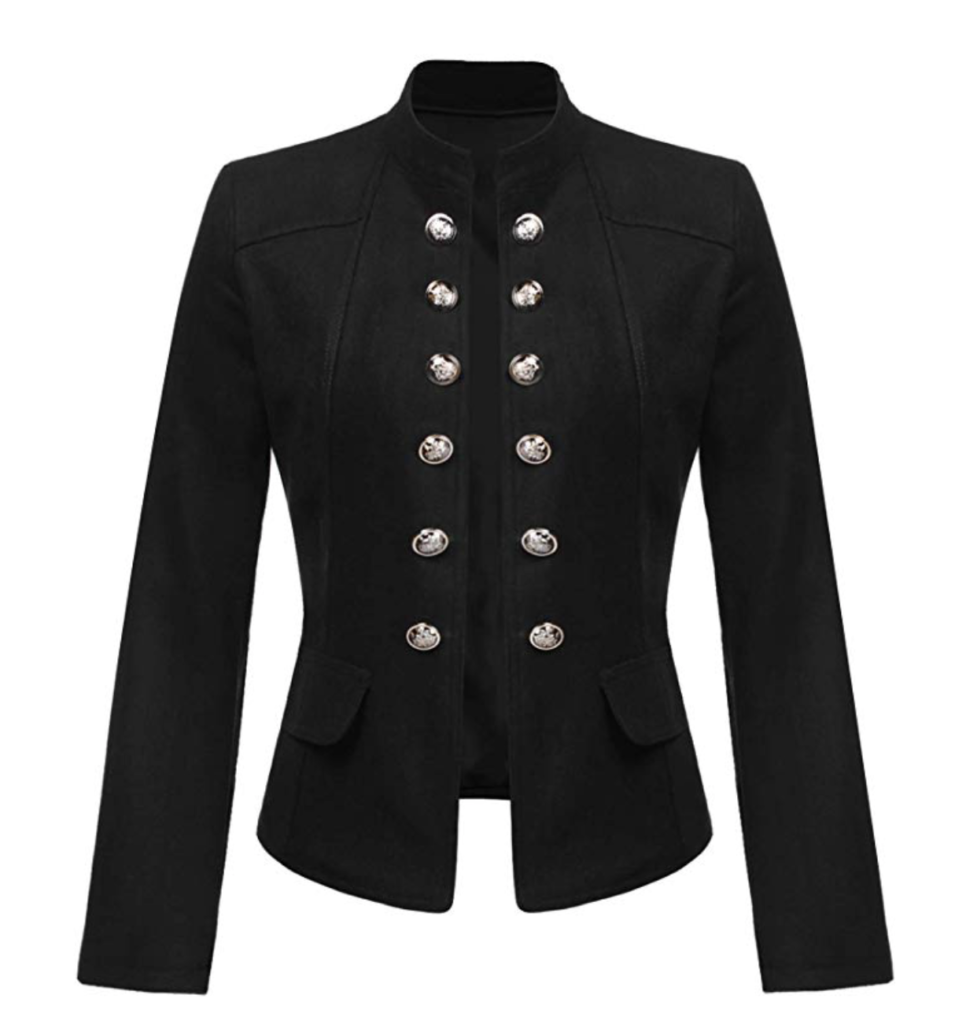 The Duchess of Cambridge added a Lock and Co Abney black fascinator hat (Kate’s is likely a custom version). 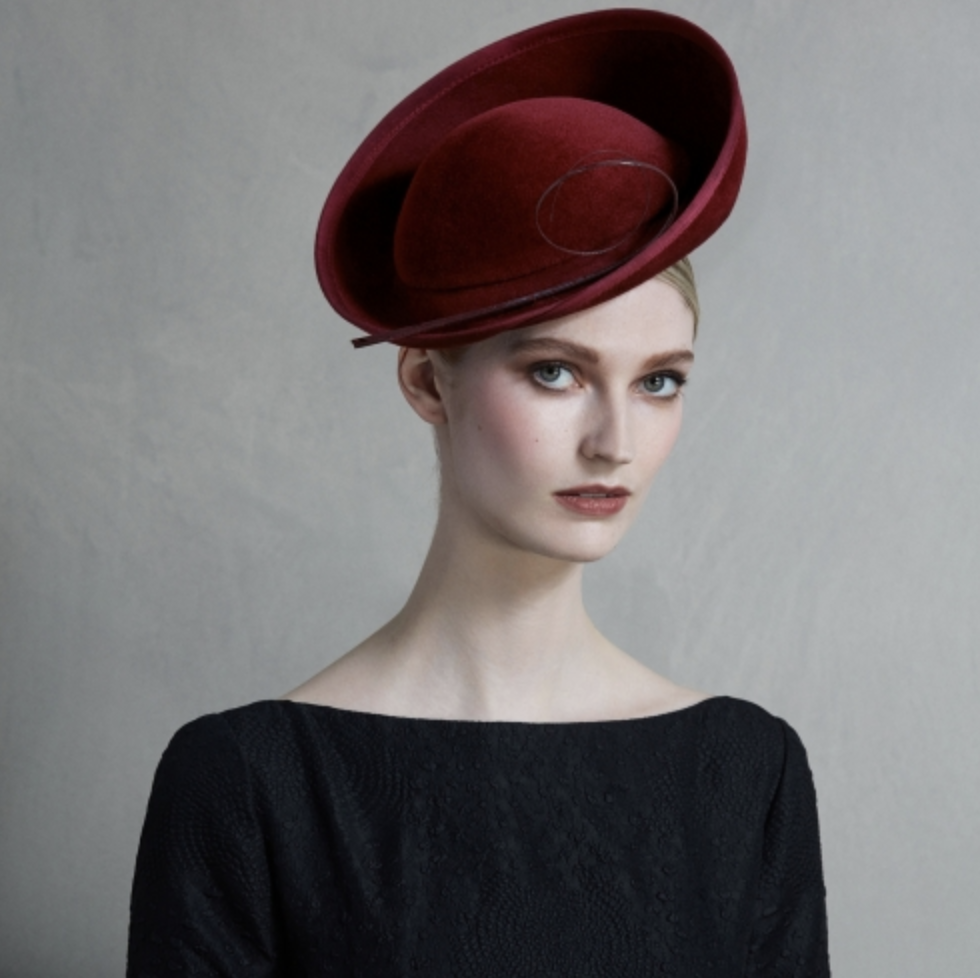 The Duchess of Cambridge completed the look with pearl cluster Cassandra Goad earrings that she wore to Prince Louis’ Christening. 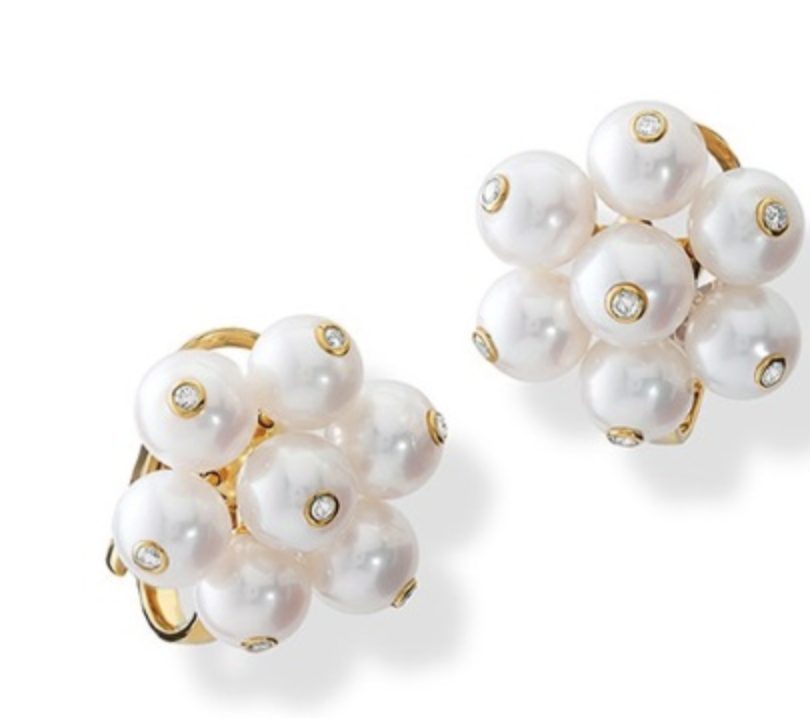 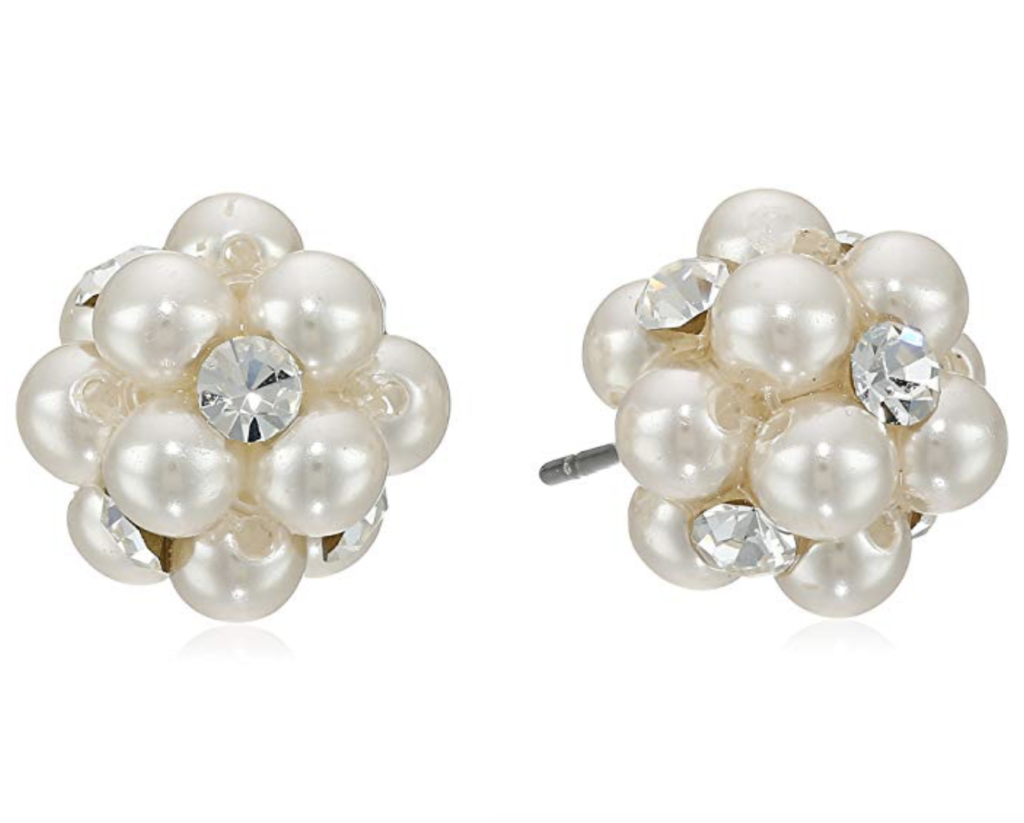 The Duchess of Sussex selected a bespoke Givenchy jacket for the National Service of Remembrance at the Cenotaph War Memorial. 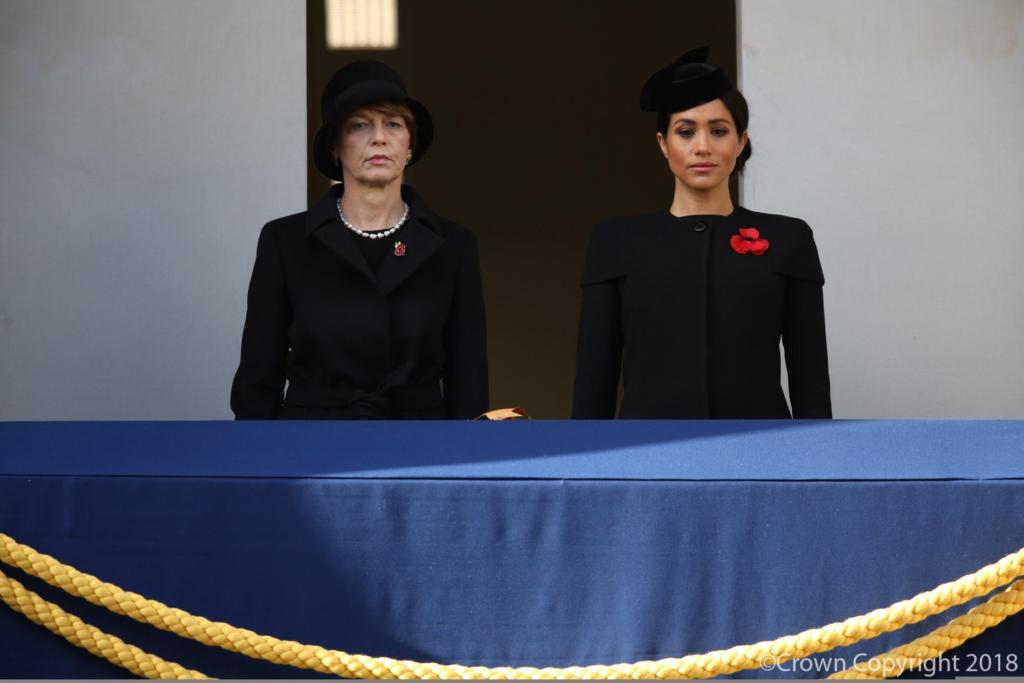 Both duchesses were pictured on the balcony overlooking the Armistice Day Parade and wreath laying ceremonies where Prince William and Prince Harry honored fallen soldiers.

For their evening of remembrance at Westminster Abbey, both royal women selected button-front ensembles. Duchess Kate wore a recycled Catherine Walker dress coat in emerald green while Duchess Meghan opted for a blue peplum top with matching skirt and belt.

As noted here, the look is very similar to her pale powder pink Prada ensemble that Meghan Markle wore for the Queen’s Young Leaders Awards. 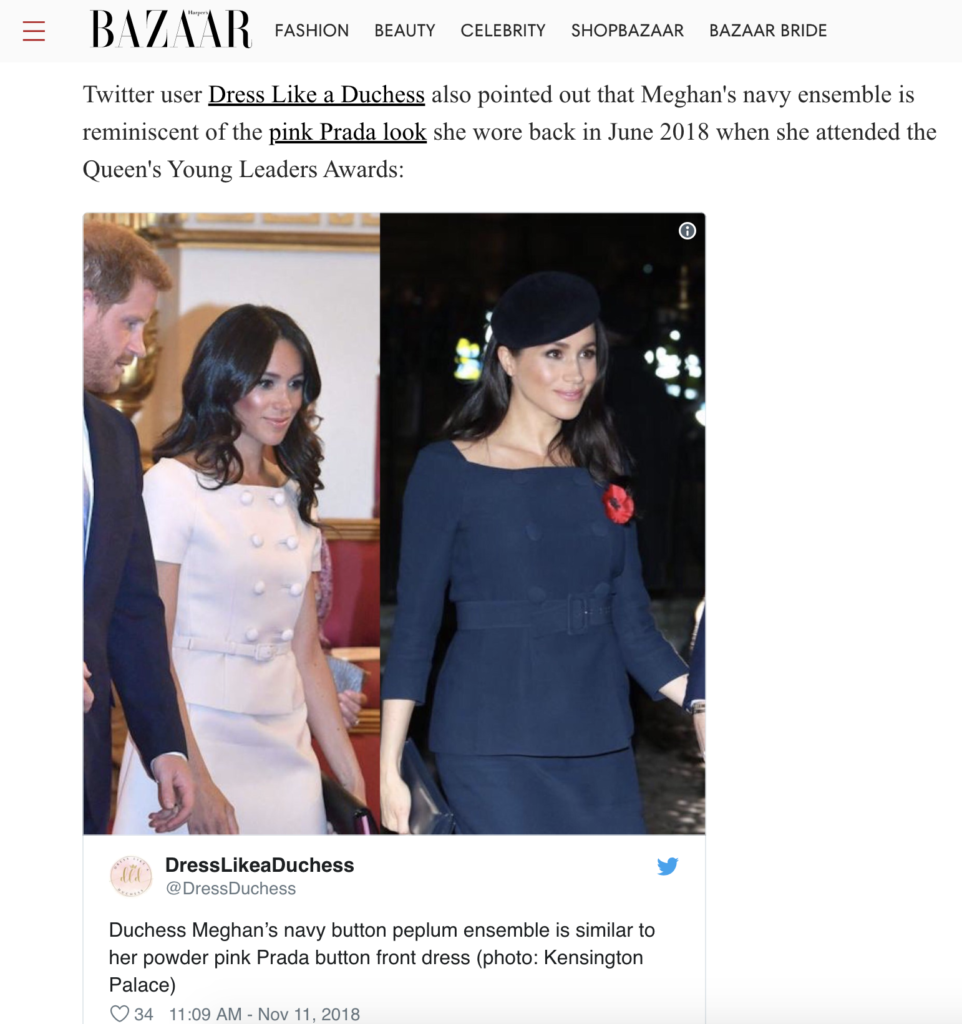 Another look at Meghan’s blue belted dress with matching navy buttons. The Duchess of Sussex added a black beret which is believed to be by Stephen Jones and similar to the white hat she wore for the Commonwealth Day Service. Meghan appears to have opted for cream or nude pantyhose as well as her Aquazzura ‘Deneuve’ Bow Pump in custom navy suede. She also carried a new unidentified leather front flap navy clutch.

The Westminster Abbey services were televised by the BBC. 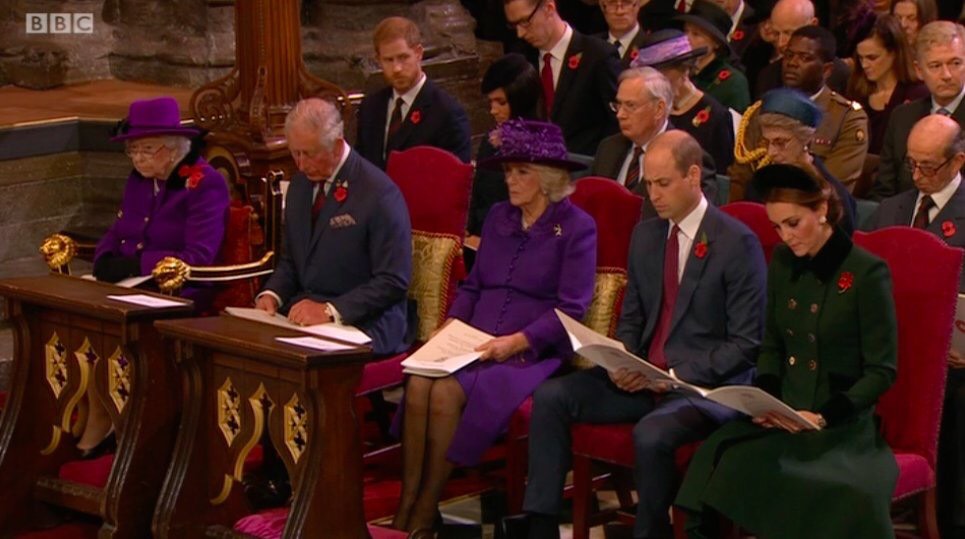 Kensington Palace also shared pictures of the ‘Fab Four’ (as they have been dubbed by the media) preparing to depart the Abbey for the evening. 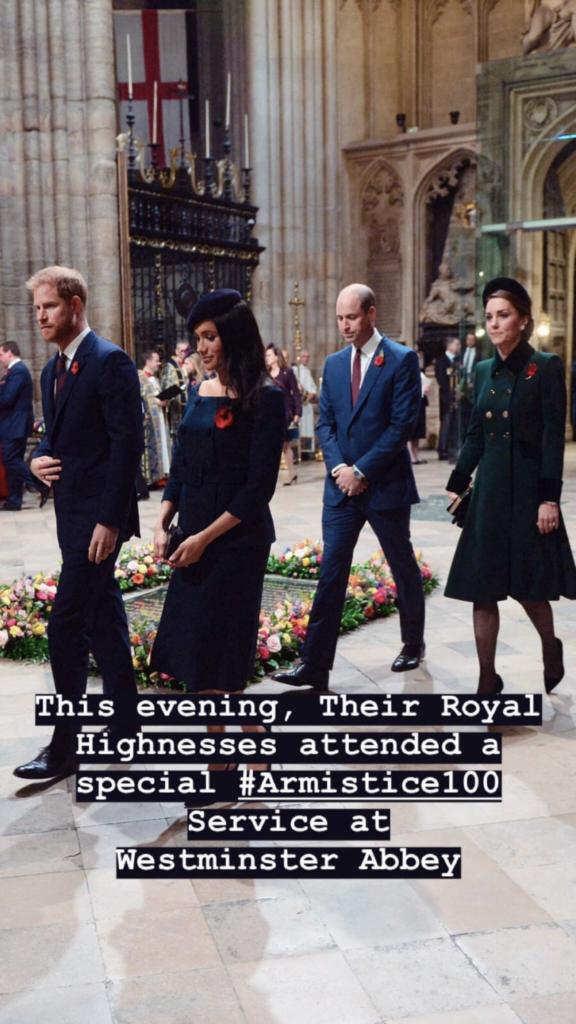 The foursome also posed for a picture inside the Abbey after the service. 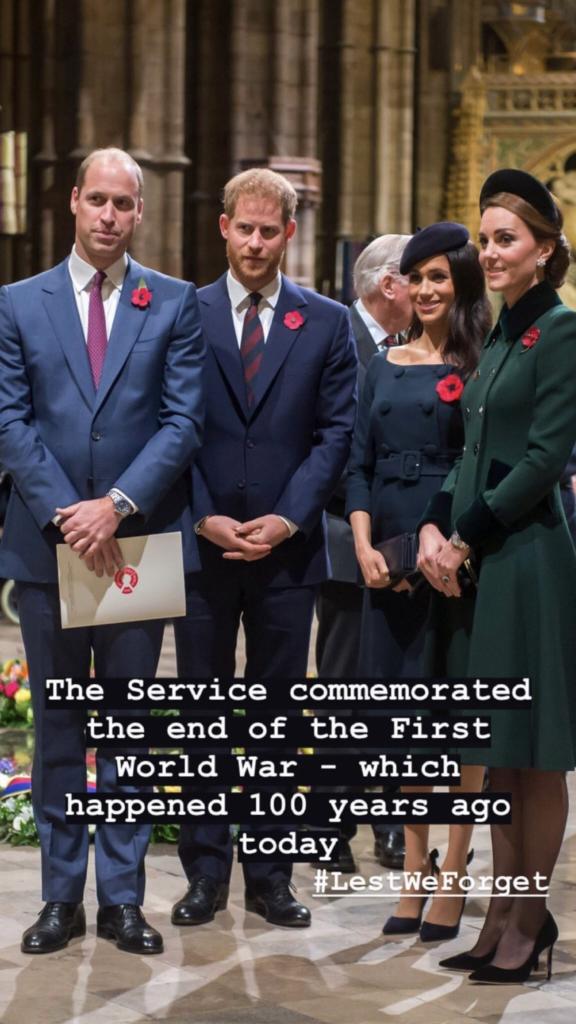