The Duchess of Sussex is expecting her first child with Prince Harry in April while the Duchess of Cambridge is an old pro at the motherhood game. In fact, Kate and Wills have thrice experienced the joy of becoming a parent. So, we thought it might be fun to take a look back at Kate and Meghan’s pregnancies and their evolving baby bumps with their first children.

Meghan and Kate both opted for navy numbers to cover the tiniest hint of a baby bump during their first stages of pregnancy. Duchess Kate was seen in a checkered coat in December 2012 after having been released from the hospital for Hyperemesis Gravidarum before the three month mark while Meghan was seen just before the royal tour and the announcement that her and Harry had their 12-week ultrasound scan. 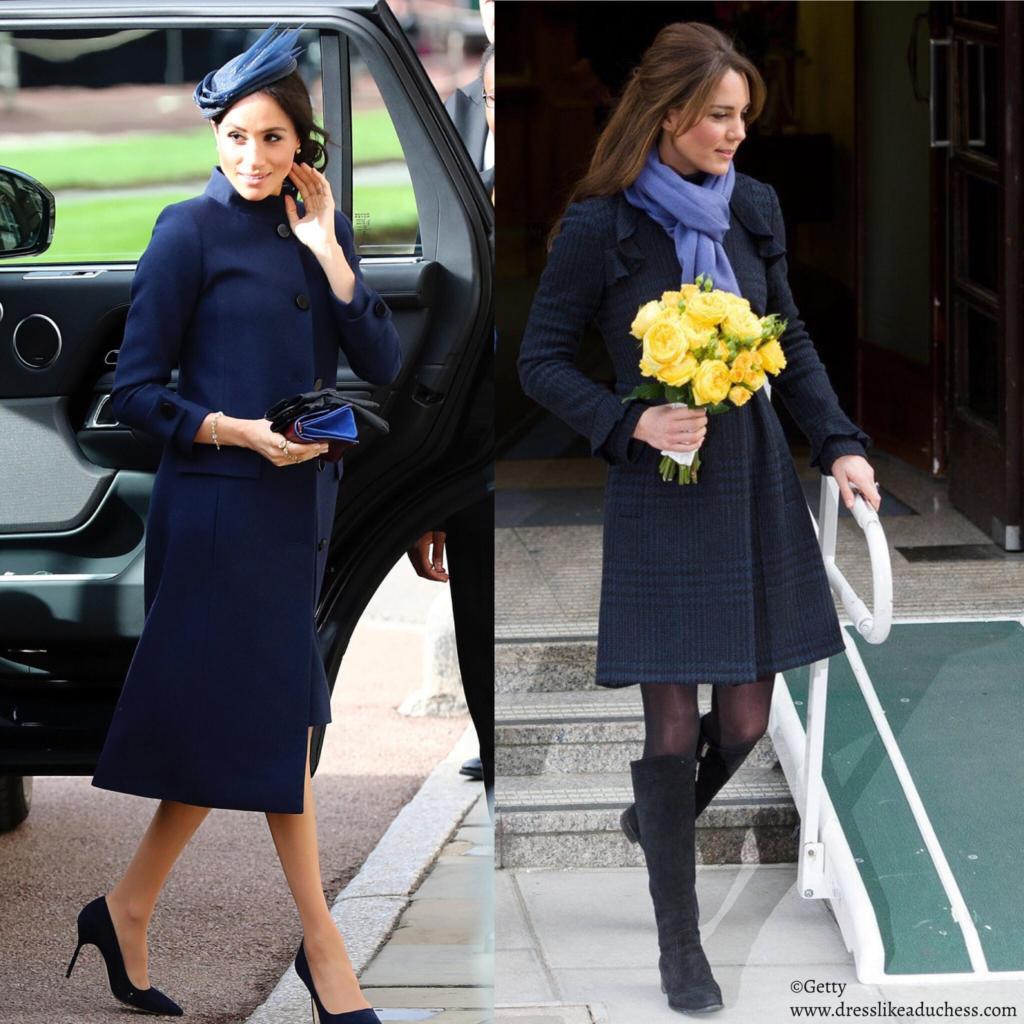 Kate seemed to be feeling better in February 2013 as she showed off the smallest hint of a blossoming baby bump in a Max Mara wrap dress. Meghan opted for a similar wrap style Dion midi dress on the royal tour as she showed off her three month bump. 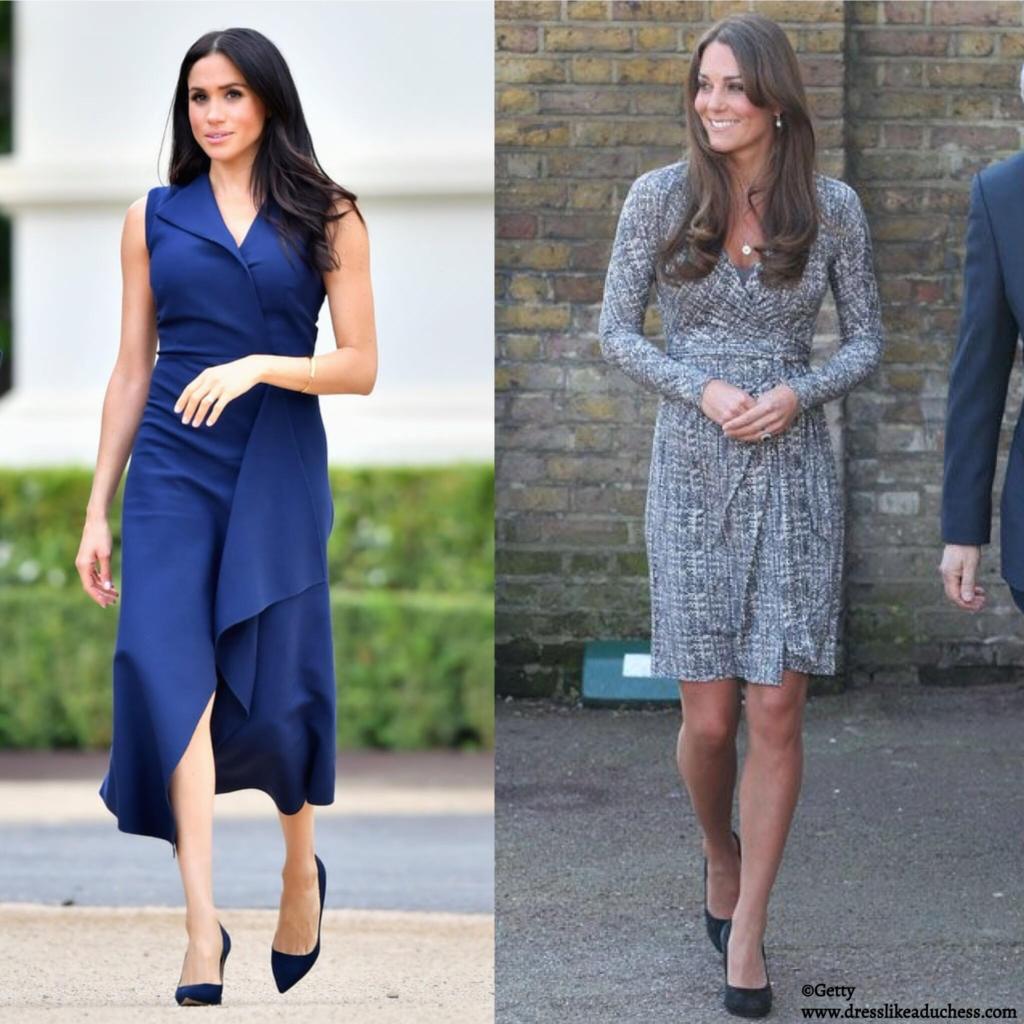 In March 2013, Kate looked to be in high spirits and feeling healthy and happy as she showed off the tiniest Cambridge in a Hobbs Celeste belted jacket. The Duchess of Sussex looked casual cool on the royal tour in a striped reformation dress and Grear lace-up gladiator sandals by Sarah Flint. 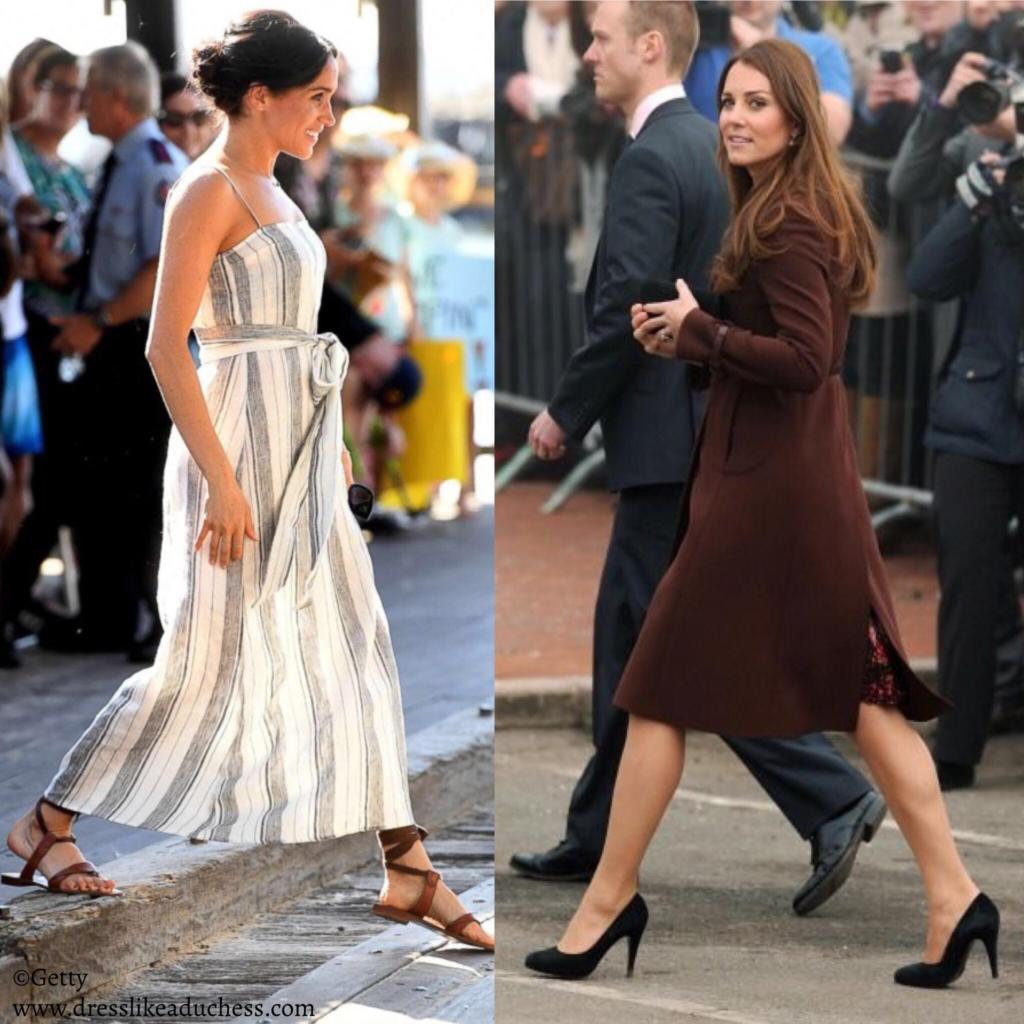 In March 2013, Duchess Kate looked every inch the mama to be in an emerald Emilia Wickstead coat while Duchess Kate showed off her fashionista skills with a Stella McCartney navy dress in New Zealand. 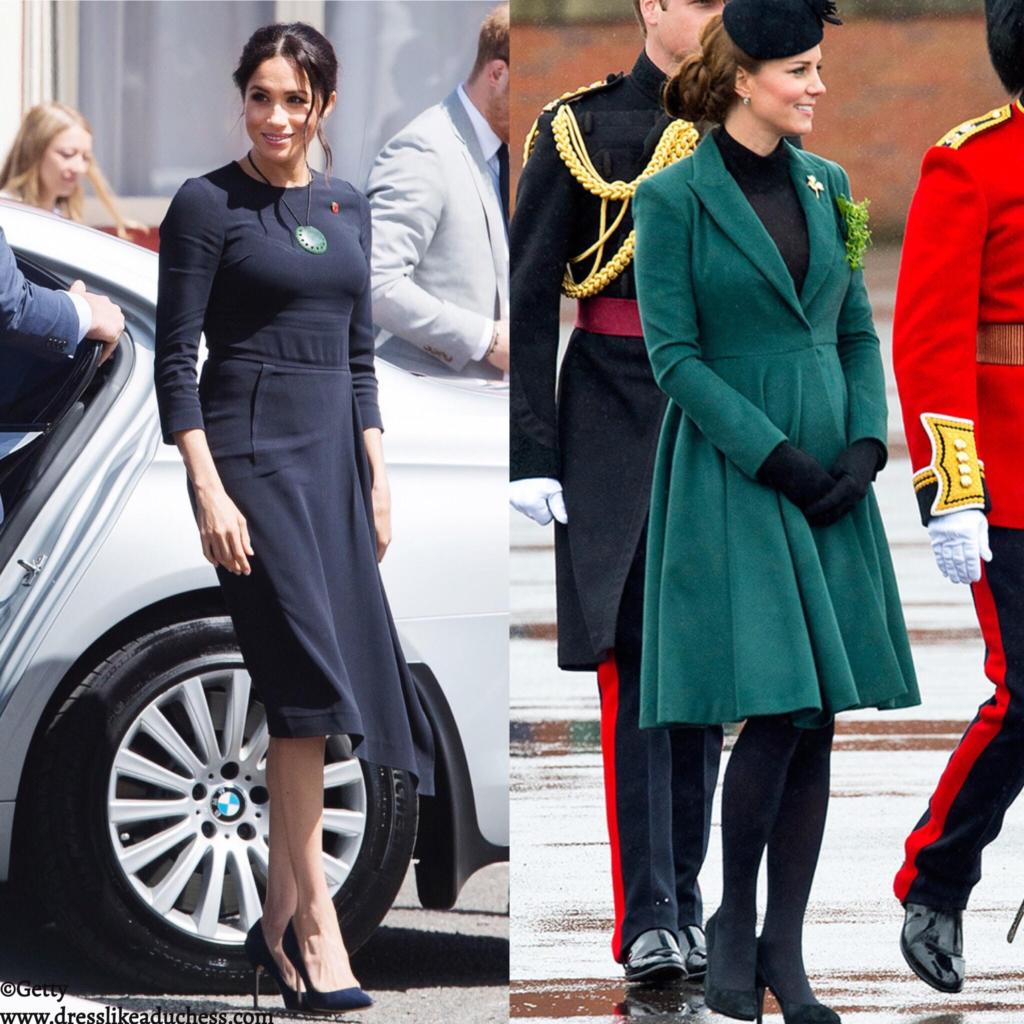 In March 2013, Duchess Kate was approximately half way through her pregnancy with Prince George when she wore an aquamarine By Marlene Birger coat accented with black details and statement buttons. She finished the look off with a bow-topped black beret. Meghan made a festive appearance at the Hubb Community Kitchen in a burgundy Club Monaco shift dress and Givenchy cut-out booties in late November 2018 (with about five months to go in her pregnancy). 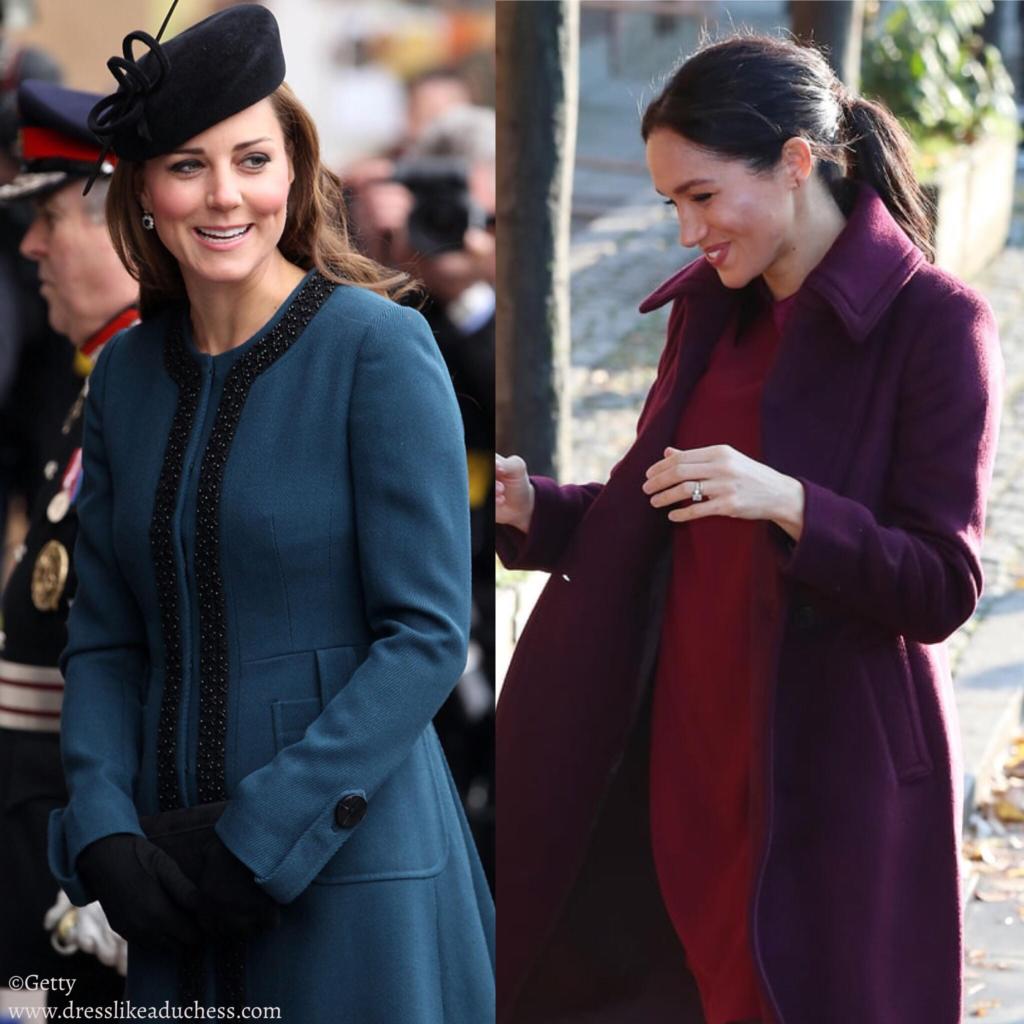 In April 2013, the Duchess of Cambridge was all smiles as she prepared for a summer arrival from the stork. She visited the Willows Primary School in Manchester in a printed silk-crepe Erdem dress. Meghan looked a bit curvier in November 2018 in a bateau neckline skirt suit reportedly from Prada. 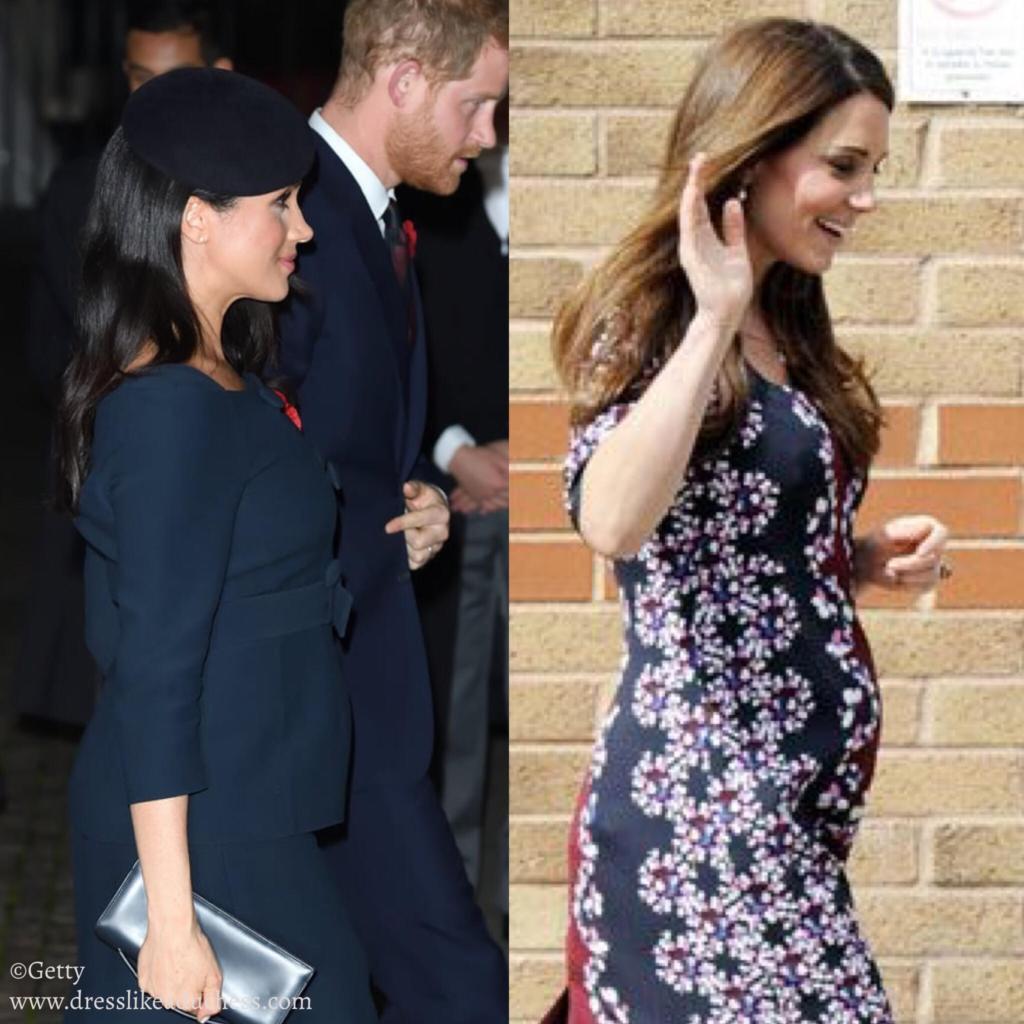 In  April 2013 and November 2018 respectively, Kate and Meghan both appeared to have a serious pregnancy glow. Meghan attended a royal variety performance in a sparkly Safiyaa sequin top and mermaid skirt while Kate attended an evening reception at the National Portrait Gallery in pale blue Emilia Wickstead dress. 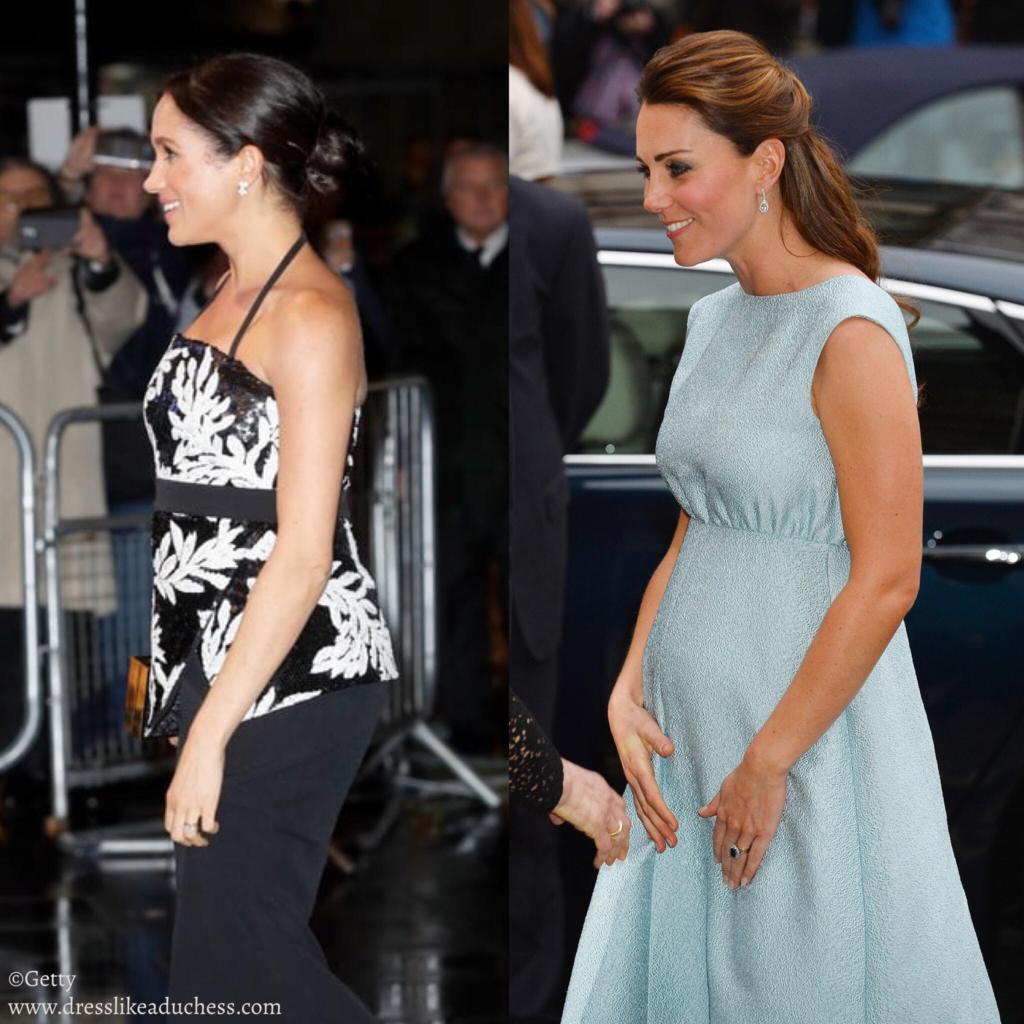 On April 29th, 2013, Kate stepped out in a peachy ensemble by Tara Jarmon and beige dress. The Duchess of Sussex opted for a similar cream-colored H&M bodycon dress for a visit to her patronage the Mayhew in January 2019. 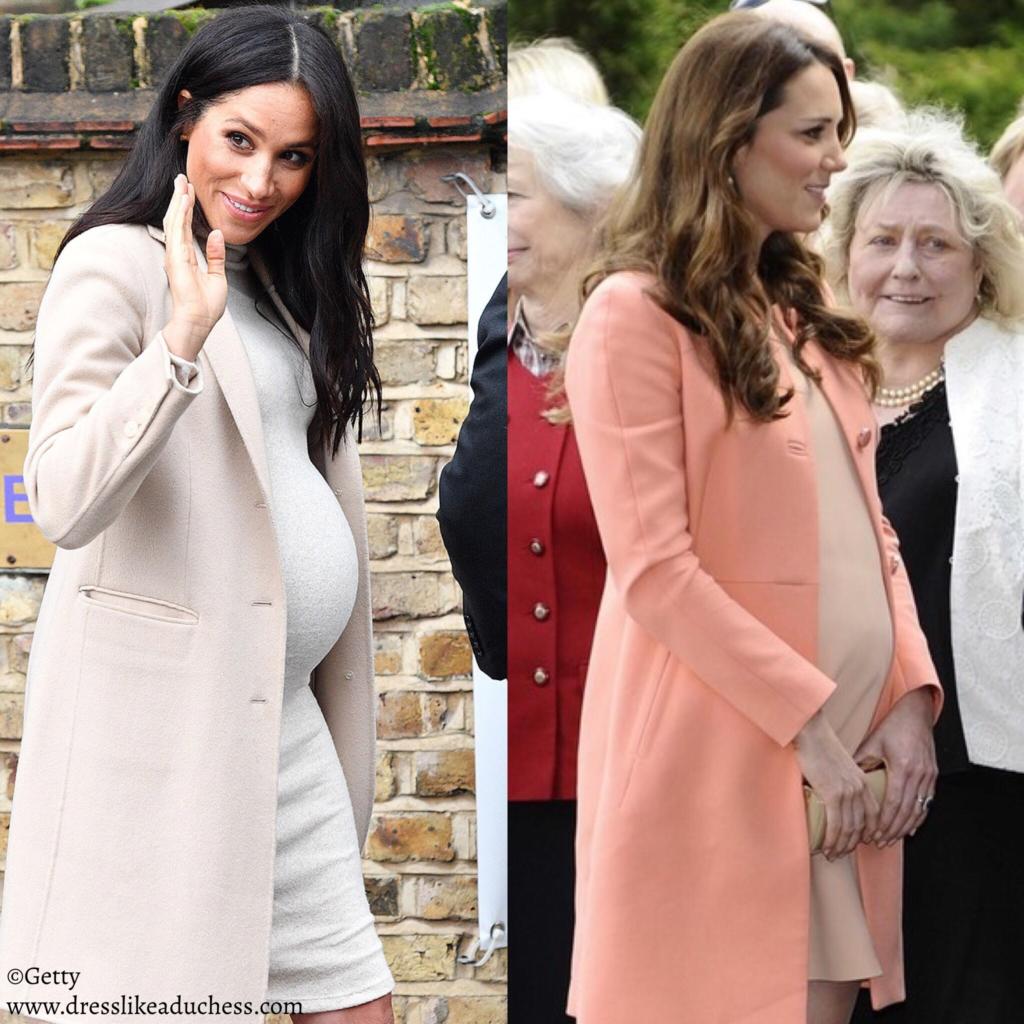 The Duchess of Sussex looked glam in a sequin Roland Mouret dress for a performance of Cirque du Soleil in January of this year. She told well-wishers at a previous royal engagement that she is 6 months along and due in late April. Duchess Kate celebrated her final two-month pregnancy countdown on May 22nd (she gave birth July 22, 2013) in a yellow Emilia Wickstead dress coat for a garden party. 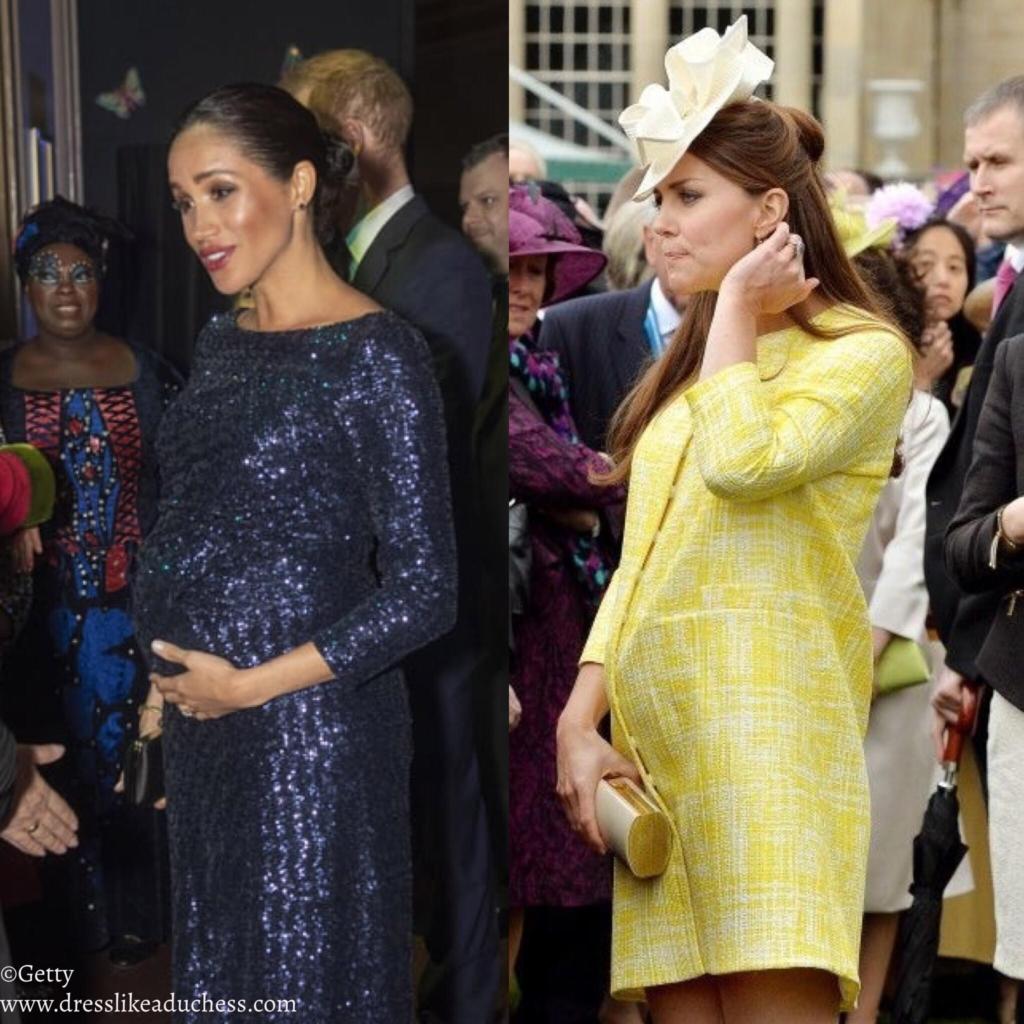 In early June, Kate Middleton made one of her final appearances out shopping in London before the birth of Prince George on July 22nd. Meghan went out for a lunch in Notting Hill in late January with just a couple months of pregnancy left before the birth of the Sussex babe. 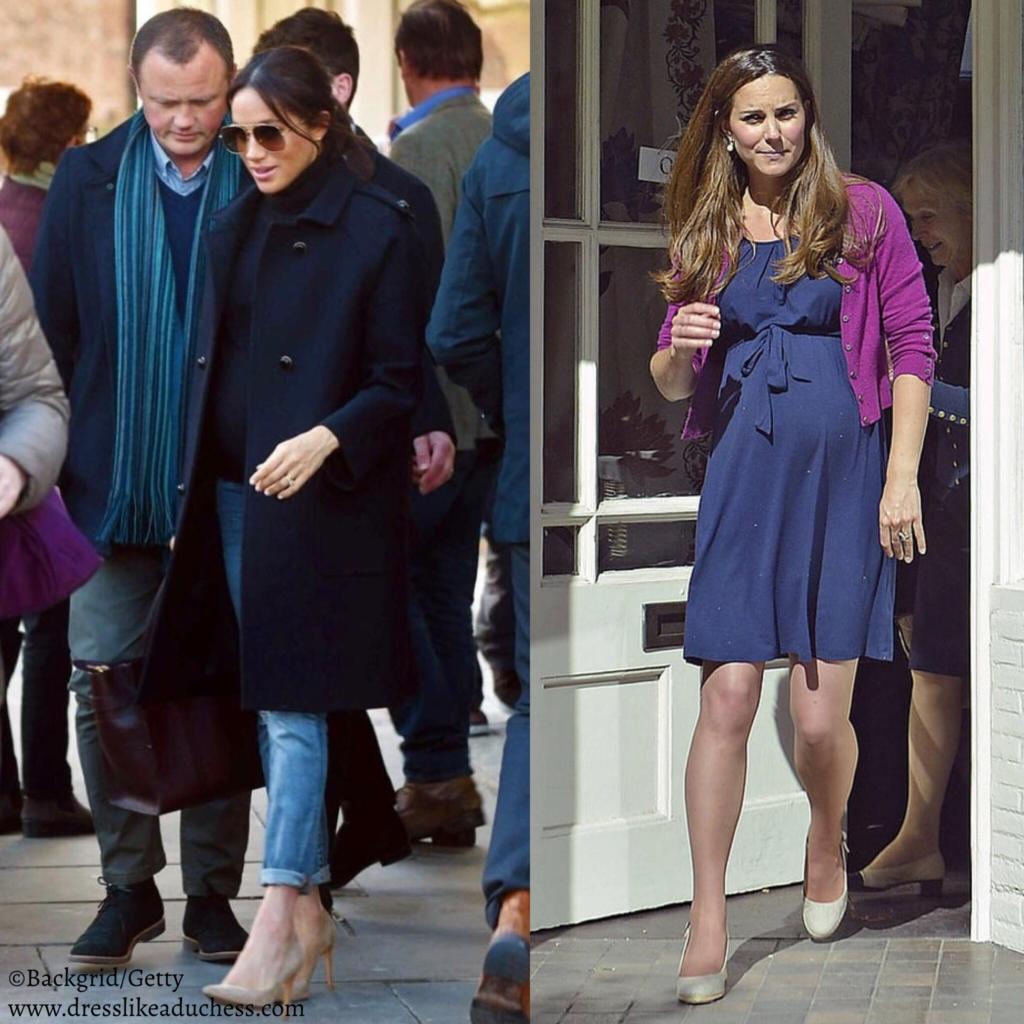