Kate Middleton in White Shirtdress for Day 2 of Wimbledon

The Duchess of Cambridge played commoner for the day and shunned the royal box in favor of Court 14 at Wimbledon to watch the action up close and personal. The duchess looked relaxed and carefree as she chatted with other spectators. As an aside, Harry and Meghan also recently sat in the stands for an Invictus baseball game event and also enjoyed being a part of the ‘commoner crowd.’ Kate’s pals were actually athletes themselves and the duchess was sandwiched between tennis players Katie Boulter and Anne Keothavong.

For this fun warm weather outing, the duchess selected a white wiggle dress by British designer Suzannah. Lately, Kate has been loving casual and breezy retro-minded midi dresses and has found her style stride with a collection of daywear ensembles that are approachable and affordable. 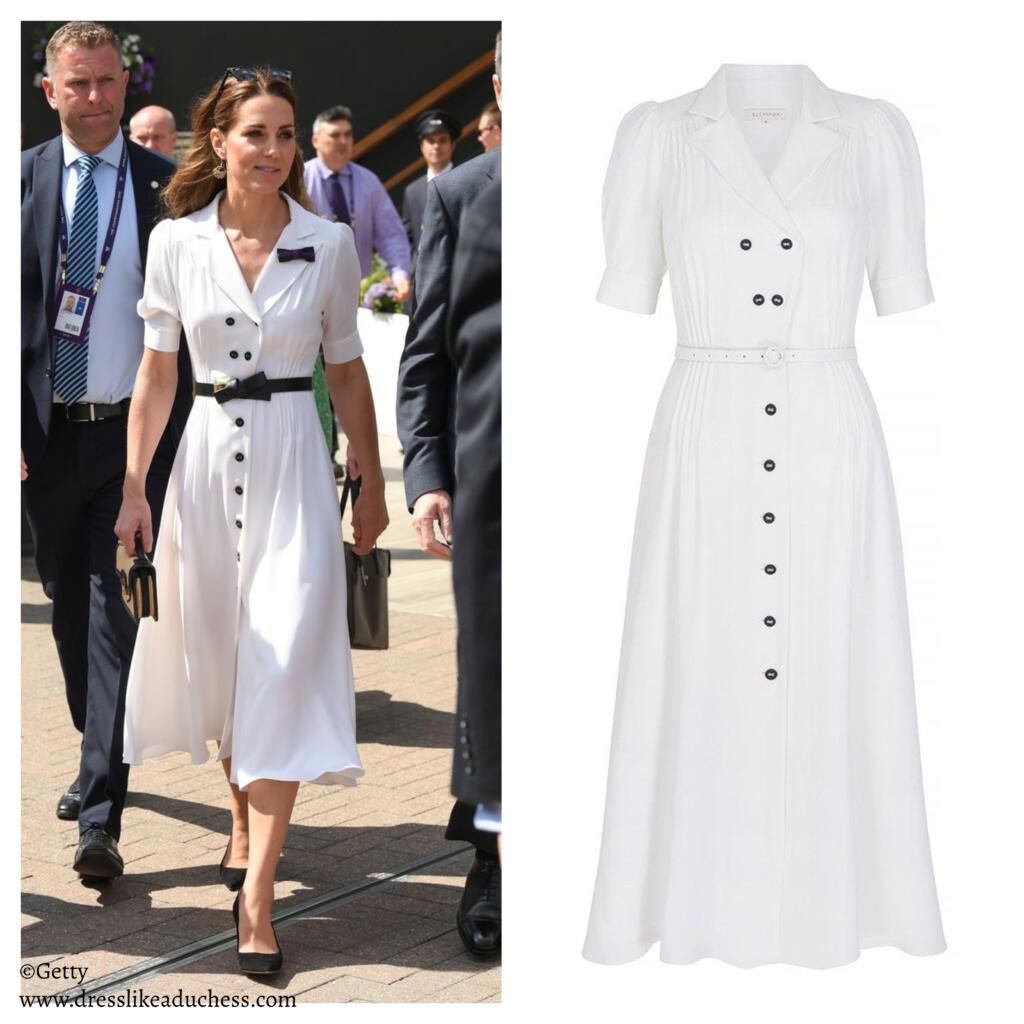 Kate’s also been taking notes from sister Pippa Middleton and wore a Sandro Paris dress (also loved by Pippa) to a garden picnic recently. Suzannah is a British brand and Pippa has sported the designer to multiple tennis outings. 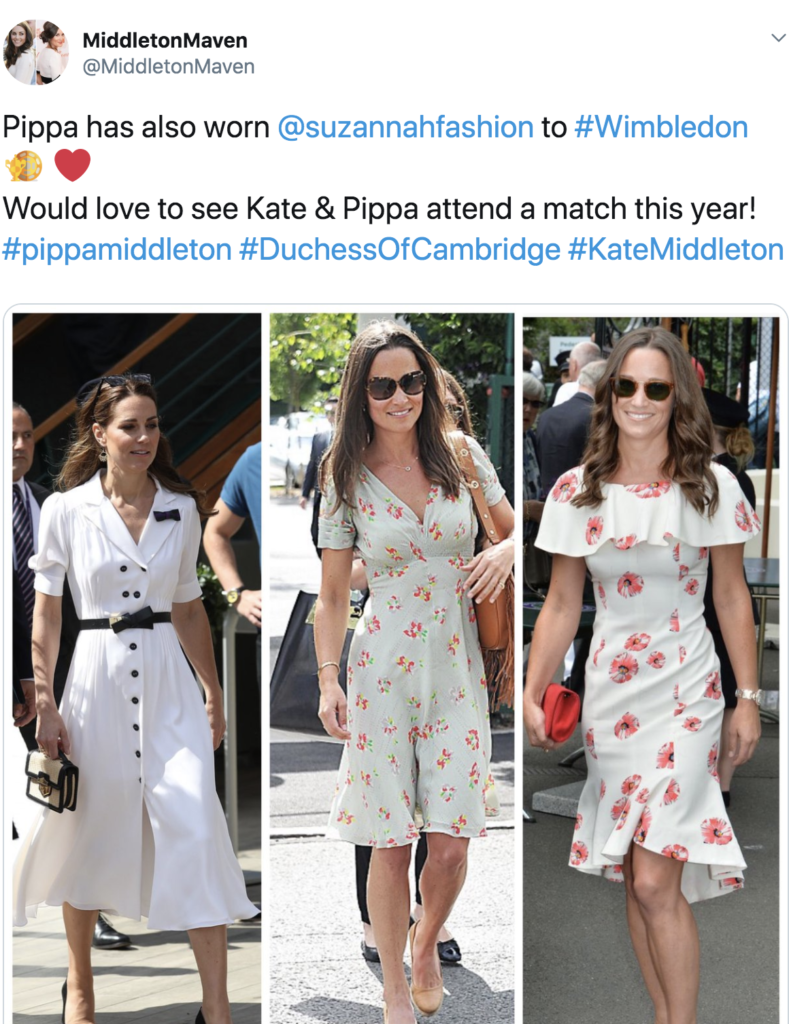 Kate could be taking style cues from her sibling but also may have taken notes from sister-in-law Meghan Markle who wore a white button front shirtdress with black accessories to Royal Ascot 2018. 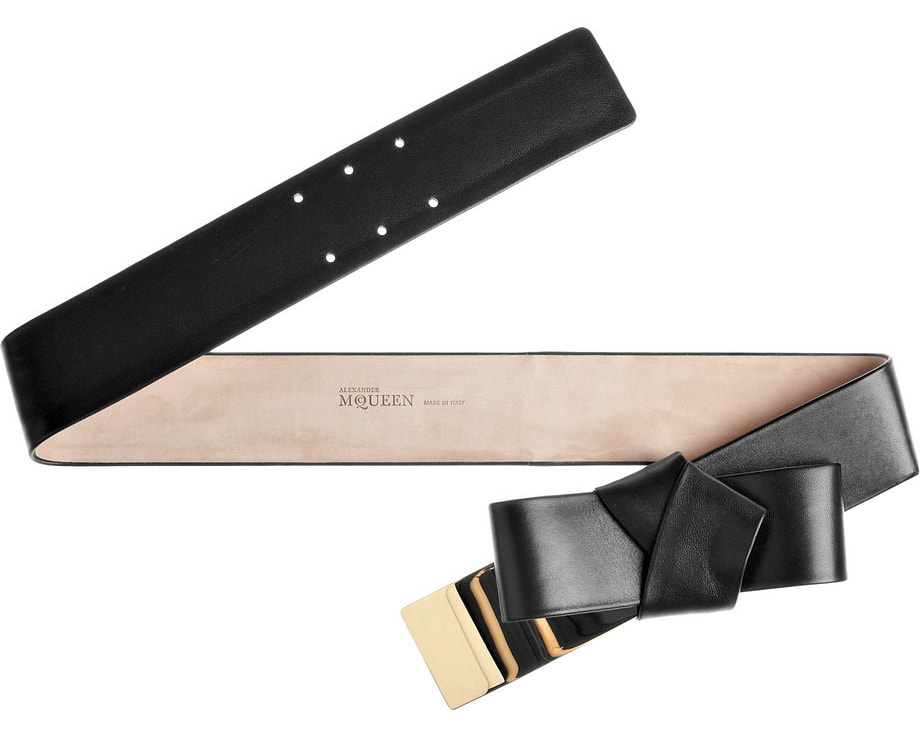 In addition, Kate carried a straw bag which we recently discussed is a favorite of both Kate and Meghan’s. The duchess opted for Alexander McQueen’s Wicca mini satchel featuring a  gold finish lock closure. Kate has carried the Wicca mini satchel before but previously toted the design in leather. 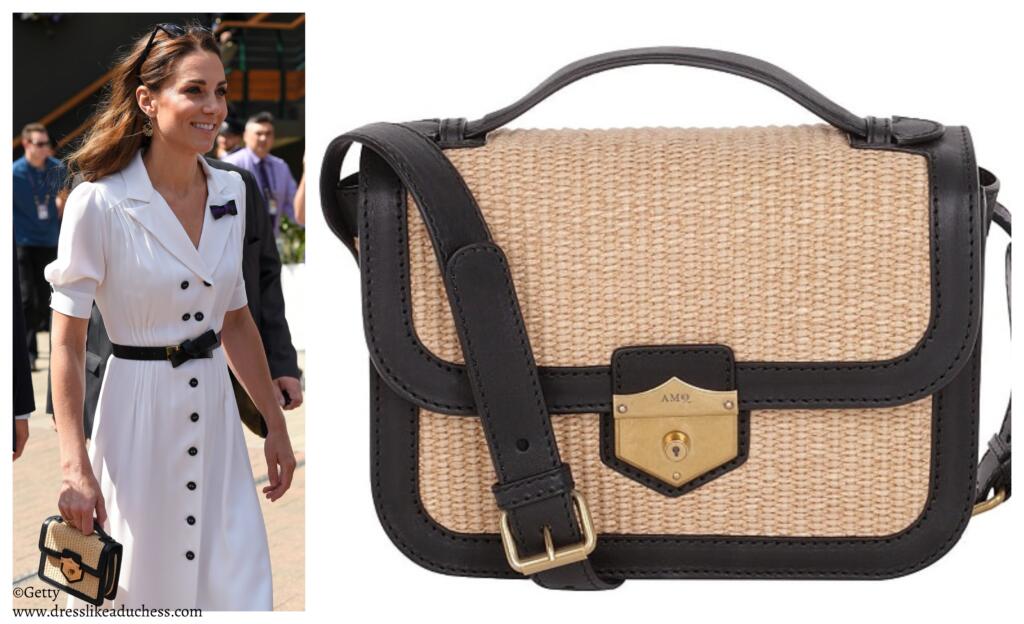 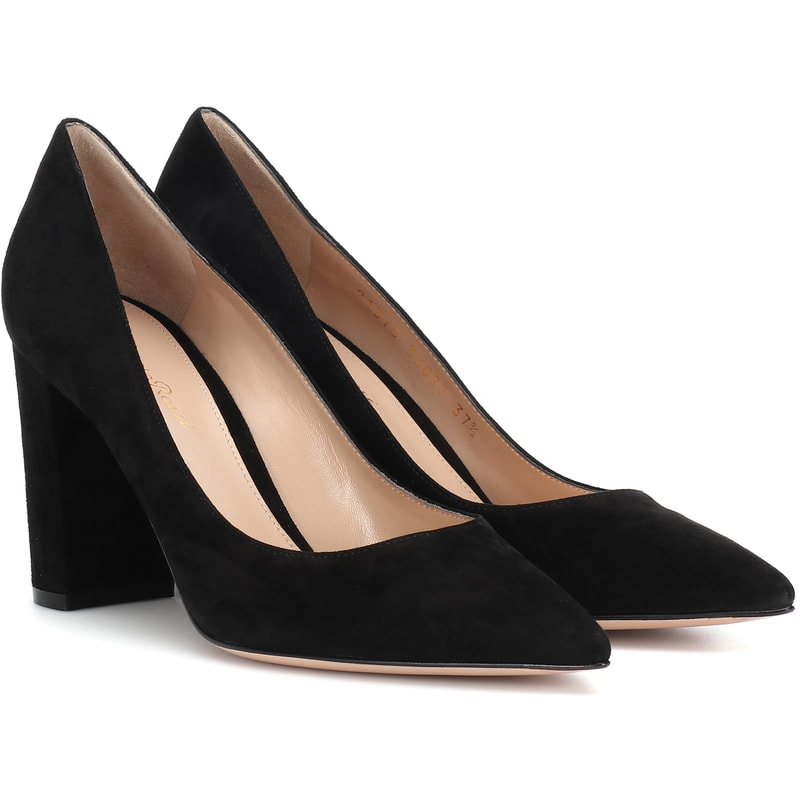 For shielding herself from the sun bouncing off the court, Kate wore new Ray Ban Wayfarer II Classic 55mm sunglasses which are available at Nordstrom. 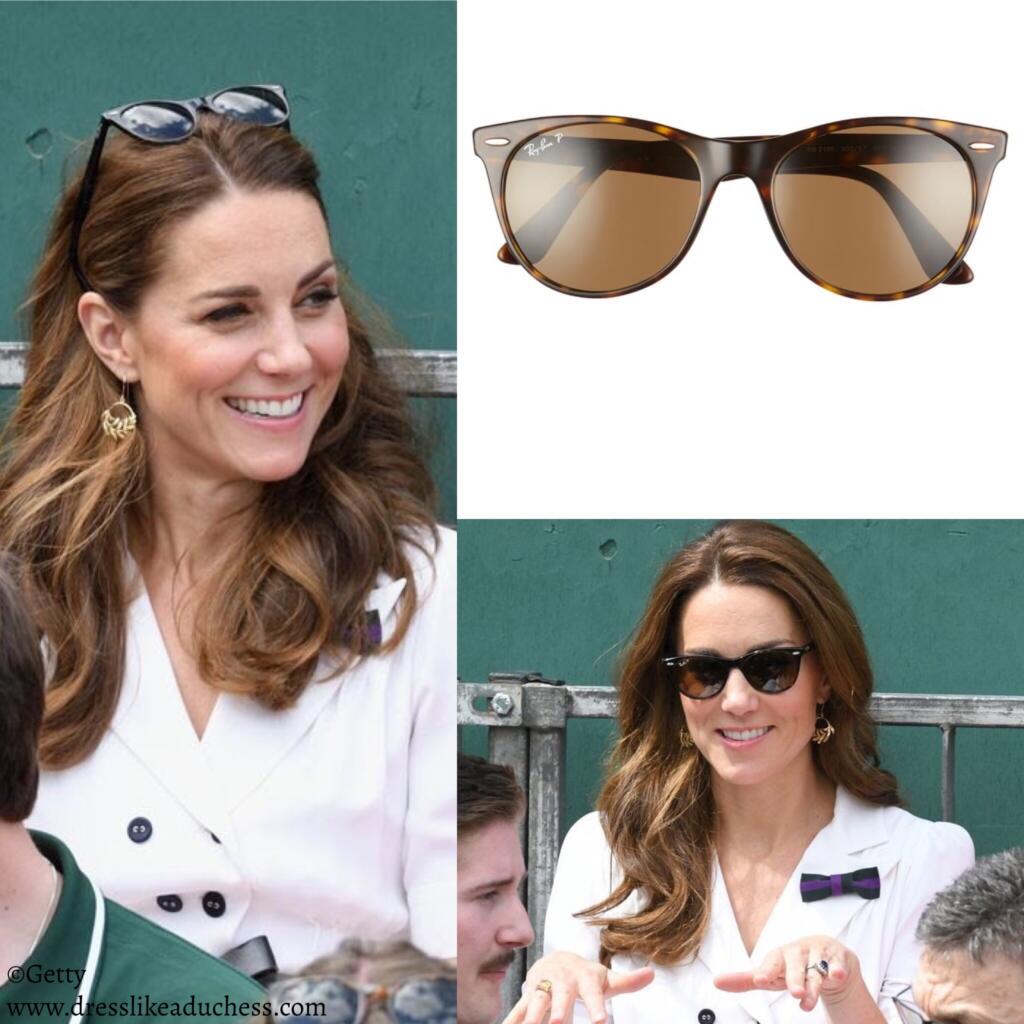 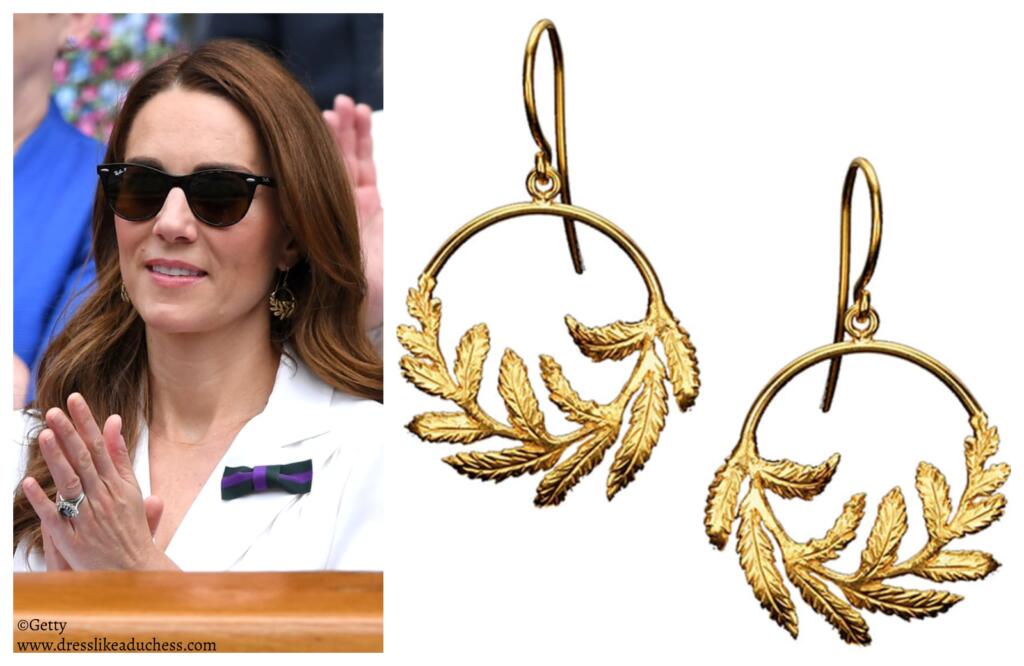 According to our friends at royal.addicted, Kate’s purple and green bow ribbon are the official colors of the Wimbledon tournament and the duchess wore the piece because she is patron of the All England Lawn Tennis and Croquet Club. All female members of the club can wear the bow, while male members often wear a tie in the same colors.

Kate also wore an old citrine ring on her right hand which has yet to be identified.

Duchess Kate is believed to have worn the canary colored cocktail ring as far back as 2008 even though it was rumored to have been a ‘push present.’ It appears the duchess has had the yellow gem in her collection for many years.

And according to sources at Us Weekly, Duchess Meghan is “very much looking forward to attending Wimbledon this month.” So, we will likely see the new mom rooting for pal Serena Williams in the coming days.