While they aren’t in the “single ladies” squad–they still shared a close connection. The Duchess of Sussex stunned in a fit and flare LBD by designer Jason Wu for the premiere of the Lion King in London on Sunday. While Meghan had that new mom glow on lockdown and looked every inch the modern royal and fierce fashionista, the end of the paw printed carpet was the true shining moment of the evening as that’s the spot where Duchess Meghan and the Lemonade singer would lock eyes. The special moment was caught on camera and Meghan and Beyonce embraced in such a friendly fashion that it looked like the pair had a “close existing friendship” according to body language experts.

While the women exchanged sweet compliments–with Beyonce even calling Meghan “her princess”–the two had actually never met in person before the warm meet and greet. Of significant note was how the two women embraced for a hug while Harry spoke with the Disney CEO Robert Iger.

And while Meghan looked beautiful and elegant, Beyonce’s yellow gown was all glam. The singer-songwriter wore Nguyen Cong Tri and added a sparkly clutch by Anna Cecere. Beyonce also complimented little Archie telling the duchess, “that baby is so beautiful.”

When Beyonce and Jay-Z met the Duke and Duchess of Cambridge at an NBA game, the attire was more casual but there was still a great deal of media attention in the brief greeting. 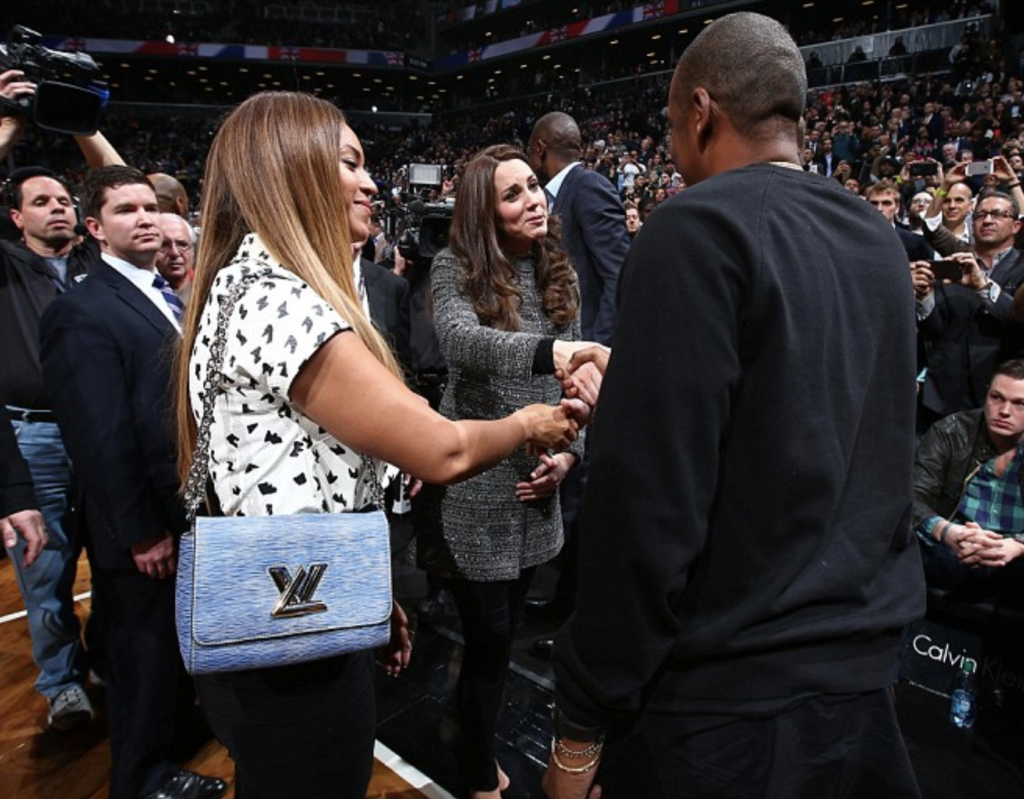 The Duke and Duchess shook hands with pop royalty at the Nets sporting event in Brooklyn in December 2014. Kate and Beyonce reportedly discussed their kids and exchanged notes on the ages of their little ones. For the sporting event, Kate wore a Tory Burch coat (similar) and black skinny jeans. Beyonce wore a black pencil skirt and carried a chain link blue bag.

William munched on popcorn during the game and the two even made it onto the jumbotron. Duchess Kate may have not been interested in the snack as she was pregnant at the time and could have been potentially battling morning sickness and also likely suffering from jet lag due to the overseas visit.

Kate and William sat opposite the rap mogul and his songstress wife but their greeting was still a memorable moment. Kensington Palace courtiers arranged for the official chat and set up the social exchange for the third and fourth quarters of the game. Kate and William also met with other NBA pros and U.S. political figures during the evening event.

The couples exchange was very cordial and both ladies also wished each other a Merry Christmas.