Duchess of Cambridge and Duchess of Sussex at Remembrance Sunday

The Duchess of Cambridge and the Duchess of Sussex stepped out for a solemn occasion: Remembrance Sunday. Both Kate and Meghan stood on a balcony belonging to the UK’s Foreign & Commonwealth Office building while Prince William and Prince Harry along with Prince Andrew laid wreaths at the foot of the Cenotaph. For the ceremonies, the duchesses along with the Queen, Sophie Wessex, the Duchess of Cornwall and Sir Tim Laurence watched their family below at the monument and observed the proceedings from above.

For this occasion, the Duchess of Cambridge again elected to honor military heroes with her expertly tailored Alexander McQueen coat. The bespoke coat features tassel detailing and a zipper front along with a high point collar. Bearing a resemblance to her coat from last year, Kate has become fond of more structured styles which appear less like outwear and more like uniforms. In addition to her tribute to service men and women with her custom coat, the duchess paid homage to her grandmother with her new poppy pin. Kate opted for a Codebreakers Brooch which is inspired by the rotors of the Enigma machines, from which Allied cryptologists successfully decrypted a vast number of enemy messages during the Second World War. Kate’s paternal grandmother Valerie Glassborow was among those who worked to decipher the secrets of the German Enigma machine at Bletchley Park during the war.

In addition, the mom of three wore her Bahrain pearl drop earrings–loaned from the Queen’s private collection as well as black velvet hat with a veil. Many royal watchers noticed Kate’s updo was an intricate and beautiful chignon style.

On the other balcony facing the national monument, the Duchess of Sussex decided on a wool coat with a D-ring belt from Stella McCartney. The designer drew from the utilitarian styles her father, Paul McCartney wore during the 1970s for her Pre-AW19 collection. The coat is made from felted material into a streamlined double-breasted silhouette which can be defined with a D-ring belt; the coat features a notched collar, long sleeves, two front pockets, a belted waist and a mid-length with gold-tone metal buttons. The coat is available at Saks Fifth Avenue ($2,320) and FarFetch. 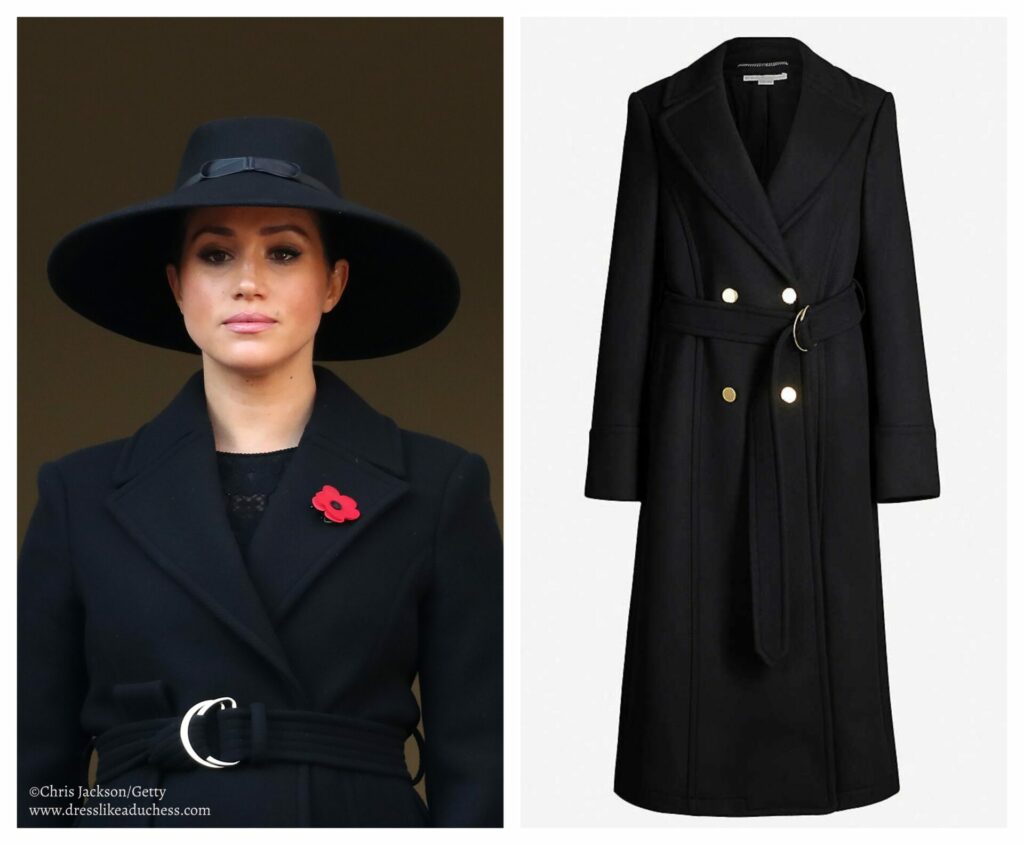 The new mom also opted for a black wide brimmed hat from Stephen Jones. The style appears in felt in the milliner’s Miss Jones AW19 collection — called the Facetime hat. 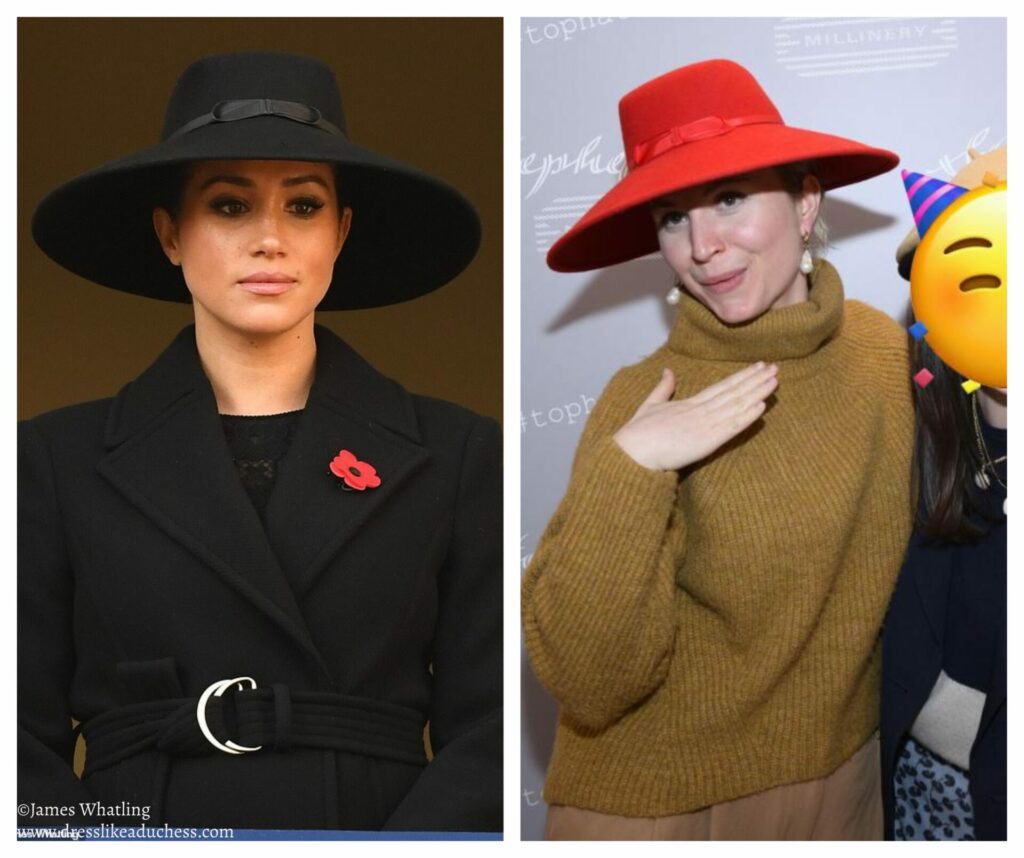 The California born duchess wore a lace dress or shirt underneath her wool collared coat with a silver buckle. She also opted for black gloves and wore a poppy brooch.

As we noted on our Instagram page, Meghan’s style seems inspired by Princess Diana who wore a similar look in November 1991. 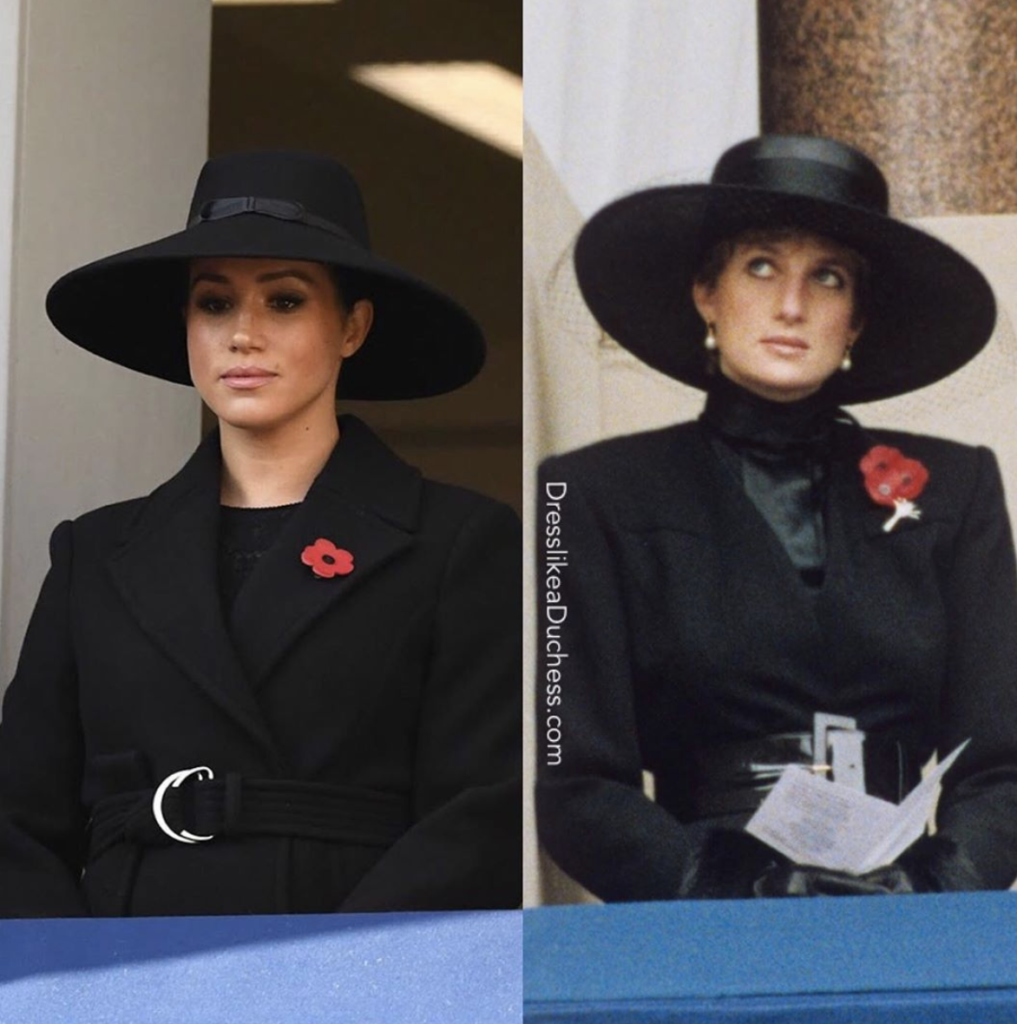