While plans are now formally finalized for the Duke and Duchess of Sussex to begin their lives in North America, it’s believed the couple may continue to spend time at their oceanfront mansion for the foreseeable future. While rumor has it that Meghan is shopping for properties in one of Canada’s most exclusive enclaves, the couple may wait to purchase a home until their transition from full-time royals to ‘non working’ members of the royal family is completed sometime in Spring 2020. In the meantime, the family of three are holed up inside a lavish property in British Columbia.

After chatting with businessman Yuri Miller during his attendance at a three-day Google camp in Sicily last summer, where stars like Leonardo DiCaprio and Naomi Campbell were spotted, the prince reportedly became friends with the Moscow born billionaire who possibly offered the accommodations at the event. Still, other reports claim it was David Foster who is a friend of Miller and is married to Meghan’s old friend Katherine McPhee who sourced the home for the royal couple. And to complicate matters further, reports have indicated the actual owner is Frank Giustra, a Canadian billionaire and philanthropist. Either way, it’s confirmed that Meghan and Harry spent their six week holiday break at the palatial estate known as “Mille Fleurs” (a pattern of flowers and leaves used in tapestry, on porcelain, or in other decorative items) and are believed to still be residing in the home.

According to the Union Journal, the home was listed at nearly 18.5 million dollars fully furnished in 2012. The waterfront property boasts an 11,416 square foot main house with five bedrooms and eight bathrooms as well as a detached 2,349 square foot guest cottage with an additional three bedrooms and two bathrooms.

Interior spaces include a paneled study, two-story living room, formal dining room, chef’s kitchen with pizza oven and a media room. The grounds are professionally landscaped by Victoria-based landscape firm Rusnak Gallant Ltd. and include a beautiful conservatory as well as two access points to the beach.

The French country inspired home boasts a Chef’s kitchen with granite countertops and a pizza oven.

In addition, the home has a quaint study for work or leisurely reading.

Inside the conservatory there are multiple chandeliers and plenty of plants and greenery. 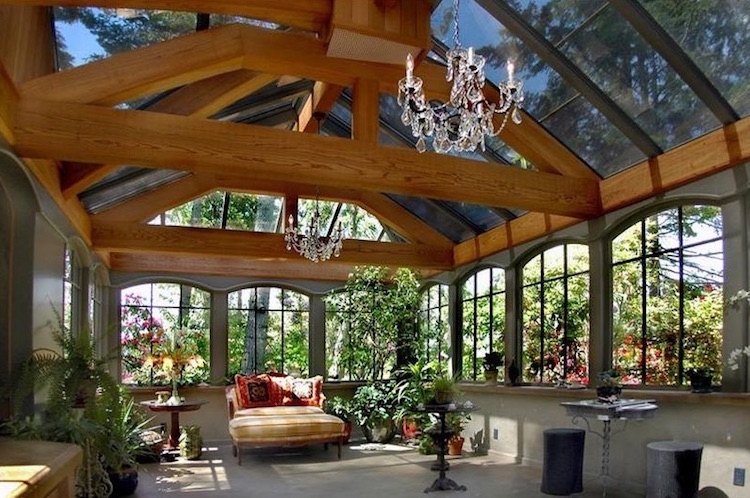 The main part of the living space boasts vaulted ceilings and plenty of magnificent water views.

The bedrooms are quaint and cozy–perfect for relaxing and reading.

It’s believed Meghan is entertaining friend Heather Dorak at the property and that the duchess will be staying with Archie until Harry flies back to Canada after meetings next week.