The royal wedding day has arrived. Inside St. George’s Chapel an arch of white flowers has been erected which will surround the royal couple as they become husband and wife.

Meghan Markle and Prince Harry will get married today, May 19th, 2018, as the world watches. Henry and Meghan will enjoy new titles as a married couple as they have been appointed the Duke and Duchess of Sussex as of this morning.

The Prince and his wife to be will each have wedding rings designed from Cleave and Company with Meghan’s being fashioned out of Welsh gold while Prince Harry’s platinum band will have a textured finish.

Rumors are rampant that Claire Waight Keller has designed Meghan’s dress with CBS confirming that top-contender Stella McCartney is not the designer. Update: Clare Keller has been confirmed as Meghan’s bridal dress designer.

Prince Harry has left his hotel in a convoy to meet his family before heading to the chapel.

Charles Spencer, brother of the late Princess Diana has arrived with his wife Countess Spencer. Other notable arrivals include Oprah in a tiered baby pink midi dress, along with James Blunt and Idris Elba. 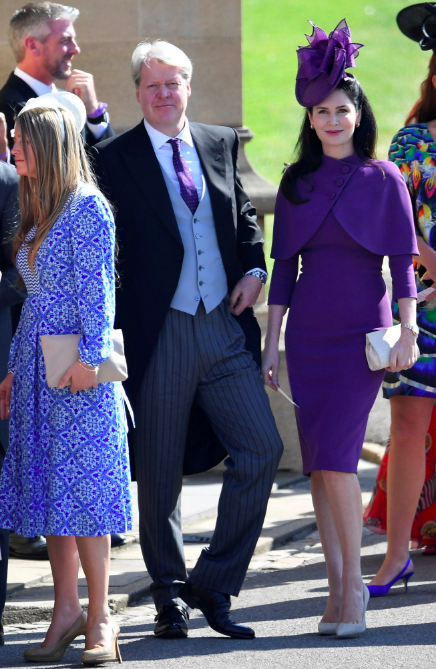 Amal Clooney arrived with dapper looking George Clooney in a yellow cap sleeve dress and hat with a veil while Victoria Beckham was seen in a navy dress similar to the one she wore at Prince William and Kate Middleton’s wedding.

Serena Williams arrived in a baby pink dress, Elton John was spotted inside the chapel and the cast of Suits arrived together including Patrick Adams, Jacinda Barrett and Sarah Rafferty.

Cressida Bonas, another former girlfriend of Prince Harry arrived in a printed midi dress while the Duchess of York was seen in a navy dress with pale pink lining.

Carole Middleton was also inside the chapel wearing a pale mint skirt suit.

The bride and her mother departed the Cliveden House Hotel in a Rolls Royce giving photographers the first glimpse of her veil and tiara.

Meghan Markle’s wedding dress is in fact confirmed to be Clare Waight Keller for Givenchy. Meghan’s earrings are Cartier (@solidmoonlight Twitter-thank you). The bride’s hair was styled by Serge Normant and her makeup done by longtime friend Daniel Martin. Meghan’s glittery tiara was a surprise to many and was straight from the Queen’s jewelry vault. 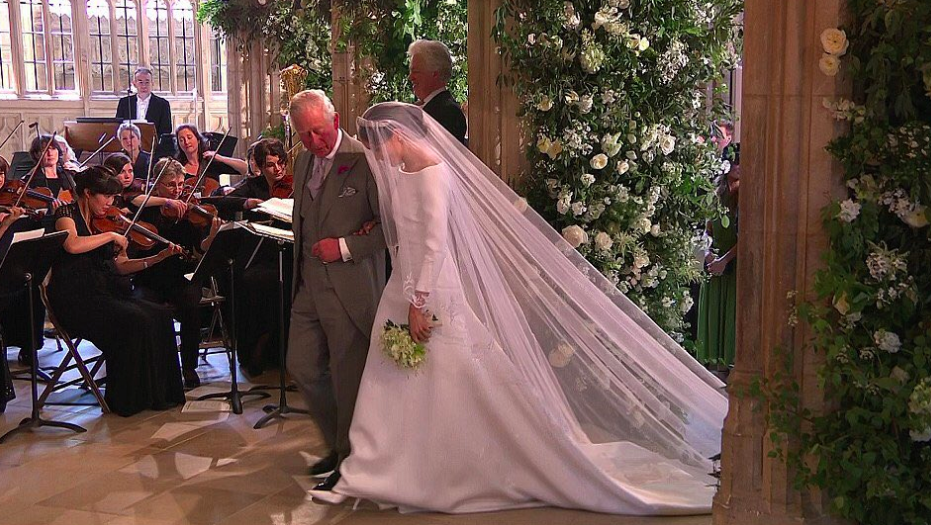 Meghan wore the Queen Mary Diamond Bandeau tiara. Her Majesty had reportedly invited Meghan to Buckingham Palace ahead of the big deal to select her ‘crown.’

After saying their vows and exchanging rings, Meghan is now Her Royal Highness Princess Harry, Duchess of Sussex, Countess of Dumbarton and Baroness Kilkeel. Together they are the Duke and Duchess of Sussex.

Harry and Meghan are officially married and have gone on the carriage procession through Windsor. They will be seen before the evening reception hosted by Prince Charles at Frogmore House later this evening.

The Duke and Duchess of Sussex gather with their family and friends outside the Chapel, and are greeted by 200 guests involved with organisations closely associated with the couple #RoyalWedding pic.twitter.com/b8vHcgq979

Images of the Day:

Flowers outside Winsdor castle include beautiful displays by Philippa Craddock and her team with foxgloves, white stocks, flowering birch, beech, hornbeam and delphiniums plus a very regal and romantic south door floral arch.

The large crowds gathered on the walk to Windsor Castle.