Since Duchess Meghan and Prince Harry are so wildly popular, there’s bound to be intense scrutiny with every move they make. The comely duo appear to be happier than ever and are seemingly adapting to their new roles as parents with aplomb. So, it’s a little puzzling when royal sleuths try and ‘uncover’ hidden messages, meanings or secrets buried in the couple’s most charming photos. The latest unusual conspiracy surrounds the Sussex family christening portrait–some social media users have claimed the picture is not as it appears. 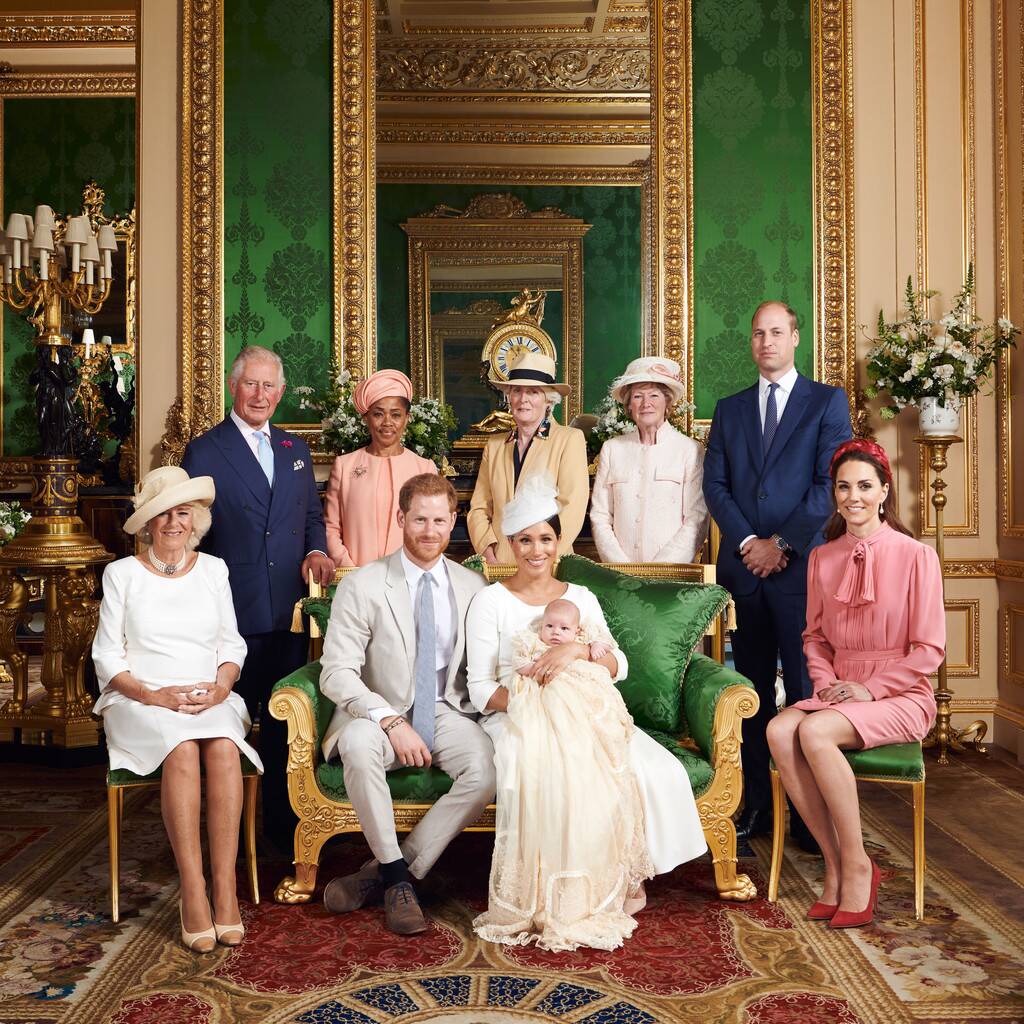 Some social media theorists claim Archie’s photo received a substantial amount of post editing and that among other things: Meghan’s ring is bigger in the photo than in real life, Kate’s chair legs are missing, Camilla’s dress has been altered, Doria’s face appears cropped, Kate appears flat and “mannequin like” and Prince William’s head is “misshapen.” 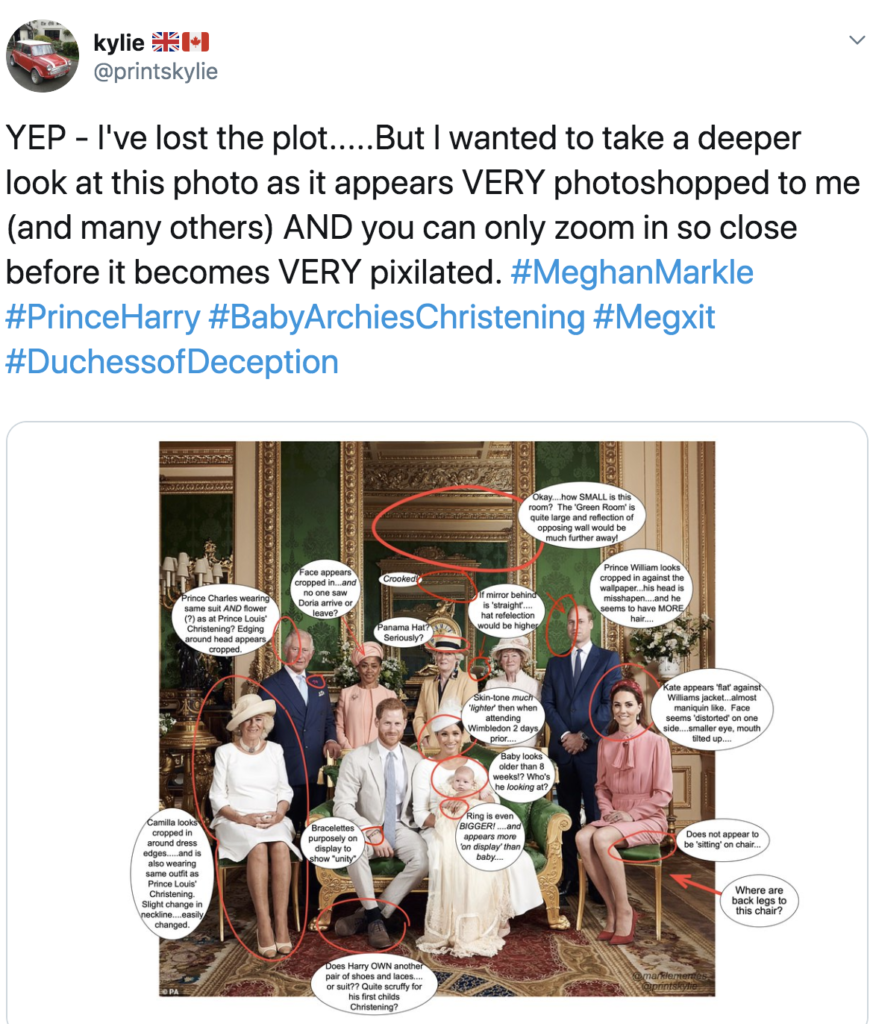 Some Internet “detectives” claim William is far too tall in Archie’s photo (and towers above father Charles). Others claim Will’s head of hair appears thicker and more voluminous (can you blame a guy for having a good hair day?). Still, other online commenters say the duke appears pixelated while some claim his expression was one of strain and disdain. In fact, William’s neutral expression was likely intentional as to not distract from Meghan and Harry’s shining moment. Keep on, keeping on Will! 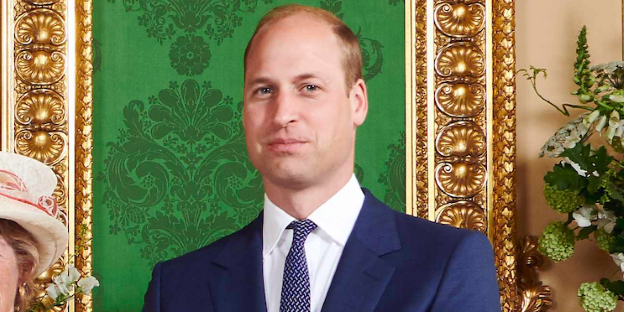 Some online theorists are certain Archie’s photocall and christening took place on the same day. The proof? The conspiracy-happy digital detectives claim Harry’s suit is the same and Meghan’s shoes are identical. Further craziness in online forums are claims that Archie’s photo data indicates it was taken on May 8th, 2019–the same day as the photocall at Windsor. However, notable fashion and news outlets have said that in fact Meghan wore beige suede Manolo Blahniks for Archie’s debut and bespoke nude Dior pumps for his christening.

There was some confusion about Kate and William’s fashions in the official photos as both appeared to arrive in different frocks for the christening. While completely normal to change clothes or have an outfit change for official portraits — some thought this was a sure sign of royal shenanigans. Further speculation claims Archie was actually christened on Princess Diana’s birthday (July 1st) or Independence Day (as originally reported). 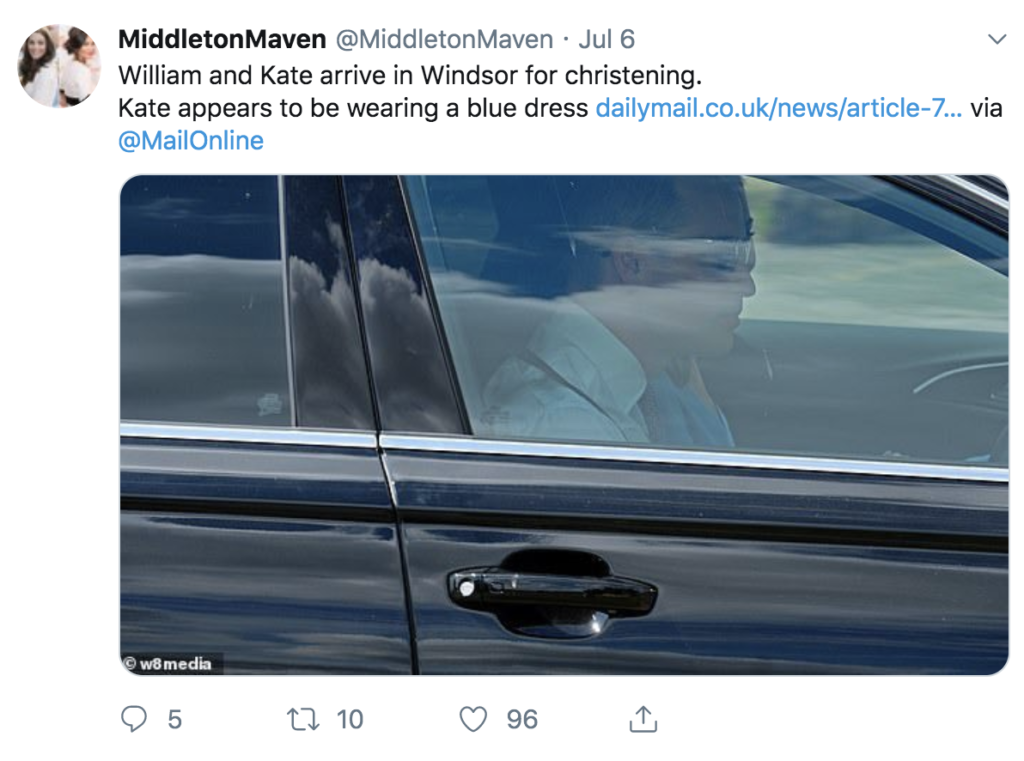 Some media outlets were quick to discover the clock in the photos shows a time of 11:54am. Archie’s photos were released four hours later as promised but theorists were already making mountains out of mole hills. Some claimed William drove his Audi into Windsor Castle grounds around noon but other media outlets said it was actually in the morning as expected and little Archie was christened at 11am per the Court Circular.