The Duchess of Sussex has kept her promise to “hit the ground running” and has capped off a very exciting summer with a guest editor position with British Vogue. While hesitant at first to summon the courage to ask for the coveted role, she eventually took the leap and sent an email to editor Edward Enninful. The duchess recalls receiving the ‘yes’ from Enninful, “Sitting on my sofa at home, two dogs nestled across me, I quietly celebrated when the words appeared on my screen.” In behind the scenes images, Meghan was captured wearing a Gucci tweed dress and Everlane jumpsuit. 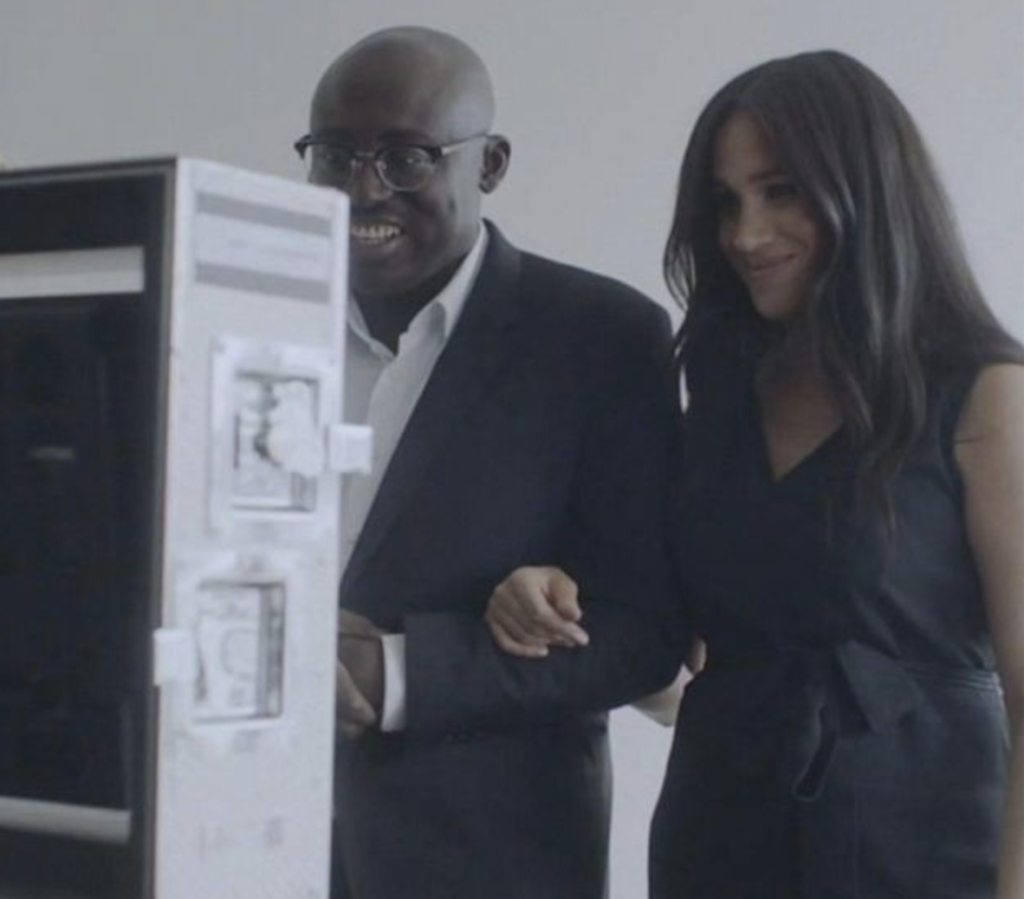 The duchess would go on to undertake a seventh month process entailing many meetings with British Vogue’s Editor-in-Chief. As Meghan says, “Within a week, Edward and I were having our regular meetings – discussing goals, ideas, who would feature on the cover, all while I was undergoing a crash course in editorial lingo.” And Meghan took the reigns in creating a revolutionary issue of what she terms “levity and substance.” The cover image features women who are “forces of change” in society and the special list includes models, politicians, celebrity activists and more. 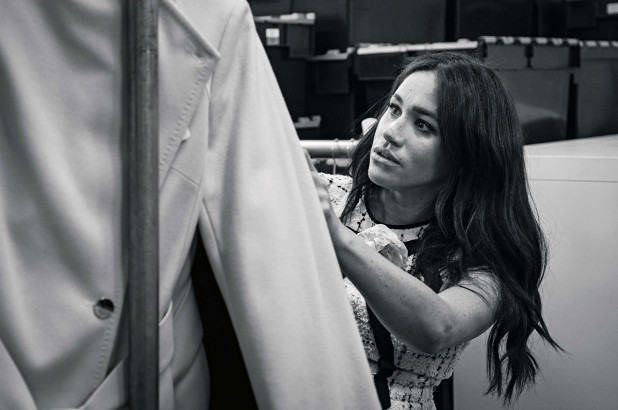 Duchess Meghan declined the cover and instead sought to feature women she admires and respects like Salma Hayek, Jacinda Arden and Christy Turlington Burns. Enninful recounts how Meghan was very involved with the labor of love–right before her real life labor. He says she was active participant in co-editing the issue and was very “hands on” throughout and after her pregnancy. Meghan also interviewed Michelle Obama for the illustrious issue. 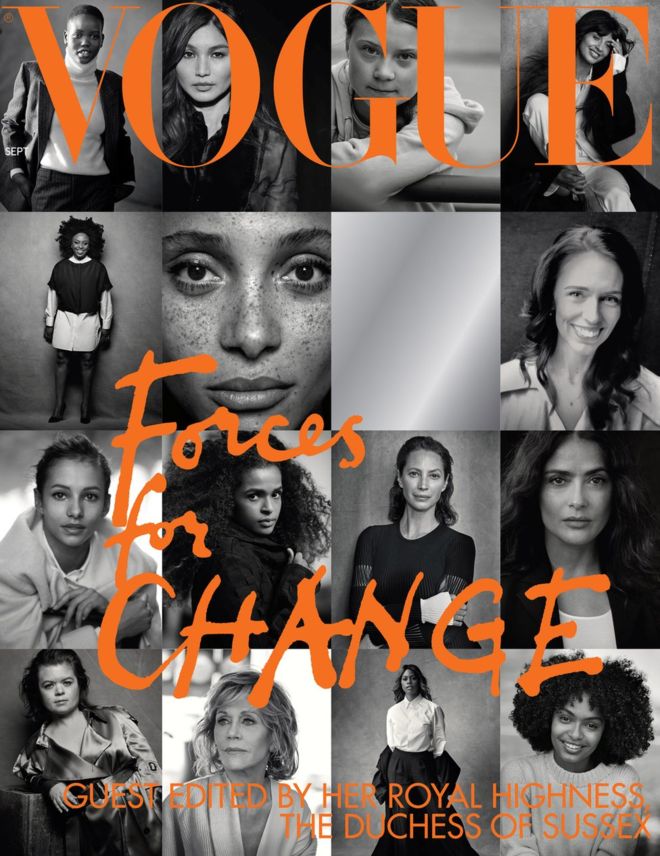 The ‘laborious’ work will no doubt be a best seller for Conde Nast and could even open up future possibilities for the Duchess of Sussex to have a recurring column in the glossy high-fashion magazine. Markle and Enninful both discussed their love of writing (over mint tea!) in initial planning meetings–so there’s always a chance she could continue her love of blogging and move forward as a regular contributor for the print publication.

Meghan was captured behind the scenes in her Gucci dress at Smart Works during the Vogue project. 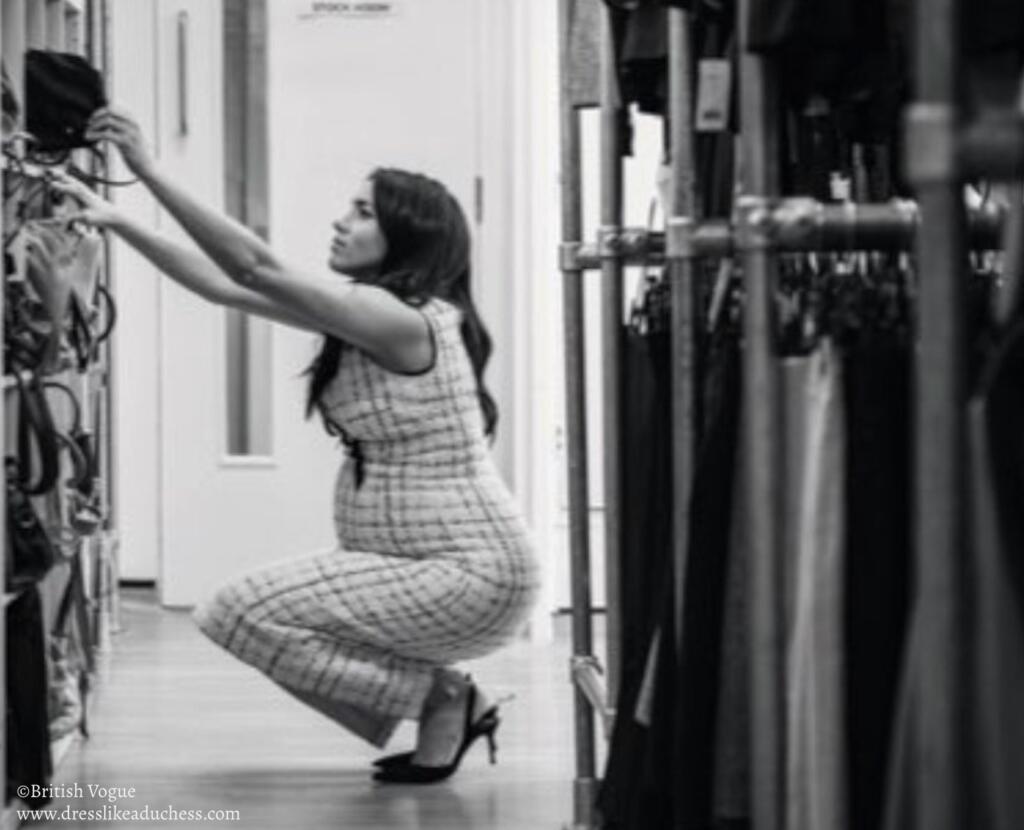 But the Duchess of Sussex is not the first guest editor in the royal family nor is she the first to helm or be featured on the cover of the pages of the fashion tome. Indeed, Princess Diana, Princess Anne and the Duchess of Cambridge have all appeared in the pages. Even Princess Eugenie recently sat for a photoshoot with the popular magazine alongside her sister Princess Beatrice for the September 2018 issue. 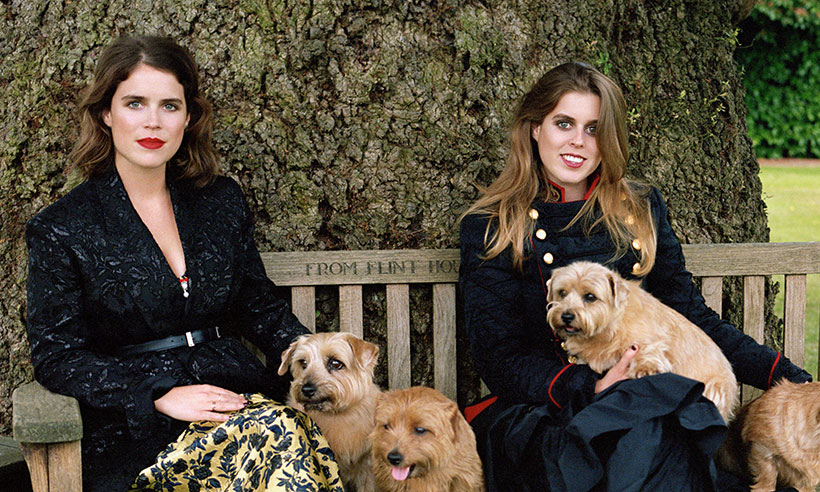 Before Prince Andrew’s daughters made a splash in the newsstand favorite–the Duchess of Cambridge appeared in a charming 10-page spread in the June centenary issue in 2016. Rather than show off her most McQueen-y gowns or diamond splattered midis, the mom of three opted for a casual farm-friendly feel for the ‘100 Years Issue.’ 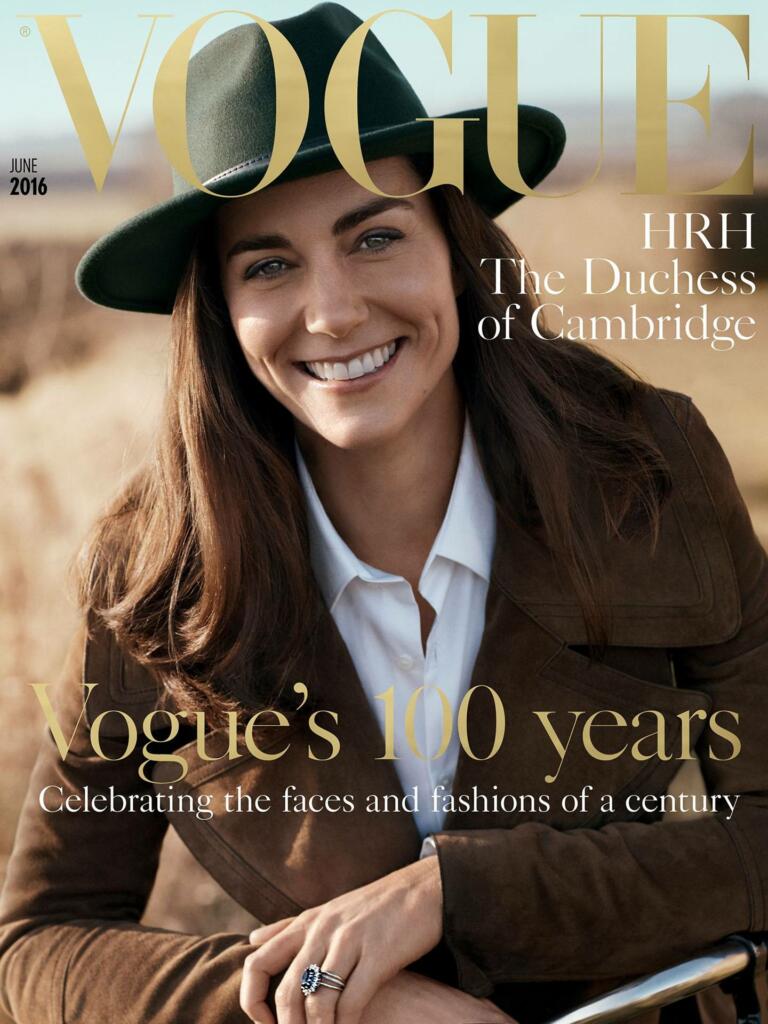 While Meghan elected to celebrate her female icons, the future Queen consort went for a more folksy style. Indeed, the duchess opted for minimal makeup and shunned a sit down interview. According to Vanity Fair, “Kate worked closely with the editor and style director on the shoot eschewing glamour for country chic when it came to the wardrobe.” 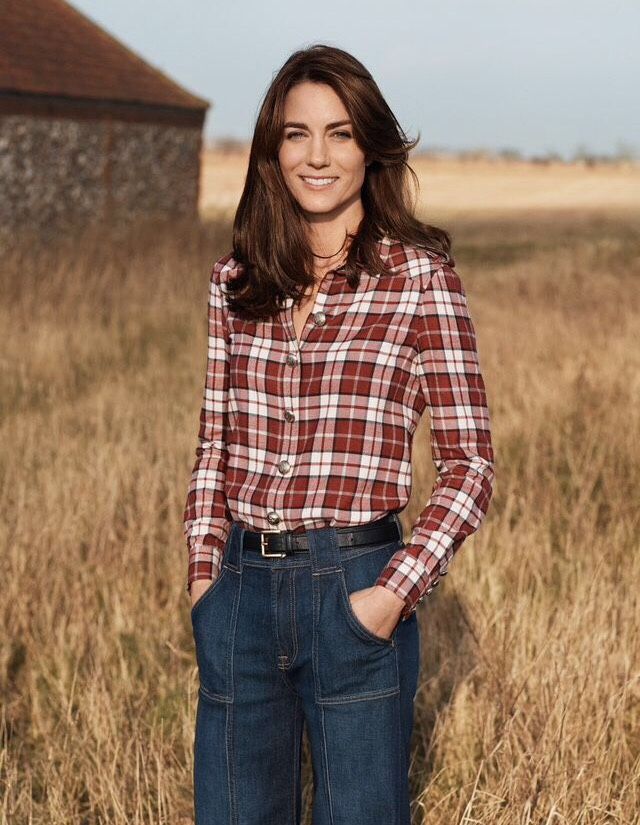 Kate was captured au naturel in the Norfolk countryside for her first magazine shoot (she typically declines). In keeping with her private stance, Kate offered a few original quotes but she did not write or interview for the magazine. She wore a few classic pieces for the spread including a Burberry Double Breasted Suede Coat. 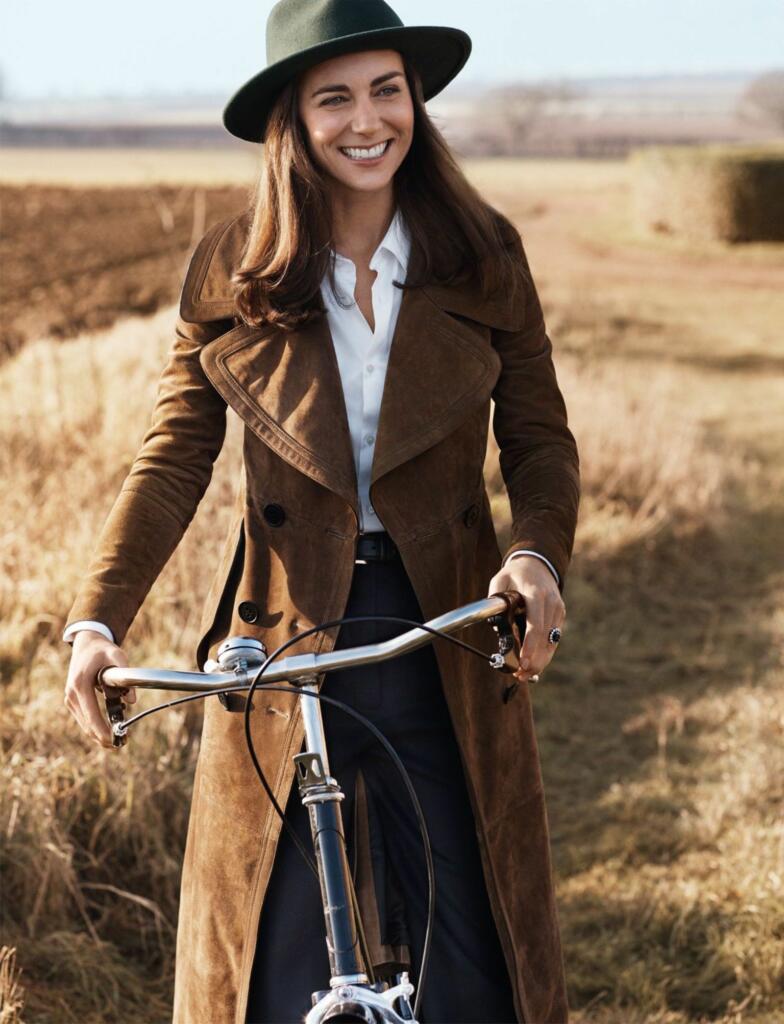 Kate also donned a dark green felt hat by Beyond Retro, a striped red tee from Petite Bateau and black Burberry trousers. For other photos, the duchess wore a plaid button down by Cabbages and Roses and an AG Jeans ‘Lolita Cutie’ jumpsuit. The photos had a quiet farmhouse backdrop and felt decidedly down-to-earth. 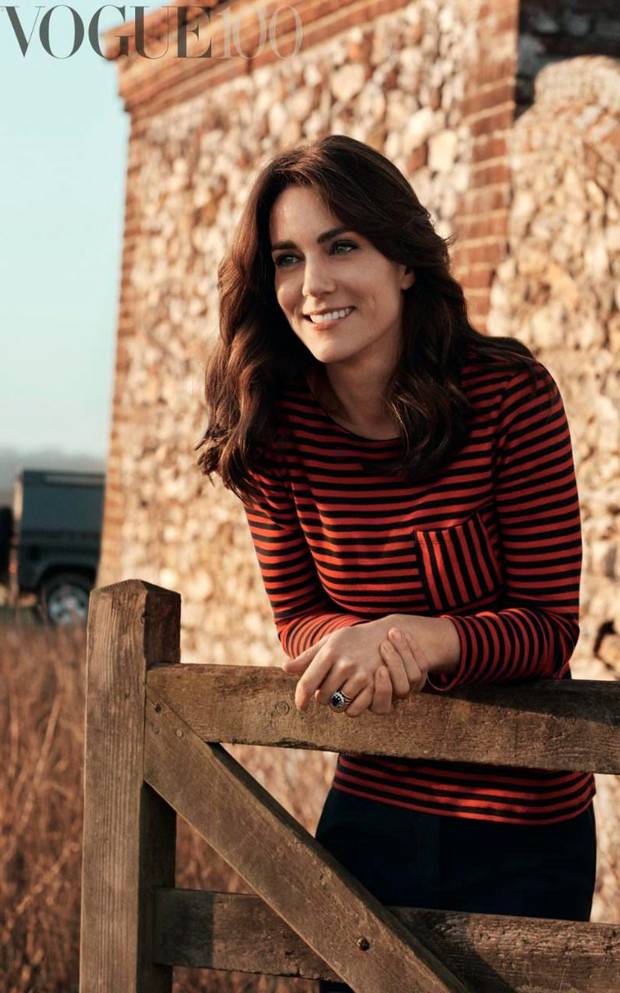 Both ladies approached their Vogue experience with a different outlook and each was super successful in creating their own groundbreaking concepts and beautiful pages. 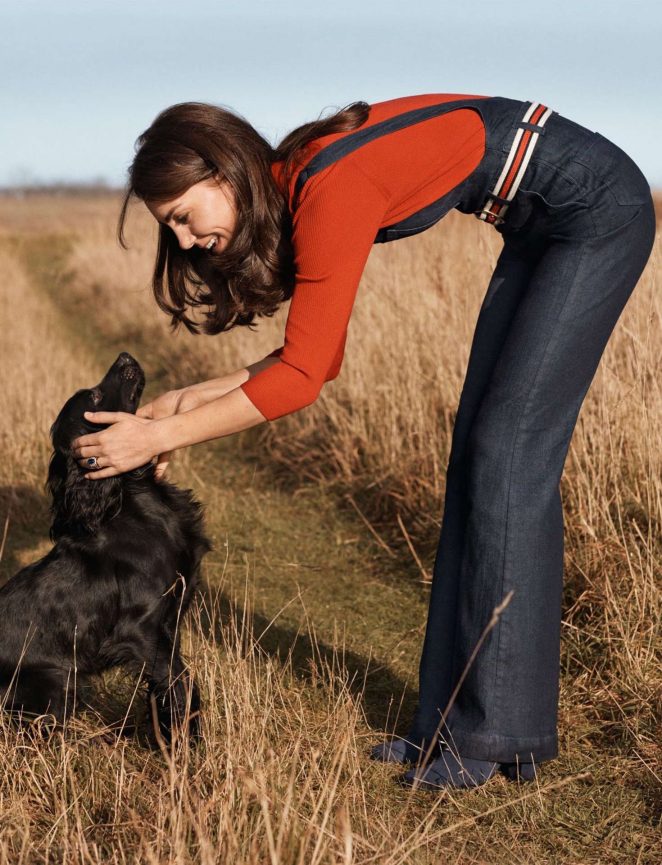