While the Duchess of Cambridge is partial to specific designers like Catherine Walker and Alexander McQueen, that doesn’t mean this mom of three isn’t against a few pieces from other popular brands. The trendsetting royal loves fashionable styles from Michael Kors and often wears the American’s designer’s outfits for more causal functions like school drop offs or occasionally for church or wedding rehearsals. The British born beauty isn’t one to balk at incorporating a few colorful midi dresses or even suits from the across the pond label.

The duchess looked spectacular at Thomas’s Battersea prep school in a red and white floral dress from Michael Kors. Ever the elegant ‘mummy’ — Kate wore the carnation midi with aplomb and selected a waist cinching belt and navy pumps to accent the style. It wasn’t the first time Kate stepped out in the colorful crepe dress as she also selected the ensemble for Prince Harry and Meghan Markle’s wedding rehearsal.

2. Pretty as a Peacock

Dressed in a flowy green frock for a visit to Blackpool, England–Kate looked ready for business in the colorful peacock print dress. For the chilly visit, the duchess added a dark green Sportmax coat (similar), Manu Atelier handbag  and suede black Ralph Lauren tall boots to her daytime ensemble. Kate later wore the chiffon dress to Balmoral for Sunday church service with the Queen as well recently for a trip back to Norfolk from a family getaway in the Scottish Highlands. 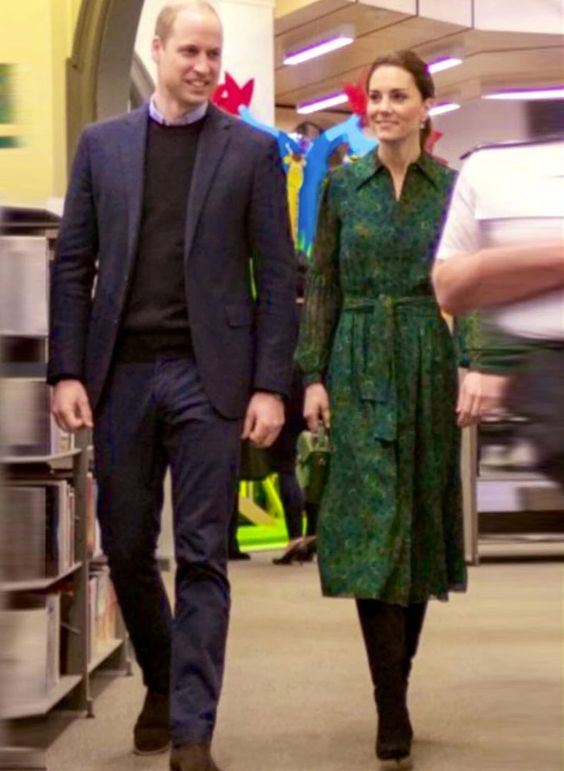 In 2014 on the Royal Tour of Australia, the duchess wore Michael Kors for the first time and stepped out in the designer’s indigo twill jacquard swing coat from his Spring 2014 collection. Kate wore the dress for the final day of the tour in New Zealand where Prince George also accompanied his mom and dad. After its debut, Kate recycled the coat for a royal engagement at Hampton Court Palace in May 2016 and for the unveiling of a new war memorial in March 2017.

The Duke and Duchess of Cambridge joined the Middleton family as well as the Queen and Duke of Edinburgh to mark the 100th anniversary of the end of the First World War Gallipoli campaign at St. Mary Magdalene Church in January 2016. At the Sandringham estate, Kate wore a Michael Kors Collection purple and brown wool suit as well as her Rhumba boots from Aquatalia. The duchess also donned the suit for Christmas church service with her husband as well as Prince Harry and the rest of the royal family.