Meghan Markle’s glitzy New York City baby shower was a chance for the duchess to reunite with old chums and receive a bit of love and affection as a mom-in-waiting. But the glamorous gaggle of friends who attended the luxe affair had serious star power not found in an ordinary shower guest list. From George Clooney’s missus to tennis superstars and members of the fashion elite, Meghan’s squad is reminiscent of one of the most well-known TV series in history: Sex and the City. Indeed, Meghan has all the charisma of Carrie not to mention the designer wardrobe.

Here are 8 Ways Meghan Markle’s Baby Shower Felt Like a Sex and the City Reboot:

Meghan’s glittery soiree took place in the Big Apple and Meghan and her crew were photographed roaming around the city streets in chic all-black ensembles and high heels not unlike Sex and the City’s posh posse. Meghan added Le Specs Air Heart sunglasses (similar) and a cuff bracelet by WWake (similar) plus a Carolina Herrera shoulder bag to complete her downtown duchess look. 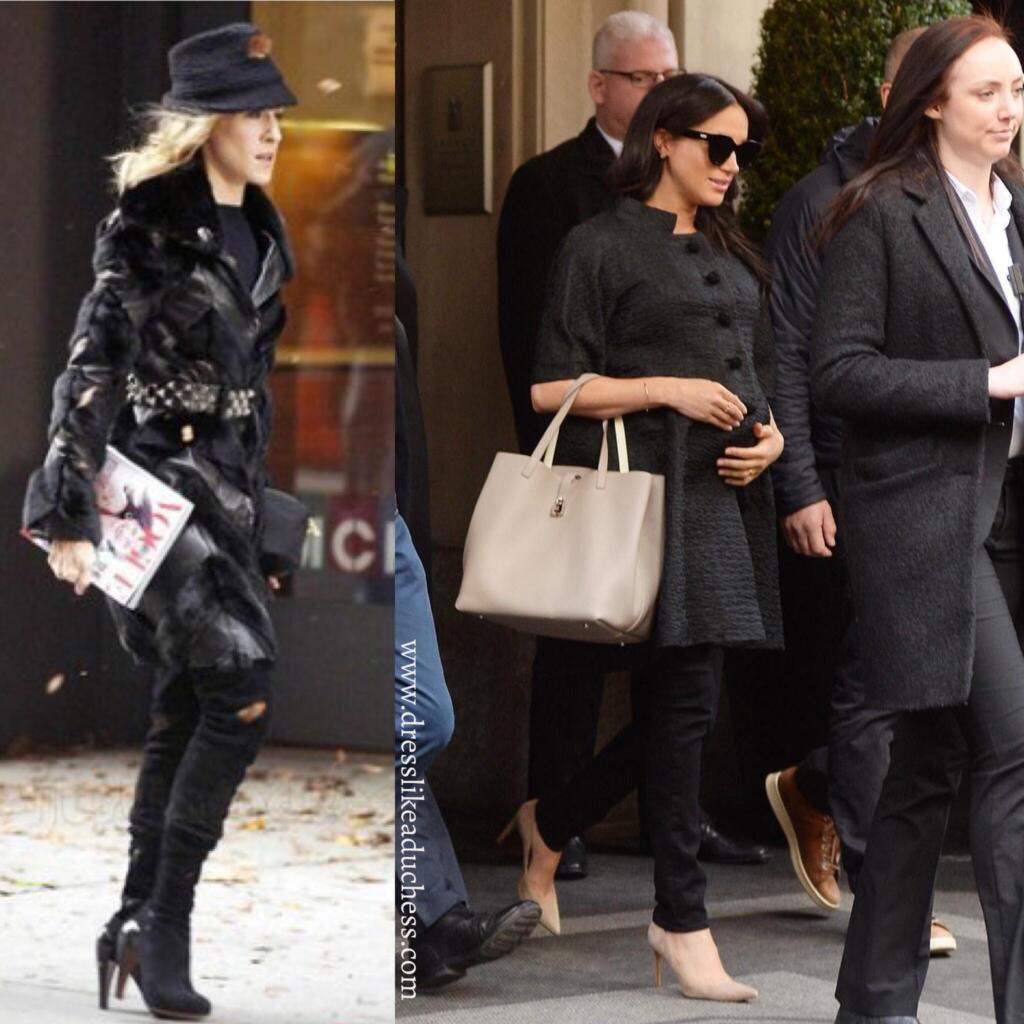 Meghan and her flock of friends made sure to hit up some Manhattan hotspots including the Polo Bar, Cafe Boulud and Laduree Soho for some Parisian palette pleasing macaroons. Just like Carrie Bradshaw, Meghan made sure to steal time away with her friends and even wore Adidas sneakers and Lululemon leggings for her trip home. 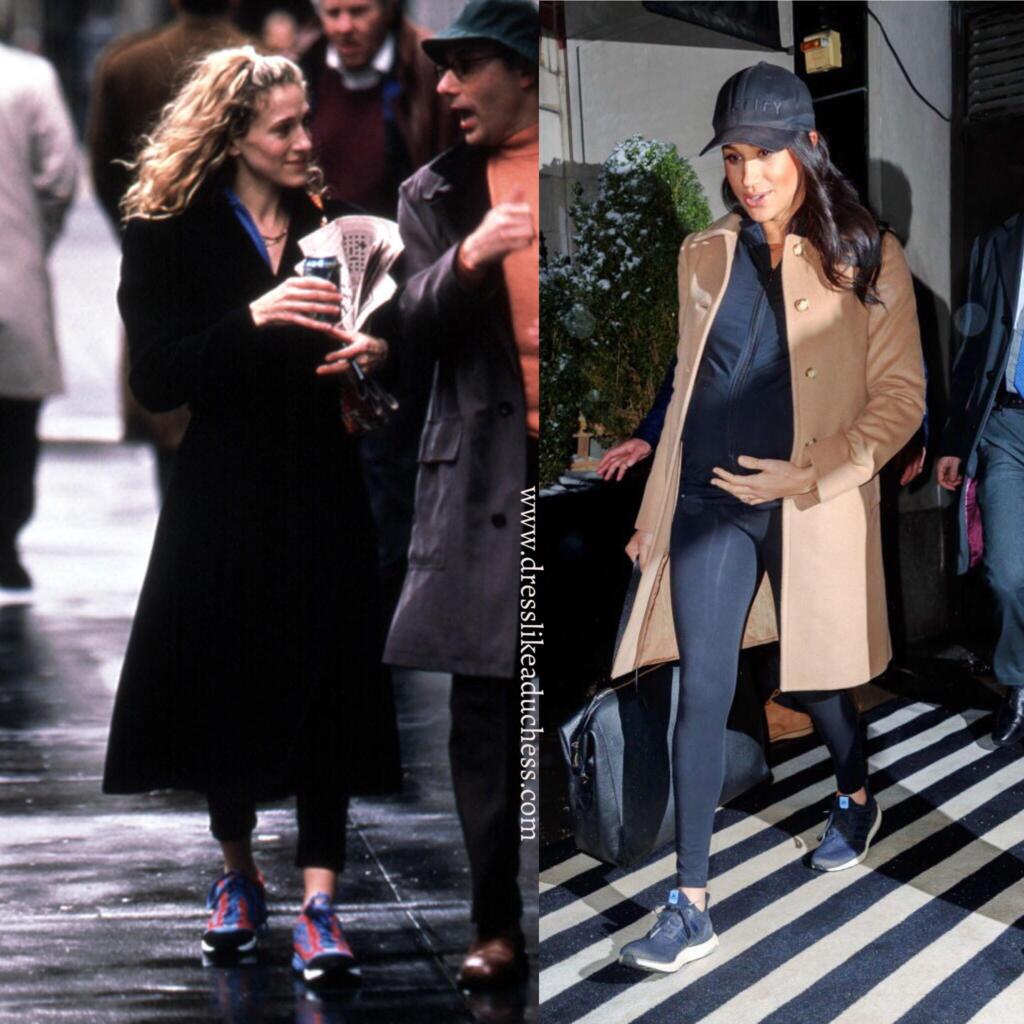 Abigail Spencer was one of the most high profile and visible celebrities to attend Meghan’s shower and she came bearing gifts from Book Culture. Miranda Hobbs also played close confidant to Carrie (Meghan) in the long running television show. 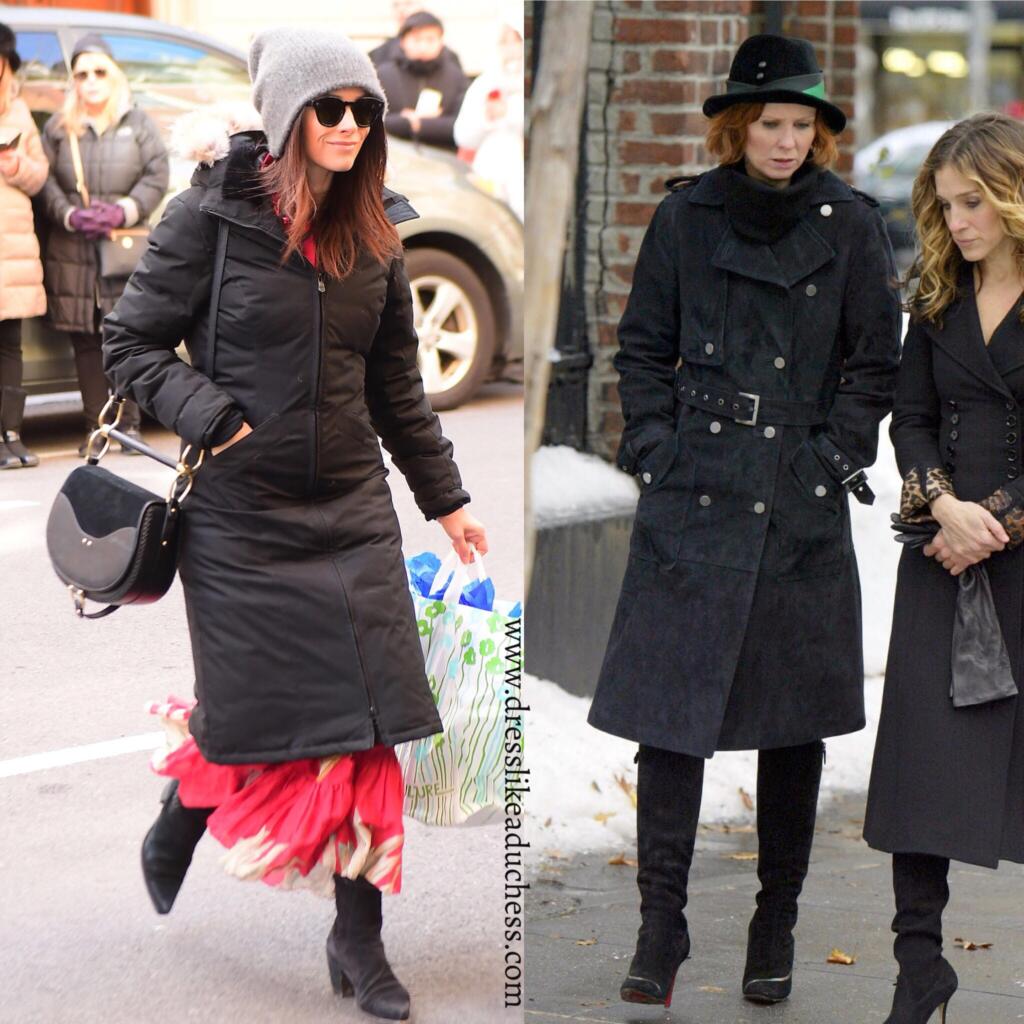 Amal Clooney was one of the most talked about guests at Meghan’s parent-to-be party and arrived in a red hot jumpsuit by Sergio Hudson and gold PVC pumps by Gianvito Rossi. The look was high fashion and had serious Samantha Jones vibes. 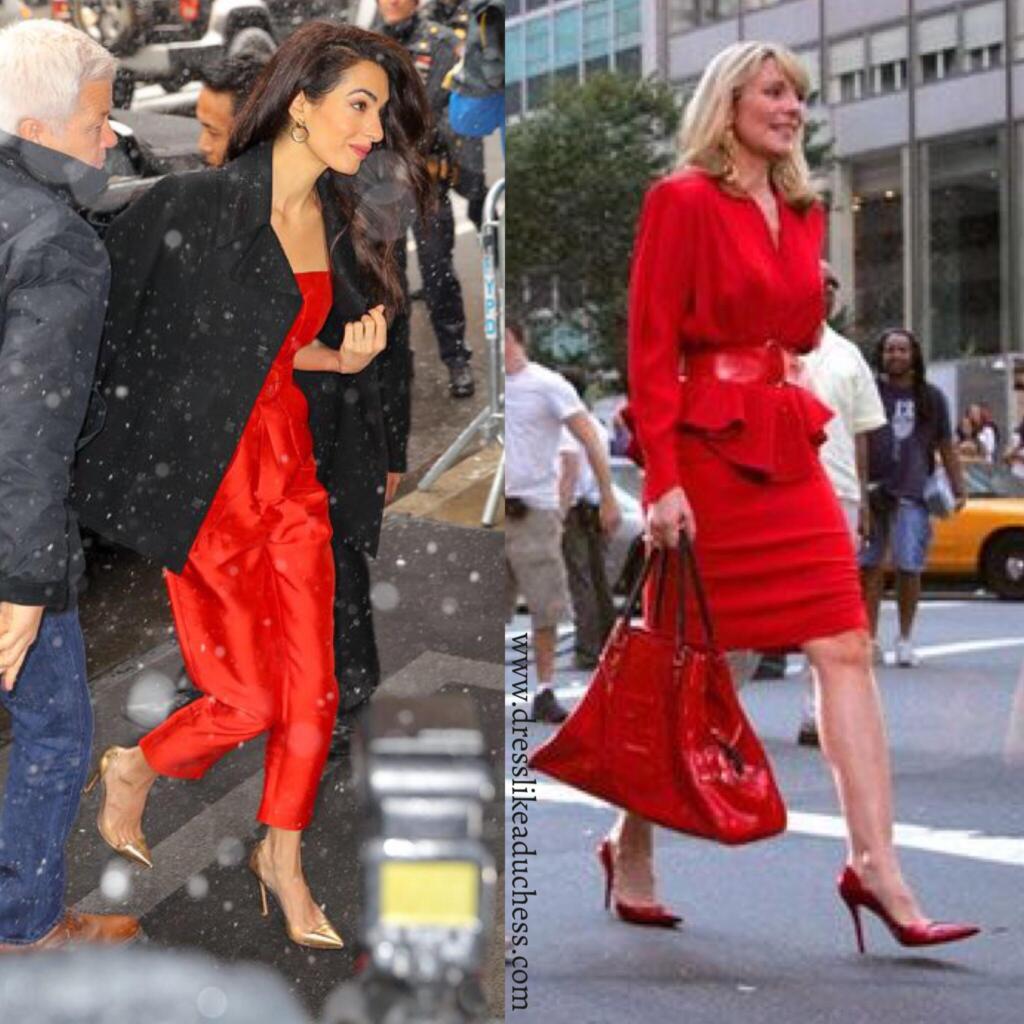 Stanford Blatch was one of Carrie’s closest allies during the beloved HBO series. Indeed, he provided wit, wisdom and a wealth of advice to his often brooding blonde bestie not unlike Meghan’s beloved buddy Markus Anderson. For their bonding sesh, Meghan carried the Falabella chain tote by Stella McCartney. 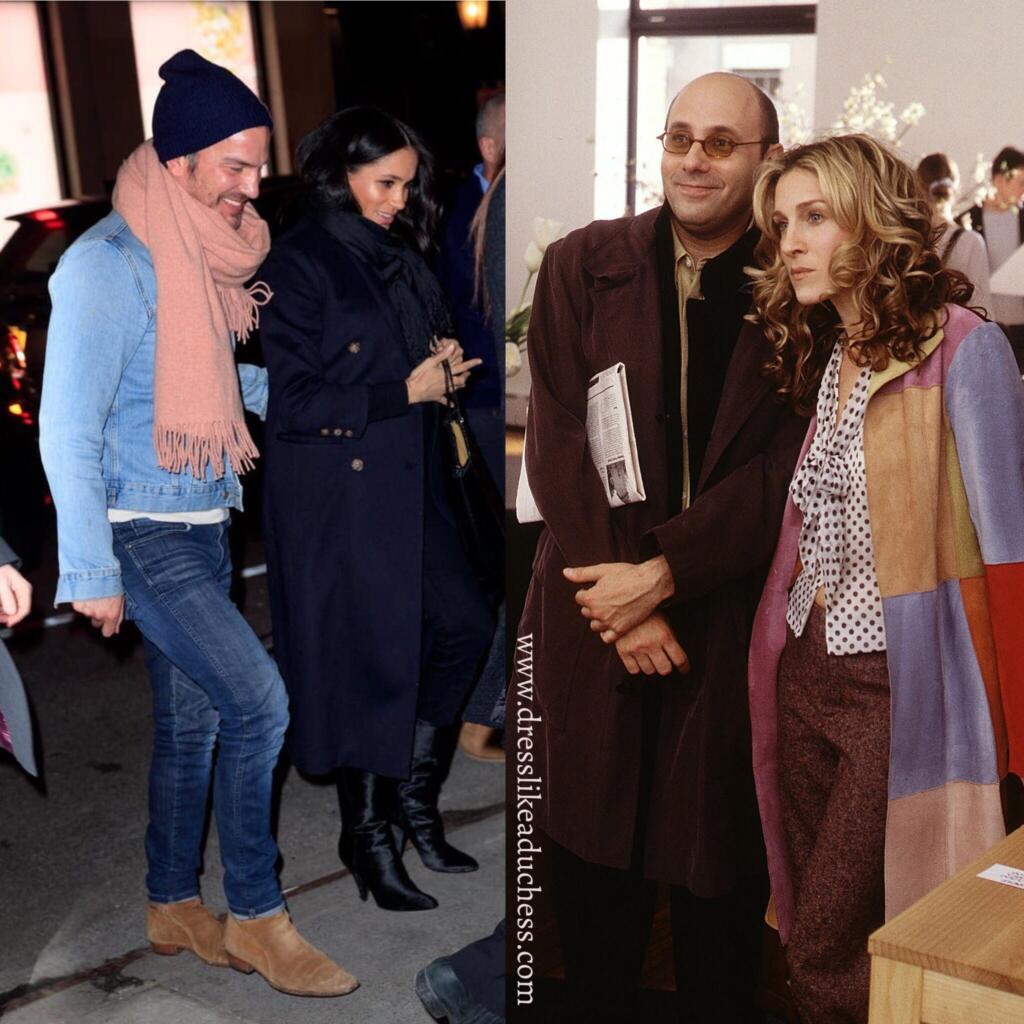 Charlotte Goldenblatt lived like a Park Avenue Princess with a ritzy apartment and tons of fancy clothes and furniture. Kristin Davis’ character had a privileged upbringing in Connecticut not unlike Jessica Mulroney who is an heir of the Brown Shoes Empire and grew up in Canada. Meghan’s stylist and unofficial bridesmaid seems to have had Charlotte moment in the snowy streets of NYC. 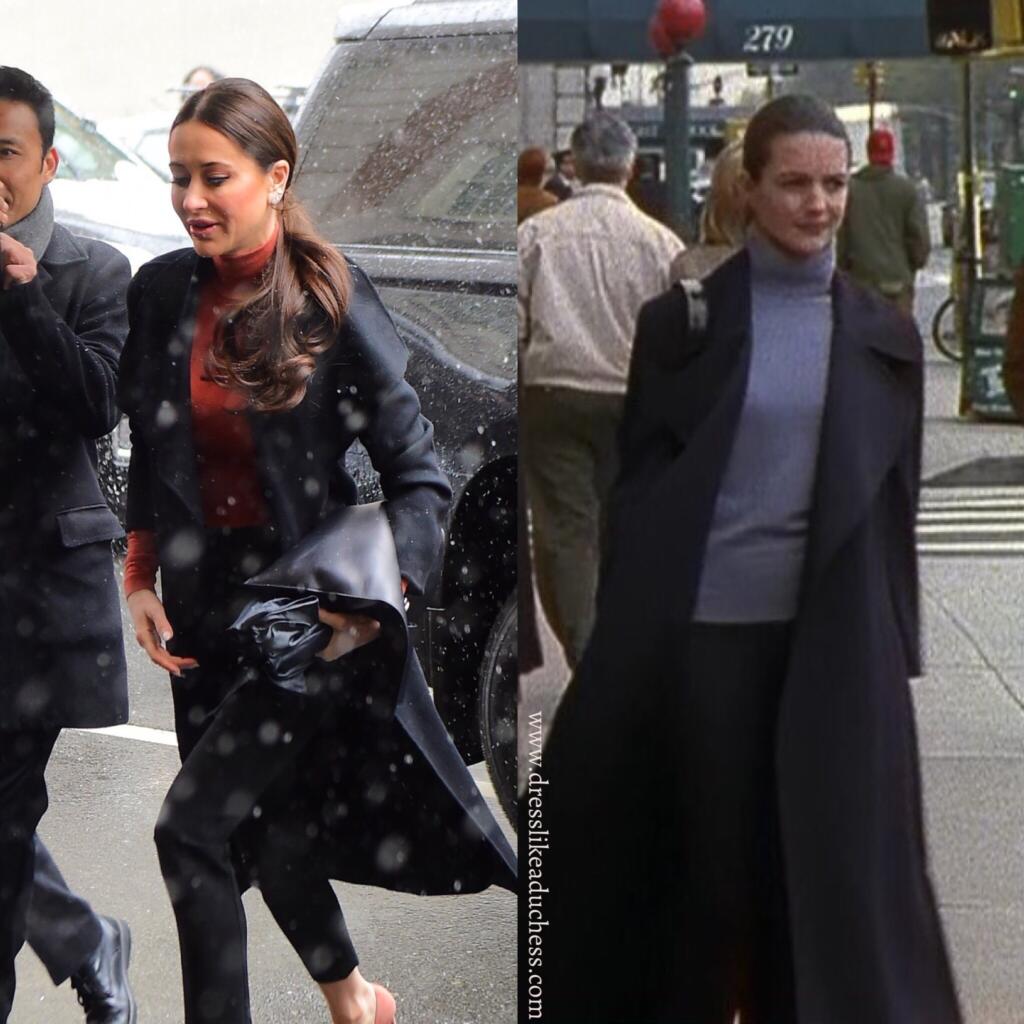 Even more proof Jessica Mulroney and Charlotte Goldenblatt are IRL/fictional style sisters. Mulroney wore a houndstooth coat over black pants for a night out at the Polo Bar with Meghan’s tribe of pals while Kristin’s character donned a similar print for meeting up with Carrie and company. 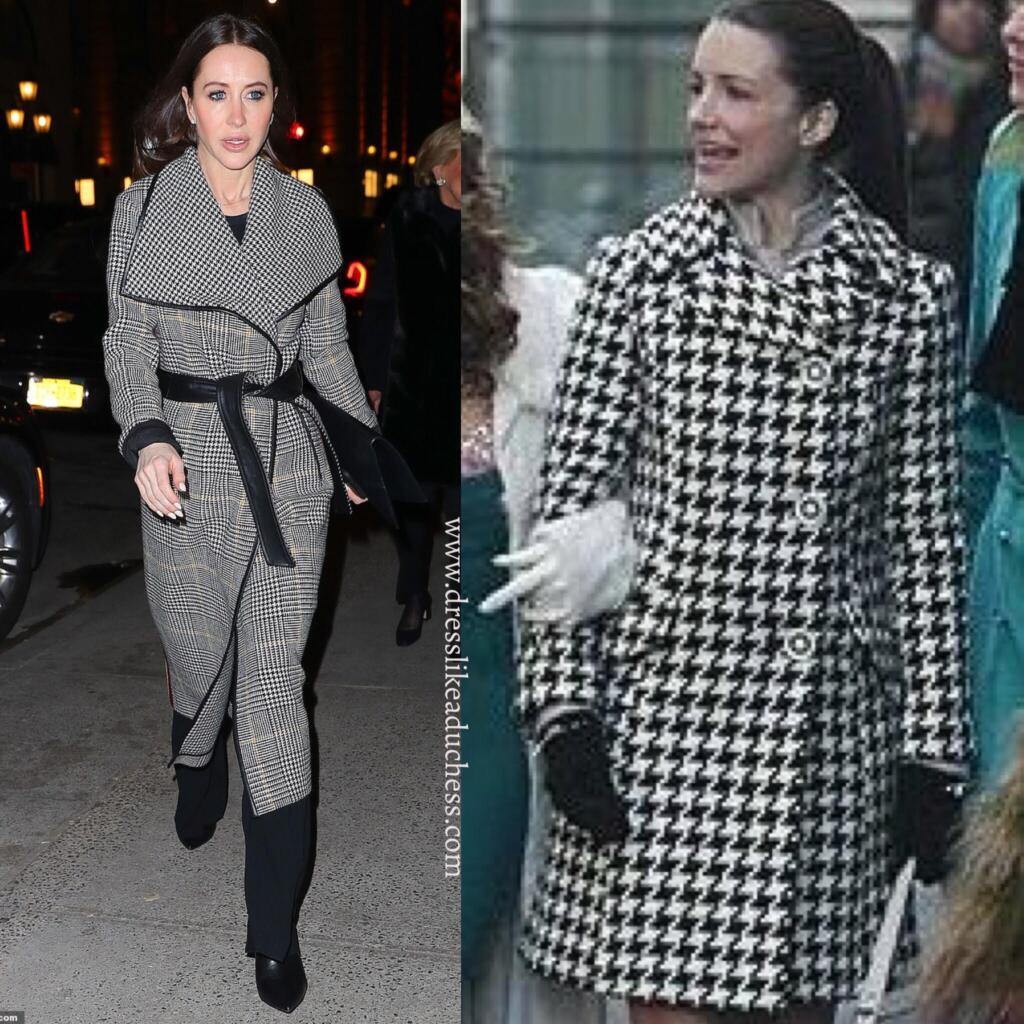 Serena Williams took some time off the court to steal a night away in the urban jungle with Meg’s mob but it seemed like she was part of a real movie as her plaid ensemble closely resembled that of Louise (played by Jennifer Hudson); Louise had a pivotal role as Carrie’s assistant and romantic advisor in the big screen edition of the show. Meghan has reportedly sought Serena’s advice on a number of occasions. 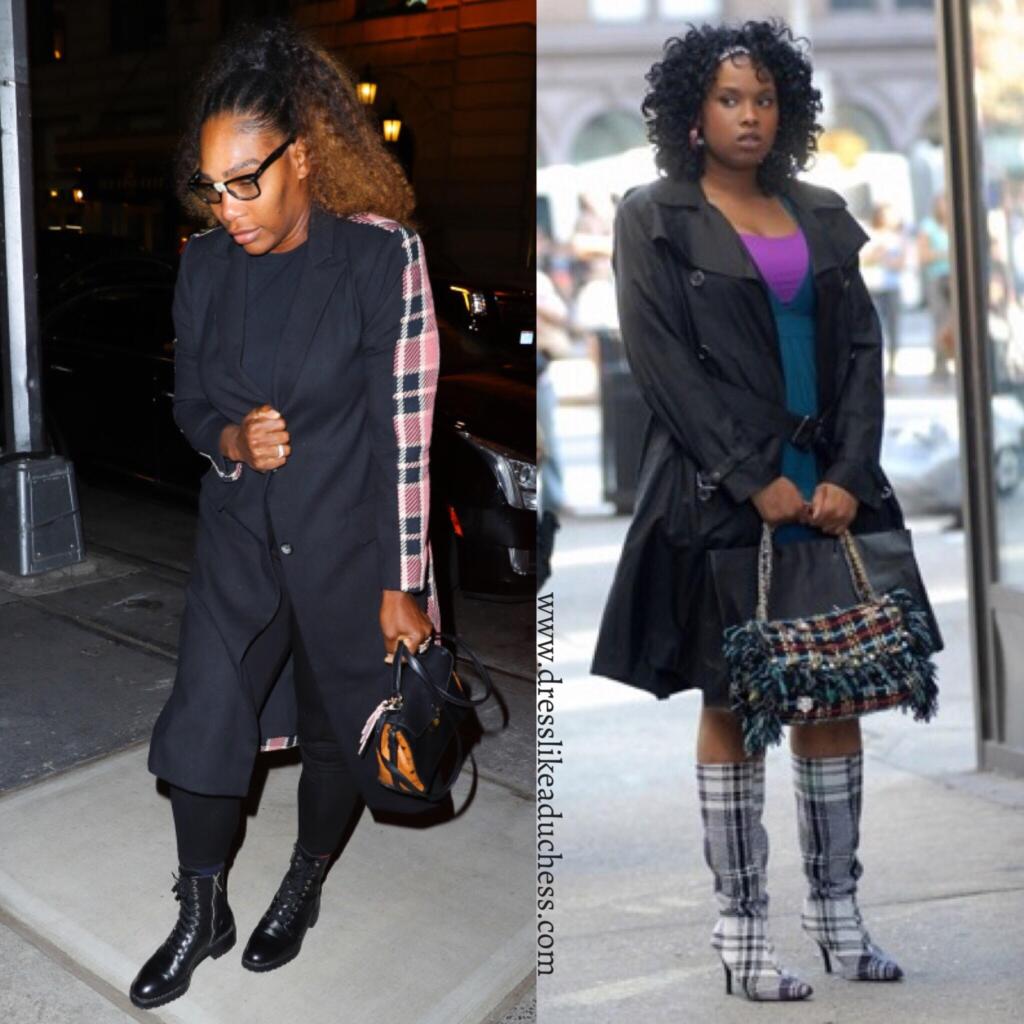